“Me Too” Founder Visits Wake Forest 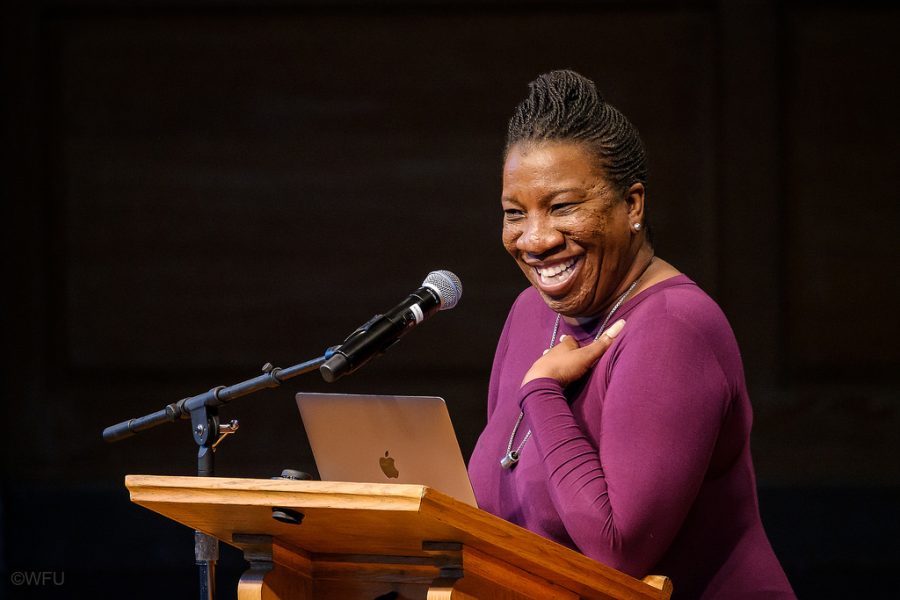 Twenty minutes before she addressed the crowd in Wait Chapel, Me Too movement founder Tarana Burke was named The Root’s most influential African American of the year. With an audience packed full of students, staff and community members, Burke took the stage on Sept. 25 to tell the story of her life, explain the movement she created and give context to her number one position on The Root’s list.

After joking about beating Cardi B and Beyoncé to the top of the lineup, Burke began her speech by describing how her family helped to shape her understanding of the world at a young age. She emphasized her strong roots, noting that her mother supplied her with black feminist literature and her grandfather supplied her with history.

“All the things that my grandfather and mother gave me were enriching, they allowed me to identify injustice,” Burke said.

Burke joined the 21st Century Youth Leadership Movement during high school. At the age of 15, she began her career as an organizer by protesting events like the Central Park Jogger Case.

After graduating from Auburn University, Burke worked at 21st Century and created relationships with many of the children. During group conversations, Burke said that it was common for young girls to discuss or hint at their experiences of sexual violence.

One day, Burke was approached by a young girl named Heaven who proceeded to reveal that she was being sexually assaulted by her mother’s boyfriend. Instead of helping her, Burke shut down and informed Heaven that she was not the right person to tell.

“She walked away and in my mind I thought, ‘This happened to me too.’ That’s what I wanted to tell her, it didn’t feel like enough,” Burke said. “[After], I realized that was the only thing to say.”

At that point in the speech, Burke revealed that she was raped at the age of six.

SAFE Office Assistant Director Steph Trilling discussed during an interview that more than 1,200 people registered for the event. She said that the sheer number of individuals interested shows victims that if they wish to open up about their experiences, they have community support.

“Tarana Burke is a survivor, and not only has she healed and is resilient and a role model to so many people, but she actually built a movement for other survivors to find one another and to heal,” Trilling said. “I’m hoping that the student body takes away that survivors are brave, are powerful, and that they’re not alone.”

Once she detailed her life prior to founding Me Too, Burke shifted gears to discuss the evolution of the movement since its 2006 conception.

Burke realized that many children, especially young girls of color, were not equipped with language to discuss their experiences with assault and begin the healing process. So, she created a MySpace page that outlined how to help younger individuals and started public health workshops within her community.

Described by Burke as the “first viral moment” of the movement, women around the country began to contact the MySpace page saying that they too were survivors of assault who wanted to heal. Although her tools were not catered towards adults, Burke said she was able to seamlessly reorient the page for these women.

Following the explosion of Me Too in October 2017, Burke said she was nervous about the movement being misconceived by the media. She highlighted that the goal was not to bring down people in power, which is often what is construed by the media, but rather to provide a place for survivors to “tell their truths.”

According to Burke, this clarification is especially significant now, with recent high-profile events such as Bill Cosby’s prison sentencing and the emergence of Christine Blasey Ford, who accused Supreme Court nominee Brett Kavanaugh of sexual assault.

“If you don’t take anything [else] away from tonight: you cannot let the media create or decide what the narrative for this movement is,” Burke said. “We get to define that. If you let them define it, people get left out.”

For emphasis, Burke compared 12 million people getting a disease to the 12 million people who used the Me Too hashtag. According to her, society needs to treat these experiences like it would an epidemic and remember that “every hashtag is a human being.”

Burke ended her talk by relating the movement to the conversation about preventing sexual assaults on college campuses specifically. On Wake Forest’s campus, there were seven incidents of rape reported in 2017, according to the Crime and Fire Report. More recently, the school received a “timely warning” email about two anonymous sexual assault reports that occurred last week.

While researching Wake Forest, Burke came across the motto “Pro Humanitate” and remarked on its uniqueness. Directly addressing the administration, Burke asked them to consider if sexual violence on campus reflects Wake Forest’s motto.

Conversely, Burke spoke with fervor about the importance of students owning their voice in the conversation of sexual assault prevention.

Although her name is positioned next to the “#1” on The Root’s list, Burke asserted that the movement is not about her sole experience, but it is about young black girls, the significantly affected transgender population, marginalized groups and the people who sent the hashtag in hopes of beginning to rebuild themselves.

“Let’s work together, let’s heal together,” Burke said. “If you are ready to do that work I can only leave you with two words: me too.”