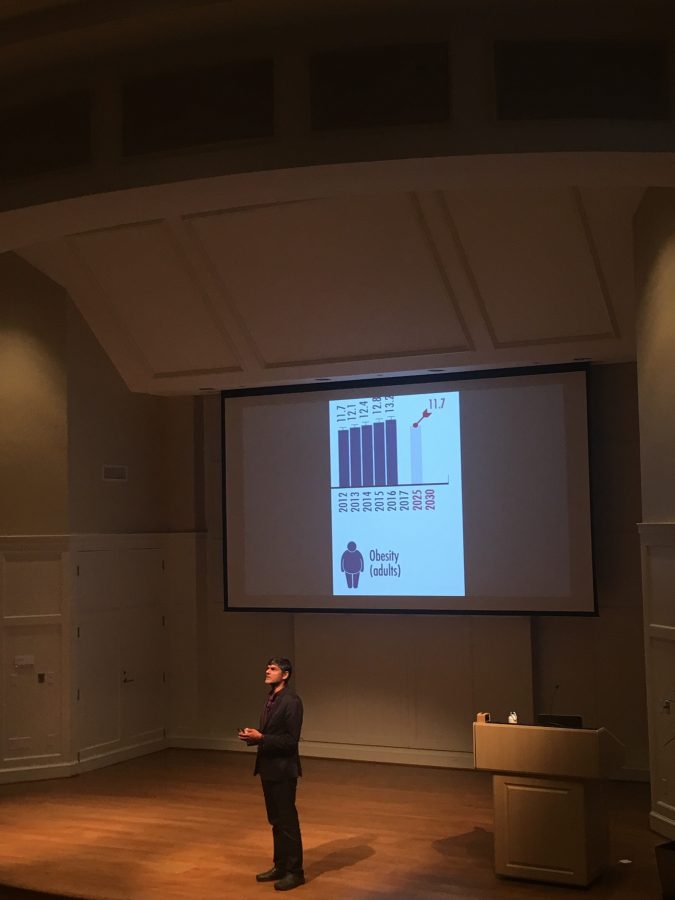 Renowned writer and social activist Raj Patel, author of The New York Times best-seller The Value of Nothing, spoke at the Porter B. Byrum Welcome Center on Sept. 19. A research professor with the Lyndon B. Johnson School of Public Affairs at the University of Texas at Austin, Patel has analyzed the global systems by which food is produced, distributed, prepared, and consumed.

His address, titled “The World That Food Made,” was concerned with both the pervasive issue of malnourishment and the epidemic levels of obesity. Patel sought to address the multi-faceted nature of global food systems’ failures and its roots in sexism and inequality.

Speaking with an energetic liveliness, Patel began by demonstrating the paradoxically simultaneous rise in global obesity and malnourishment. Underlying this issue, Patel proposed, is the capitalist system and the changing climate which brought it about. Citing the cheap production of genetically-engineered food, the exploitation of cheap labor resources, the cheap healthcare afforded to the aforementioned labor force, the cheap energy produced by fossil fuel and the cheap money created by the unsustainable low-interest loans granted to many fast food franchises, Patel concluded that capitalism, with its roots in sexism and exploitative labor practices, is to blame for the increasingly disparate allocation of food resources world wide.

The food industry, in addition to being inequitable and damaging to many populations worldwide, is also largely unsustainable due to apparent unprofitability.

Patel suggests this to be of great concern if a more sustainable future is ever to be achieved. Adopting a more optimistic approach, he proceeded to discuss the means by which change can be affected, showing demonstrative footage from his current documentary project. Oddly, the first step in mitigating the vast issues of malnourishment facing the third world could be undermining the patriarchy.

Patel stated that, even when food production in impoverished regions is bolstered by diversified crop production and optimized agricultural practices such as by his own efforts in Maloui, Chad, childhood malnourishment remains constant and high. To blame for this, he stated, is the societal role of women in many traditional areas. While serving simultaneously as childbearers, educators, overseers of domestic chores and food providers, as well as leaders of independent social lives, cooking nutritious meals often falls through the cracks. To mitigate the time crunch and undermine this patriarchal structure, Patel and his team spent time teaching males in Maloui how to cook. He developed events called Recipe Days which celebrated male cooking and offered a medium for men and women to exchange recipes and advice. After fostering a more equitable distribution of household roles, Patel found that childhood malnourishment in the particular village he worked in dropped significantly. According to the documentary, many men remained skeptical of the program. One expressed worry that his friends would see him cooking and think less of him thereafter.

That the act of cooking is so strongly connected to femininity that some men are hesitant even to attempt it reflects the importance of undermining patriarchal notions of masculinity in the pursuit of mitigating global malnourishment.

Senior Jay Thompson mentioned he was appreciative of the “community coming together to talk about sustainable practices and global food issues on a broader scale,” adding that it “was nice to see a worldly perspective — stuff outside the Wake bubble.”

Patel concluded his keynote speech with a question and answer session, in which he discussed the financial benefits of investing in socially positive cooperatives and his stance as being pessimistically optimistic regarding the pursuit of a sustainable and equitable future.

Patel is presently working with esteemed director Steve James on “Generation Food,” a documentary focused on the reforming the global food system.

Following the question and answer session, Patel personally met with members of the audience, engaging in further discussion of the global food systems’ failures and signing books.