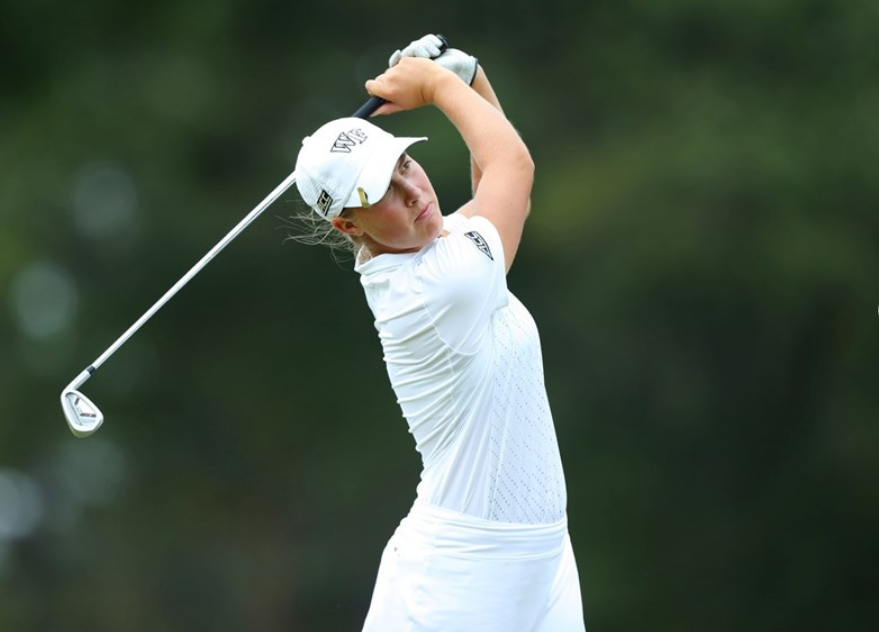 She excelled during her college years, setting the school record for golf scoring with an average of 70.61, winning three titles. She broke her record her junior year, with a 70.60 average. She also became an NCAA champion.

Will May: How do you feel about the team’s performance at the Mason Rudolph Championship last week? Are there any major takeways that you would like to share?

Jennifer Kupcho: Yeah I think our team played really well. Both myself and our top two players are playing really well right now, so I think it’s a good start for the team.

The only issue is that our freshmen are struggling a little bit. I think it’s just kind of a freshman thing, they always struggle with adjusting to school and everything when they first come in. I think they’ll start to get a hold of everything and figure things out, and then as long as the three of us keep playing well I think we’ll be really good later in the season.

WM: Do you have any major goals for this season?

JK: Since I’ve been here I haven’t made it to nationals with the team. I think that it would be super cool to get to nationals as a team, and that’s our main goal.

For myself, I’m kind of looking past college, as I’m trying to go pro by going to qualifying school in October, so I’m focused on that individually, while also helping my team the best that I can.

WM: What is the greatest challenge you’ve had to face during your career as a student-athlete?

JK: Probably my freshman and sophomore year, actually. I kind of had a hard time adjusting in general. I didn’t really get along with the team so I had to find other friends. I think that probably was the hardest part because I wasn’t really social, but I’ve learned a lot and become more social since then.

Now it’s just great because I’ve changed so much since I came here freshman year.  I think that was my main challenge. I love Wake now, it’s just great. But those first couple of years were a little rough.

WM: Do you think this changed you a great deal as a person?

JK: I think it has changed me a lot, and I think it’s a lot better now. I’m a lot more outgoing and talkative now, so I think I come across as more of a friendly and laid back person now.

WM: Can you think of any advice you could impart to a freshman student athlete in a similar position?

JK: Yeah. You don’t have to always get along with your team. You have to get along with them so much, but your team doesn’t have to be your best friends. If you just go outside of your comfort zone, you’ll find that it’s great and you can learn a lot from so many people.

WM: A pretty high percentage of the team is graduating at the end of this year. Keeping that in mind, how do you see the immediate future of the team being?

JK: We do have a lot of girls graduating. I was the only senior at the last tournament; the other two girls are really good, they’re competing for the fourth and fifth spot, but the freshmen beat them out. Even losing us, I think the team’s still going to be really good. They have a really good recruit coming in next year that actually plays a lot like I did my freshman year, so I think she’ll be a really good replacement for our class.

WM: Could you tell me a little bit more about your post-grad aspirations?

JK: I’m going to qualifying school in the fall. It’s just like another tournament, but it’s eight days long instead of three. So I’m going to go to that, and depending on the results I’ll either go to the lower tour or the OPGA.

We’ll see how it goes, I’m still figuring things out, so I’m not sure of much beyond that at this point. I’ll figure it out!