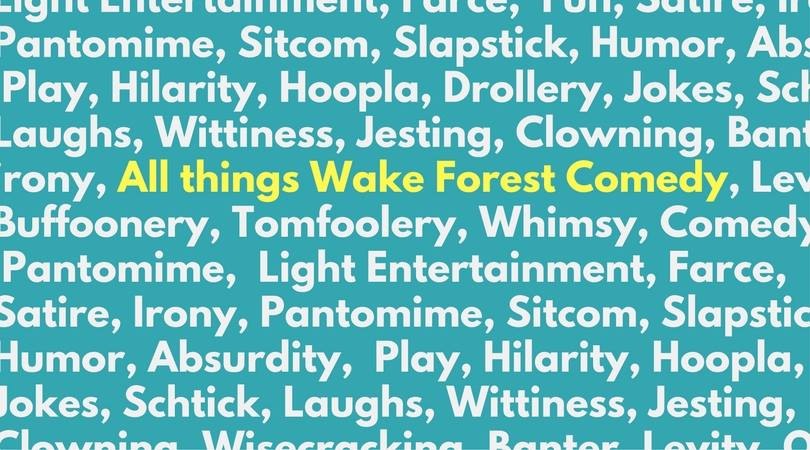 Wake People Laugh hosted its first comedy open mic night of the year on Tuesday, Sept. 25, and the stand-up scene is off to a robust start. Unabashed comedy is something that has been notably lacking on college campuses in recent years, with famous comedians Jerry Seinfeld, Chris Rock, Judy Gold and Patton Oswald, among others, halting performances at colleges.

A comedic resurgence is desperately needed, and local comics David Deckareaux, Dejahzh Hedrick, David Goolsby and Sebastian Rodriguez, as well as senior Maggie Powell, exhaled life into this revival. These comedians usurped the ever-quiet coffee shop and turned it into their stage. Hilarity ensued.

Powell kicked off the evening with a bit on the fallacies of progression when we are faced with the same Tuesday every week and then went into an all-too-familiar replication of the woes in awkward small talk — how the conversation inevitably shifts to comments on the weather and develops into progressively more detailed observations until one party makes the unavoidably abrupt exit. The highlight of Powell’s performance was her observations on complimentary head massages during visits to the salon. Powell spoke about how enjoying it too much can be strange (“Should I moan a little?”), but that you also don’t want to act disinterested. Powell ended with a callback to her Tuesday bit, which was fantastic, and her crowd work throughout was phenomenal.

Rodriguez then took the stage with a no-holds-barred set that began with a bit on the question all college students will be confronted with at some point in their studies: “Why do you study?” The bit ended with a twist of unexpected dark humor that remarkably showcased his unreserved, confident aura. Rodriguez went on to note how “you never really notice crackheads doing good deeds for crack” and ended his set with jokes on the unwanted omniscience of the deceased.

Deckareaux followed, and he wasn’t afraid to poke fun at his Southern heritage and the state of public education. Deckareaux’s bit on Italian pasta dishes as policemen had the room in stitches, but the true pinnacle of his set came with his thoughts on having anxiety. He explained how he gets “instant replays of all [his] interactions”— something that is ever-relatable in today’s society. Deckereaux ended his set with a hilarious impression of Bernie Sanders ranting about the one percent of germs unaffected by hand sanitizers.

Next was Goolsby, whose set was far too relatable to anybody who has tried to lose weight. Goolsby articulated his largest issues with weight loss.

He went onto comedically touch on the hardships of having a feminine figure, weary knees and soft hands. The apogee of his routine arrived when analyzing the differences in overweight-supportiveness between male and female friends, noting that his male friends were remarkably blunt: “Yo son, like, you gonna die — like today. Hearts working hard as hell.”

Hedrick wasted no time in his performance, telling the nearly all-white audience that he would “take it easy” on them, because he knew they were “not used to cheering for black people that didn’t just make a three-pointer.” Hedrick followed this with some playful banter directed at his friend Goolsby and ended with a bit on playing a pretend firefighter as a kid, stating, “I was realistic too, I didn’t always save people — sometimes you’re too late.” Hedrick went on to describe a (pretend) firefighting mishap that still haunts him, where he was unable to rescue someone, joking that “the autopsy showed I failed to rescue two people that day,” how he developed a “pretty serious sippy juice drinking problem,” and eventually found himself “sitting at the edge of [his] racecar bed, chain smoking candy cigarettes, with a super soaker pressed against [his] head.” The coffee shop roared with laughter. Hedrick demonstrated his ability to win over a crowd and keep them under his thumb throughout the performance.

An important item to keep in mind is that any joke transcription or description cannot parallel the actual delivery from Tuesday night. Timing, emphasis, tone, body language, and much more are aspects of stand-up comedy that that cannot be adequately displayed in a written format. So to get the true experience, go out and see these comics live next time they perform — I certainly will.