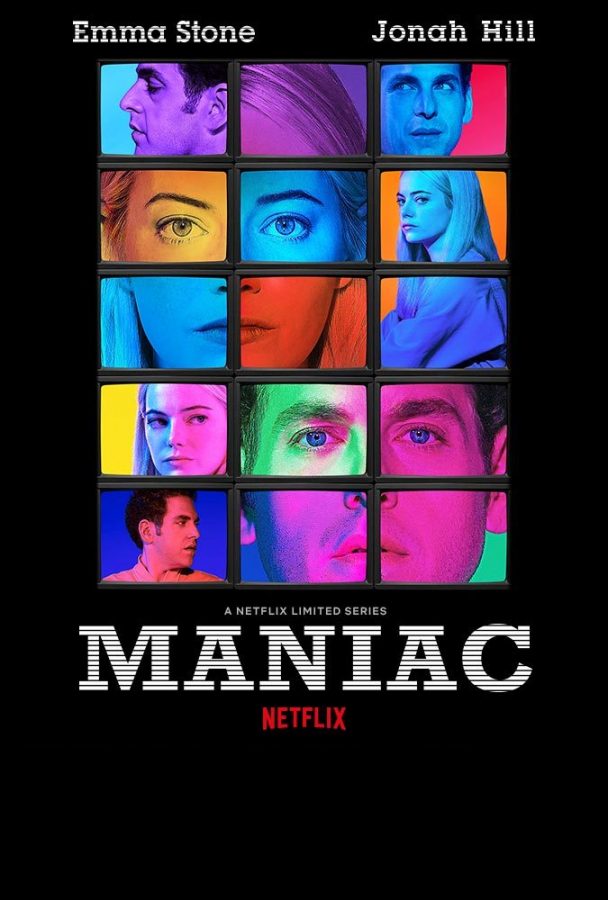 Maniac is the result of what happens when two beautifully flawed characters, drugs, a group of scientists and unlikely yet perfect coincidences occur to create a story about family, friendship and forgiveness.

It is, at its core, a story about a psychoactive drug trial, but in itself feels like a fever dream of drugged up mixed reality. The mini-series became available on Netflix last Friday. It stars Academy Award winner Emma Stone opposite Jonah Hill, as the two lead characters Annie and Owen ,respectively. It is set in a slightly dystopian retro-futuristic New York City, where consumerism and capitalism reign.

This is a story built in layers, and with each minute that passes another layer reveals a new detail. First we follow the family lives of both Owen and Annie. The former is pressured by his family into lying for his brother in a sexual harassment trial while privately suffering from hallucinations due to his schizophrenia. The latter is addicted to the drug for which she later enters the drug trial to keep a constant supply. Jonah Hill gives a career best performance as a man who cannot distinguish between reality and his own hallucinations.

Second we follow the scientists behind the drug trial, Dr. Azumi Fujita (Sonoya Mizuno) and Dr. James Mantleray (Justin Theroux). Mantleray has spent his career developing the AI computer GRTA, or Gertie. However, Fujita programs the computer to have feelings, and to empathize with the subjects of the drug trial so as to not continue to render them catatonic. Due to unforeseen circumstances, Gertie becomes depressed, and with her newly bestowed emotions begins to wreak havoc on the lab and within the drug induced “reflections” of the subjects.

Finally, there are the “reflections” themselves. Each reflection has its own story and plot, with Annie and Owen’s own psychosis becoming intertwined as they start appearing in each other’s hallucinations. Each dream and story adds to the chaos of the plot, while simultaneously folding in details that make each turn the logical next step.

These facts add facets to the story that give the audience its own perspective. While Owen and Annie sink deeper into their hallucinations, the audience watches as Fujita and Mantleray struggle with their control of Gertie. But as the scientists lose control of the computer, the test subjects gain control over themselves within the computer. The new radical drug being tested is known to be of high risk to participants, although it promises a much greater reward. The drug guarantees to completely cure the user of any problem that plagues their mind.

The consumerist society in which the series takes place would be the perfect place to market such a medication. The concept of a one-size-fits-all, quick-fix pill is radical in itself because in reality such an easy out is nonexistent. The characters cling to the potential and possibility the trial provides.

For Owen, it would mean independence from his schizophrenic hallucinations. For Annie, it would allow her to finally move on from the death of her sister. For Mantleray, the success would validate his ego with professional success unrivaled before. Finally, for Fujita, the potential the trial has to help eliminate suffering motivates her efforts.

Visually, the juxtaposition between the sterile environment of the lab and the luscious dreamscapes of the “reflections” mirrors the differences in personality of the characters within them.

Through his shared hallucinations with Annie, we see Owen’s aching desire to be the hero of his own life, no longer restricted by his mental disorder, which is why he consistently tries to save Annie from her own self-destructive nature. This is why, in the final episode of the show, we watch as Annie attempts to save Owen from himself. Their roles are reversed in a symmetrical conclusion that leaves the viewer with the sense that everything has fallen, if sort of haphazardly, into its rightful place.