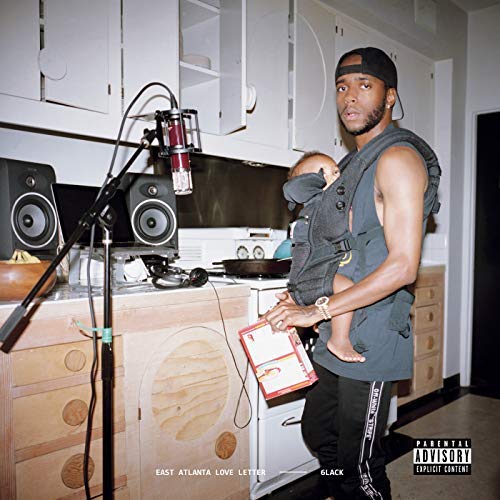 East Atlanta Love Letter is the second studio album from Atlanta-based trap/R&B singer 6lack. If you’ve heard of 6lack before, then you largely know what to expect from this project. 6lack has successfully carved out his sonic niche alongside contemporaries such as Bryson Tiller, Russ and Tory Lanez.

His beats borrow heavily from traditional rap, with predictable hi-hats and bass lines buoying the rhythm of his tracks. These elements help support minimal and distorted melodies that round out his songs. As far as singing, 6lack employs a very distinctive croon that fits in neatly over the instrumentals. His tracks are definitely easy to listen to, but also are not pushing any boundaries.

Lyrically, 6lack’s bars very quickly become repetitive and monotonous. After hearing a couple of songs about heartbreak, you’ve pretty much heard them all. 6lack does employ clever juxtapositions between the violent diction of his native streets and the serendipitous messages of love and loss that he discusses, but even this only feels fresh for so long. It works very well on the title track with the artist belting:

Nobody because I say so

One area that East Atlanta Love Letter truly thrives in is its features. 6lack manages to recruit fan favorites J Cole, Offset and Khalid, who all deliver solid additions that help break up some of the blandness of the later cuts. On “Pretty Little Fears,” Cole delivers a verse on top of a particularly bouncy beat that hearkens back to his guest verse on “Warm Enough” from Donnie Trumpet and The Social Experiment’s Surf. This verse is a breath of fresh air from the melodramatics that bog this album down.

While the features are shining moments in the project, this detracts from 6lack himself. It does not bode well for his album that these guest artists are so easily able to outshine him in his own work. They add something distinctive and refreshing to the mix and it ultimately feels like a letdown when their songs come and pass. 6lack does not do enough to set himself apart lyrically or instrumentally and pays the price for this unoriginality.

Ultimately, East Atlanta Love Letter registers as largely forgettable. It doesn’t do anything to define itself outside of its narrow genre and it seems as if 6lack is content to deliver similar projects to satiate his fan base.

However, if you’re one of the people that enjoys this new wave R&B, then it’s a solid addition to that style’s canon. Furthermore, if you’re looking for moody music to listen to in the car at night, this album would be an excellent choice. It delivers enjoyable, syrupy instrumentals and lyrics that do not demand large amounts of attention. Thus, while a solid choice for background music, this album will likely not see much staying power in the musical world.