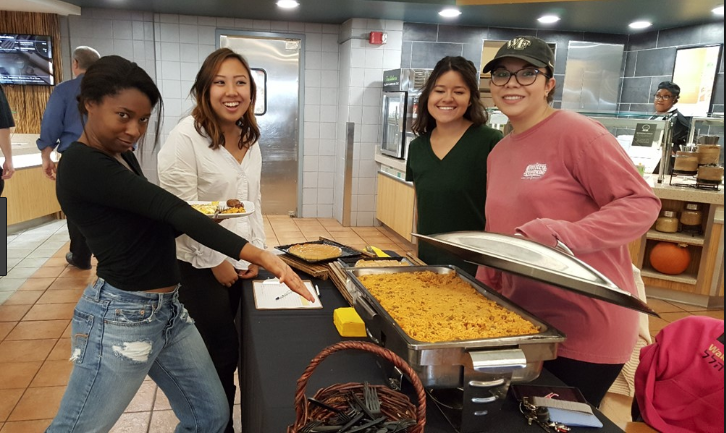 The Global Food Committee aims to improve awareness of the 37 countries and 21 religions represented on the Wake Forest campus.

Since the second week of classes, the committee has set up a small table in the back of the main dining hall on every other Wednesday. The goal of the Global Food Committee is to increase student appreciation and recognition through the sharing of delicious food.

Ironically, it was also the Jewish students who sparked the idea for the whole Global Food Committee. In the spring of 2014, some Jewish students made the point that they wanted matzah (unleavened bread) in the Pit in order to observe the holiday of Passover. So, they reached out to Gail Bretan, Program Director of Jewish Life.

“When they came to me, I reached out to Aramark, which is now Harvest Table, and we had a meeting,” Bretan said.

Bretan was able to fulfill the Jewish students’ requests and now matzah is served in the Pit during Passover. After that accomplishment, more people wanted to join in on the action. The committee grew and Bretan donned a new title of Chair of the Global Food Committee.

With the help of Harvest Table Culinary Group and the Fresh Food Company, the Global Food Committee is now able to offer several delicacies originating from several parts of the world. In past weeks, the Muslim Student Association (MSA) has served halal Pakistani biryani and the Asian Student Interest Association (ASIA) has served moon cakes. In the future, the committee has plans to offer opportunities to try Mexican stew sponsored by the Organization of Latin American Students (OLAS) and jollof rice and halal chicken ayilata sponsored by African and Caribbean Student Association (AfriCaSA).

This week’s blintzes were sponsored by Wake Forest University Hillel. Blintzes are small, thin pancakes wrapped around various sweet fillings, similar to the French crêpe. According to Bretan, they originated in Poland before being brought to the United States.

Several students stopped by the station during lunchtime to try the exciting new cuisine. For some a blintz was familiar and it was appealing to see them offered, and for others a blintz was completely foreign, yet it was intriguing to try a new food.

Freshman Ben Remis said, “I have had one before, and they are normally pretty good. I was excited to try it again.”

Another student that stopped by the table was freshman Ishani Kumbar. Kumbar had never tried a blintz before and was eager to dig in. After her first bite she said, “It tastes good! It’s a nice balance that has a warm cheesy inside, but a nice tart edge to it.”

Also, many students are pleased in the steps taken to improve the student body’s awareness of the different religions and cultures represented on campus.

Caleb Ohara, a senior that stopped by at the table, said, “Wake Forest is one of the few places that such different people will be brought together in the same place, so it’s essential that we have the opportunity to learn about our different backgrounds.”

Through their experiences trying the new foods, students marvel at how delicious a food they have never seen before can be.

“It’s great that there are places on campus using food as a means of bringing people together to learn about our differences in a positive manner,” Ohara said.

At the tabling stations, people start talking to each other and learn about differences in their traditions. One meal may be extremely common for one, but very peculiar to another.

“It is interesting to see. Many people have never tried a blintz, but for it me it was one of my first foods,” Bretan said.

The Global Food Committee does not just promote these tabling stations; they also advocate for dining services to accommodate for other culture’s tradition meals.

“The whole idea is people may have biases and prejudices about culture or religion,” Bretan said. “However, when they share a food they open up about their own culture and can have a personal experience.”