Navigating The Flu On College Campuses 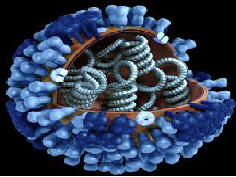 College is already a hot spot for illness because students from many different areas live in close contact, but right now, during flu season, it becomes vital to keep oneself from getting sick.

The flu spreads quickly on college campuses and it is easy to contract. Caused by different strains of the influenza virus, the flu enters the body through the respiratory system and attaches to cells using a surface-protein called hemagglutinin (HA).

Once attached to your cells, the virus slips inside and releases its genetic content, RNA. Cellular machinery is then transformed, resulting in the production of more influenza viruses.

Another influenza-surface protein called neuraminidase (NA) releases newly-formed viruses from an infected cell. This continues until the immune system has the strength to fight the virus off, which can take some time if one doesn’t already have some immunity through prior exposure, like through a flu shot.

Once you have the flu, the symptoms are similar to that of a severe cold coupled with a fever. These symptoms are a result of your body attempting to rid itself of the virus, and they include coughing, sneezing, congestion, body aches, increased body temperature and tiredness. As a college student, you are likely in a perpetual state of tiredness, so it might be a good idea to visit Student Health when you feel a combination of these symptoms. While there is no treatment other than waiting for your immune system to fight the virus off, the medicines you would normally take for a cold can help lessen the severity of the symptoms. While recovering from the flu, you will need plenty of rest and a surplus of water.

Of course, we would rather never get the flu in the first place. It is important to have multiple defenses against illness, but some are more effective than others. For example, to everyone that takes Emergen-C religiously this time of year, it’s best to realize that it is probably not a strong defense on its own. While Vitamin C can help boost your immune system, your body can only process so much of a vitamin at a time. You likely get most of your daily percentage of Vitamin C from the food you eat, and any excess vitamins are just expelled from the body without providing any actual benefits.

A better option for boosting your immune system would be to get enough quality sleep, avoid stress and avoid alcohol. While those three things are probably not going to be consistent for the average college student, you should make sure that you do these things whenever possible.

Getting a good night’s rest can be difficult to prioritize, but it can save you missed class time later if it helps prevent the flu. Additionally, alcohol suppresses your immune system, so make sure to avoid being directly exposed to illness following alcohol consumption.

Washing your hands often or keeping hand sanitizer in your bookbag are some of the easiest things a person can do to avoid contracting the flu. If you do get sick, try to stay isolated as much as possible to avoid infecting others.

While all of these are important tips for staying healthy, the most effective thing you can do is to get your flu shot. Flu shots allow your body to build up some immunity to the flu virus before your body actually comes into contact with it and it is essential to get it because the flu virus mutates each year. Mutations often occur in the surface proteins of the influenza viruses, so the flu shot is adjusted each year based on new mutations.

This mutability is why you should get the flu shot every year even if you previously had the flu. Each year’s flu shot is scientists’ best prediction of what that flu season’s virus will be. This year, the CDC is supporting vaccinations for H1N1-like and H3N2-like strains.

So, if you missed the Wake Forest flu shot clinic, you should still try to get a flu shot before flu season gets into full swing. It’s a reliable way to prevent the flu and stay healthy this season.