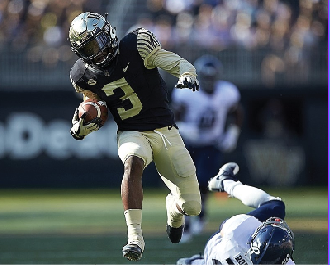 After back-to-back losing weeks and a pair of inconsistent performances, the Demon Deacons are back on the winning column with an impressive 56-24 win against Rice.

The previous week, the Deacs’ defense surrendered 56 points at home against a Notre Dame offense that, until that game, had failed to eclipse 24 points on the season. The offense, despite sustaining long drives, had problems translating those drives into points, as they settled and missed too many field goals.

However, that wasn’t the case Saturday against Rice. The 24,519 fans that attended saw a completely different Wake Forest team from the previous week. Despite an early punt, the Deacs scored touchdowns on five straight drives and jumped to a 28-point lead by the beginning of the second quarter. The defense also started out hot by forcing three straight three-and-outs to start the game.

At halftime, the Demon Deacons saw themselves at a comfortable 42-3 lead.

Clawson also recognized that Rice did not pose the same challenges that No. 6 Notre Dame did the previous week. However, he was still pleased with how well the defense improved on their alignments and scheme-execution.

“The important goal that we had [leading to the Rice game] was to have a 95 percent aligning rate. If we could just … have everyone playing the right defense 95 percent of the time, we thought we would have a chance to play better,” Clawson said at Tuesday’s press conference. “We graded out at 97 percent, which from the week before [against Notre Dame] was up from somewhere in the 50’s … It’s baby steps but it is a step forward.”

Those are definitely important steps for a defensive unit that just had its defensive coordinator fired due to poor execution. It will be interesting to see how this defense will fare against the upcoming stretch of seven-straight ACC games to finish the season. If the improvements are real or just a sub-product of playing Rice, might just as well define how far this football team can go in 2018.

On offense, the Sam Hartman-Greg Dortch connection was as lethal as ever. QB Sam Hartman had his most accurate game in his young career as a Demon Deacon. He finished with 15 out of 17 passes completed for 241 yards and four touchdowns. Hartman vastly improved his decision-making and accuracy running the RPO. It also marked the first game of the season in which Hartman did not commit a turnover.

“Everything was just clicking the way it was supposed to be. I thought we just did a great job on the offensive side of the ball,” Dortch said. “Everybody did their job and it paid off today.”

Coach Clawson mentioned that over the past few weeks, it has been necessary to be able to make more explosive passing plays and get some more easy yards to avoid having drives dragging down for too long. This definitely worked on Saturday, as out of Dortch’s 11 receptions four were for 25 yards or more.

Yet, not everything was marvelous for Wake Forest against Rice. The second half showed a Wake Forest defense content in riding on the big lead and with a lot of missing tackles and coverages as a result.

When asked if the defense was playing with a sense of more urgency than past weeks Clawson answered;

The Demon Deacons will most definitely need to put out one of their finest performances Saturday against No. 4 Clemson if they hope to upset the Tigers. Being able to replicate the discipline and effort displayed in the first half against Rice is a must throughout the whole game against Clemson.

“We are playing one of the best teams in the country this week. We try not to talk about them. Our focus is us getting better. I think we improved from Notre Dame to Rice,” Clawson said. “Our alignments were better. We have to do a great week of practice. This is a great challenge, but we’re looking forward to it.”

Wake Forest will host No. 4 Clemson Saturday, Oct. 6 at 3:30 pm ET at BB&T Field. The game will also be broadcast on ESPN.