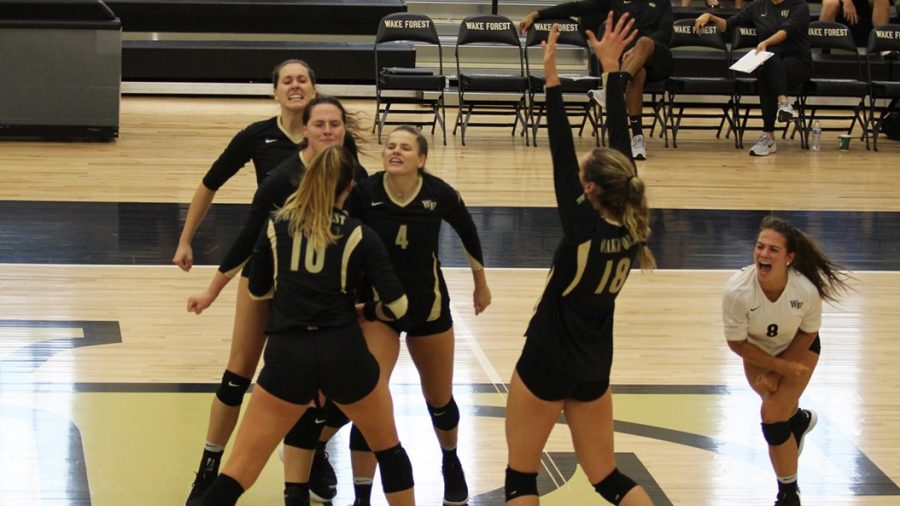 Wake Forest found themselves lined up against Syracuse in their ACC home opener Friday night. The Orange came into the matchup riding a three-game win streak after dropping only three sets combined to Iowa State, Georgia Tech and Clemson.

Syracuse took the first set 25-19, thanks to a 9-4 run in the middle of the set after trading points with the Deacons until 9-9. Wake Forest managed to grab the second set off the Orange, as sophomore defensive specialist Alysia Nielson hammered home a service ace to grab a 25-21 victory.

Syracuse hit a match-high 39.3 percent in the third set as the Orange worked their way to a 25-17 decision to take a 2-1 match lead. A 10-3 run secured the third set after breaking a 15-14 stalemate early on. Syracuse finally closed out the match in the fourth set 25-21 on the strength of 18 kills against just four errors.

Syracuse, which leads the ACC in blocks, posted 18 stops at the net and was led by senior middle blocker Santita Ebangwese, who finished with a team-high of nine blocks. Freshman outside hitter Polina Shemanova led the Orange with 21 kills. Syracuse managed to extend its winning streak to five games with its victory at Reynolds Gym.

Wake Forest then squared off Sunday afternoon against Boston College, who had previously lost three straight sets to Duke following a brief two-match win streak against Clemson and Georgia Tech.

Thus the stage was set for a dramatic fifth set. The Deacons, on the verge of starting their ACC season 0-4, fell behind early, yielding a 10-5 lead to the Eagles. Wake Forest battled back to tie the score at 12-12. The two teams traded points until the Eagles eked out a 19-18 lead before the Deacons fought for a 3-0 rally, securing the deciding set at 21-19 in front of a roaring crowd.

Wake Forest’s fans came out in full force to witness the stirring victory. Of the frenzied atmosphere in the building, head coach Bill Ferguson said, “Reynolds Gym was rocking today. This was really cool. I have heard all of the stories and this is why you come to Wake Forest: to get in this gym and have it rocking was really huge.”

Mitchell had an uncharacteristically quiet game for the Deacons, not posting a kill. Speaking on the team’s ability to step up, Ferguson said, “Boston College committed its whole game plan to scouting Myca (Mitchell) and they did a good job and Myca kept battling. We ended up putting Paige (Sebesta) in and Paige got some points for us and opened things up. Our defensive and serving specialists all came through and we are starting to get Katie Moore back in the mix. We got closer to being 19-strong again. It was really nice to get this win.”

Coming off this huge victory, the Deacons look to continue their streak on the road this weekend against ACC opponent Notre Dame 9-5 (3-1) on Friday at 7:00 p.m. before travelling to Kentucky to play Louisville 11-4 (4-0) on Sunday at 1:00. p.m.