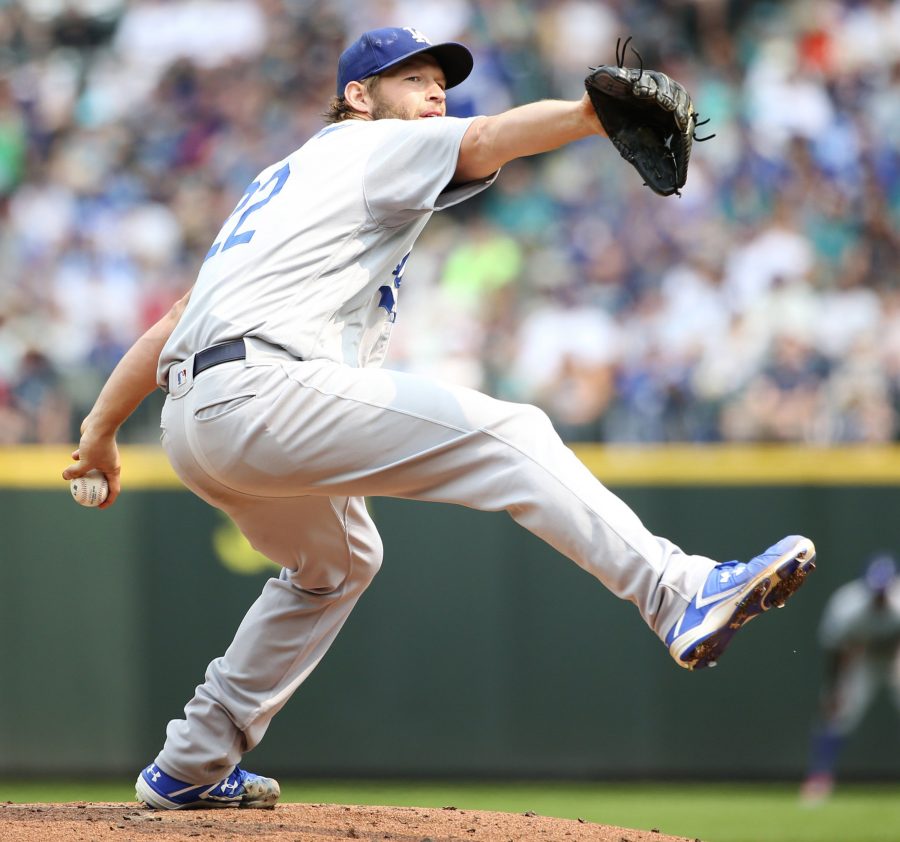 Los Angeles Dodgers starting pitcher Clayton Kershaw is on the mound in the first inning against the Seattle Mariners on Sunday, August, 19, 2018, at Safeco Field in Seattle, Wash. (Ken Lambert/Seattle Times/TNS)

The National League featured one of the most climatic endings to a season in recent history, as both the NL Central and NL West ended in a tie for first place, necessitating a game 163 to determine the winner in each division.

The extra day of baseball saw the Dodgers top the Rockies 5-2 and the Cubs fall at home to the Brewers 3-1, forcing the Cubs and Rockies into a second one-game playoff in the NL Wild Card game. The Rockies went on to upset the Cubs, who finished the season tied for the most wins in the National League.

With the Cubs out of the playoffs, an already wide-open National League gets even more unpredictable. Each remaining club faced a realistic chance of missing the playoffs at some point this season, and only the Atlanta Braves avoided the stress of playing an extra game at season’s end.

The American League’s unpredictability stems from the dominance of nearly every playoff team, and the National League’s uncertainty comes more from the glaring flaws on each playoff team’s roster.

Both of these teams did their part in forcing the Cubs to an early postseason exit and both teams performed convincingly down the stretch to earn an NLDS appearance. The Rockies went 9-2 in their final 11 games to force a tie in the NL West, and the Brewers won 10 of their last 11 counting their tiebreaker game.

On paper, the Milwaukee offense may be too much to handle for Colorado, and if Colorado’s bats perform like they have for most of 2018 (25th in team wRC+), the Brewers could cruise through this series. Brewers outfielder Christian Yelich became the NL MVP favorite after a monster September in which he slashed .370/.508/.804, good for a 240 wRC+, and his performance largely will dictate how Milwaukee fares in this series.

Colorado’s rotation, led by Kyle Freeland, who posted a 2.85 ERA in 2018, is what kept them competitive this season, and their starting pitchers will have to put on a show in October to keep the Brewers quiet offensively and take pressure off the Colorado offense.

This series is a tale of opposite teams. The Dodgers entered the season as reigning pennant winners and clear favorites to run away with the NL West, and the Braves entered the season in a five-year playoff drought with a less than one percent chance to win their division. While the Dodgers had to fight all season to maintain their NL West lead, the Braves’ young core powered the team to a division title with a week left in the season.

Though the Braves have an exciting narrative on their side, the Dodgers still enter as clear favorites. The Dodgers’ rotation features veteran ace Clayton Kershaw — who battled through injury to post a 2.73 ERA in 26 starts — and electric rookie Walker Buehler, who managed a 2.62 ERA and a 9.90 K/9, plus the Dodgers offense tied for the highest wRC+ in baseball.

Should the Braves compete in this series, starting pitcher Mike Foltynewicz must flash the elite talent he has shown at times during the 2018 season, in which he has posted 2.85 ERA and amassed 202 strikeouts. First baseman Freddie Freeman, the Braves’ offensive stalwart, cannot disappear in this series on offense, and big moments from rookie outfielder Ronald Acuña Jr., a superstar in the making, will be necessary for the Braves to compete in this series.

This matchup appears to be the most likely scenario for the NLCS, and also the most exciting. Both the Brewers and Dodgers can hang crooked numbers, and each boast offensive star power. The advantage in this matchup would swing toward the Dodgers, however, as the Milwaukee playoff rotation simply does not compare to Los Angeles’.

Milwaukee’s pitching key will be leaning on its starting pitching to post five solid innings before handing the ball off to the Brewers bullpen, led by lefty Josh Hader, who may be the best reliever in the National League. Hader finished the season with a 2.43 ERA and struck out 46.7 percent of the hitters he faced, and he is one of the few elite postseason bullpen options who can go multiple innings.

The Dodgers would have the edge in this matchup, however, and they appear well-positioned to make a run at redemption in the World Series.