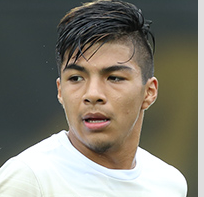 With eight goals and three assists through the first ten games of the season, Omir Fernandez is making a splash in his sophomore season for the Deacons. Hailing from the Bronx, Fernandez played for the New York Red Bulls Academy under Jeff Zaun. Two of his Wake teammates, Kevin Politz and Steven Echevarria, now play for the professional Red Bulls club.

Fernandez had a tremendous freshman campaign, earning ACC All-Freshman Team honors with 17 points on six goals and five assists. He came off the bench to spark the Deacons in all 23 games of his rookie season. This season, he already has 19 points through 11 games and looks to drastically improve his statistics in all categories throughout the rest of this year.

Samantha Wexler: The team obviously lost some great players after last season and had some great players come in as well. Can you speak to what it took to develop this year’s team chemistry to continue the success of the program?

Omir Fernandez: The team lost amazing players that have moved on to do bigger and better things, however that is the greatest part of Wake Forest. It’s a program that produces great players and great young men, but has great fire power that is ready to step up to make the team great. You may know that we had the 2nd best recruiting class coming in this year and [this class], even though they are young, are going to make an impact to the team.

We also have great young players and veterans in the team that were ready to step up and be important to the team. This program has been created and developed which harps upon being a family. As a team we know that being a family on and off the field is important which is why everyone is treated as family.

SW: Can you speak a little on the preparation that normally goes on in a short week with multiple games?

OF: [In the] fall season, we play multiple games a week in order to get all 17 season games completed. It’s something that we have to embrace and accept rather than complain. With having short weeks, recovery is the main thing. Taking care of our bodies after they go through so much is key for our teams success. We have amazing facilities… that we utilize in order to keep our bodies in good shape, as well as what we eat and how we spend our free time. [In the heart of the season], we don’t have hard practices after games but still practice because we need to get better. It’s not physically demanding however- but us players need to focus and… improve as a team. Lastly, watching film is always good. To watch our game or our opponents to be able to prepare and improve for the next game [is important].

SW: There has been a very high standard of play under Coach Muuss, what in particular does he bring to the program to continue this dominance?

OF: The way that he believes in us and the game that we play. We play a possession, pressing, non-selfish brand of soccer. He harps upon this style and he strictly implements this to us every day. We have all bought in to his philosophy and it’s why we are able to be successful, because we are all on the same page. We have so much trust in Coach Muuss with things besides soccer as well. He is a great adult figure for the team and makes life easier for us as players as well. He allows us to focus on our priorities and helps us with issues we may have.

SW: There are exceptional levels of former players in the MLS now, what is the culture of the program in terms of continued success after Wake?

OF: This Wake Forest Soccer program has created a powerhouse. As I see it, there are so many opportunities and doors that open by working hard at this school. With that being a career outside of soccer or a soccer career, the opportunities are great. The culture is a family so we are all happy for each others success and we work for each other to succeed. Everyone understands the opportunity we have and it makes us work hard. We want to continue to bring success to the program and set higher standards for the new faces the join the family. We are also excited for what the future holds for us and the team.

OF: My friends. I have great friends outside of my team and I appreciate them so much. They take me away from the soccer world and relive my mind. I have fun working on the field but my friends know my other interest and understand what I go through help me have good time outside the field. A shout out to the “ping pong squad” and “CALMA” (They know who they are) as they have been a great influence in my life. The soccer community as well. With the fans and alumni that support the team and school as well.They motivate me to work harder and it gives me pleasure when the team succeeds because these people have great pleasure with our success as well.

OF: The main thing was to build chemistry. In the summer most of the guys were already on campus and team chemistry is what we wanted to build. With many new faces and new players taking leadership [roles],  it’s [about] building new relationships and creating that family again. We [also] wanted to build fitness and conditioning. We would hit the field as a team and do fitness and play some pickup [games] to build relationships and condition because our coach demands lots from us during the season and we want to be prepared.

SW: What do they newcomers contribute to all sides of the team?

OF: I was once in their shoes and understand the transition to the college life. The new guys that we got are great. Off the field they are amazing guys to be around with and great to hang out with. On the field their actions speak for themselves. They all have contributed to the team’s success so far. Them coming in and playing in games and making an impact is huge for our team. For us to have the depth that we have is amazing and it gives us an advantage over other teams.

SW: What is the team doing to prepare for the fast pace ACC play in the coming weeks to ultimately continue the success through the tournament?

OF: We are working hard and working smart as well. We know the toll that the game has on our bodies and we know that we must stay disciplined. We are smart in a way where we try to limit outside distractions and focusing on the game. We are working hard as well as we practice a lot throughout the week and focus with the things that are asked of us. These things will make us a successful team in the long term.

SW: There is a bit of a pipeline between your Red Bulls club team, Wake Forest, and then continuing play there after school. How inspiring is it to have players that were at Wake with you having success at the next level?

OF: It gives you a drive to believe that there is a great opportunity especially at a place like Wake Forest to achieve my dreams of becoming a professional soccer player. It makes me grind more and work hard, as well as appreciate the great opportunity that I have and make the most of it.

SW: With a sold-out crowd for the Duke game on Saturday the 29th, the crowds are very much in support of your team. How helpful is the crowd at Spry in encouraging the team?

OF: The fans are everything. We are so blessed to have the best fanbase in college soccer. The energy that they bring every game gives us more drive and motivation to give our best performance. We realize the love the sport and the team gets and we want to perform to please the fans and community. As an athlete, the fans bring you joy and it allows you to have more fun doing what you love. Going out and playing a big ACC game vs Duke on Saturday was an amazing feeling. The environment in the stadium was electric and it made the experience fun. For us to come out on top with a 4-2 was even better.

OF: My favorite moment here at Wake Forest must be when we won the ACC championship. To win a major title with my best friends was an outstanding feeling and against so many odds it was great to win. Another moment may have to be the ACC semifinals against Clemson. Spry stadium was packed and so many people were watching the game. There was so much on the line and I had the chance to score a goal. Celebrating with the hotline bling was so satisfying and it was a great moment for me.

SW: What is the greatest lesson soccer has taught you?

OF: Soccer has taught me a few great lessons that i will forever cherish. One is that you need to work hard to reach success. There is so much one needs to sacrifice if they want to achieve their dreams and I learned that through soccer. Giving up friends, social life, and sleep as well, it’s hard to manage everything but these actions must be done to come out on top. It takes hours of practice and working after hours as well when no one is watching [to be] successful. The game has also taught me to have fun in life. Never settle with something that just makes you money or makes other people proud. Not everyone believes in my dream but they don’t matter. I have been happy for 15 years playing the sport I love and until I don’t have fun anymore I will continue to play it. Soccer has been a blessing to me.