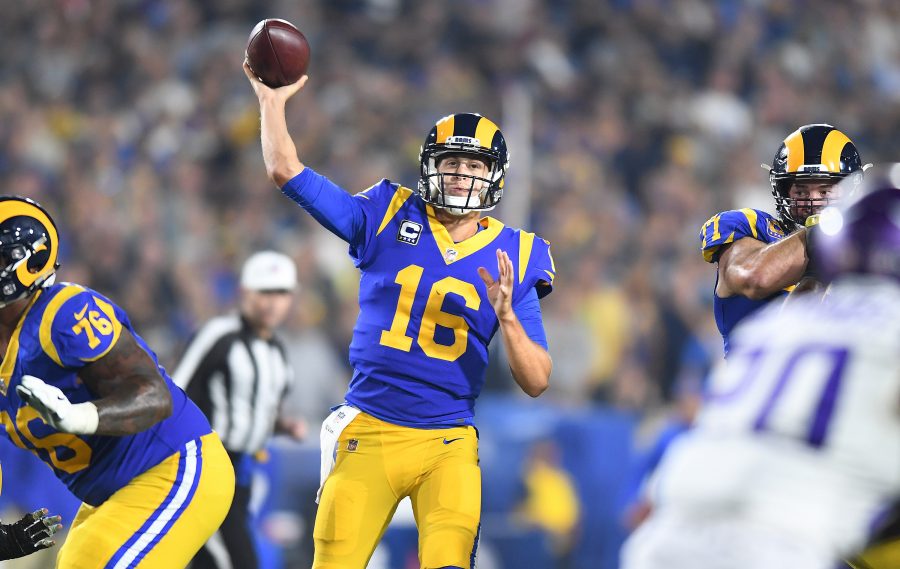 Los Angeles Rams quarterback Jared Goff (16) puts the ball in the air against the Minnesota Vikings in the third quarter at the Los Angeles Memorial Coliseum on Thursday, Sept. 27, 2018. The Rams won, 38-31, with Goff throwing for 465 yards and five touchdowns. (Wally Skalij/Los Angeles Times/TNS)

Through four weeks of NFL action, the league continues to deliver exciting matchups and results week in and week out. Some of the most exciting and surprising results included massive road wins for the Ravens and Bengals, overtime wins for the Titans, Texans and Raiders and much-needed bounce-back wins by the Patriots and Jaguars.

The Rams kept rolling on Thursday night en route to a 38-31 over the Vikings to improve to 4-0 on the year. Jared Goff continues to prove his doubters wrong as he manages Sean McVay’s offense masterfully with the help of Todd Gurley. Goff was an incredible 26-33 for 465 yards passing and five touchdowns against a Vikings defense that was supposed to be among the league’s best. The Rams had three different receivers (Cooper Kupp, Brandin Cooks and Robert Woods) who each had over 100 receiving yards and a touchdown. Through four weeks, the Rams are clearly the team to beat in the NFC and will continue to be as long as they keep steamrolling their opponents week after week.

Cincinnati continues to be a surprising contender in the AFC as they are off to a 3-1 start thanks to great offensive line play and quarterback Andy Dalton playing the best football of his career. This game in Atlanta was an absolute shootout that saw the Bengals come out on top 37-36 thanks to a last second touchdown pass by Dalton to AJ Green. The Falcons, meanwhile, appear to have one of the best offenses in football but injuries to star defensive players Keanu Neal, Deion Jones and Ricardo Allen have left them decimated on the other side of the ball and incapable of stopping anybody. With the Saints reeling, the Falcons have dug themselves into a deep hole at 1-3 in a tough NFC South, and without a healthy defense it’s tough to imagine them getting out of it and reaching the playoffs.

These two bitter AFC North rivals faced off in Pittsburgh Sunday night in one of the most intriguing matchups of the weekend. The Ravens came out firing in the first quarter, scoring a touchdown on their first drive and turning the Steelers over deep in their own territory on Pittsburgh’s first drive, leading to another touchdown to take a quick 14-0 lead. The Steelers, however, kept up their second quarter dominance by tying the game up at 14 going into the half, thanks in part to a fumble by Ravens running back Alex Collins on the Steelers goal line, which, had Collins scored, would have given the Ravens a 21-3 lead. The second half was a completely different story, as the Ravens dominated defensively. CJ Mosley and the Baltimore defense held Roethlisberger and company to just 47 yards of offense in the second half, and sealed the game with a late interception by Winston-Salem native Anthony Levine Sr. This complete game by the Ravens showed they are a force to be reckoned with in the AFC. On the flip side, this game showed that Pittsburgh’s offense may not be enough to make up for its abysmal defense.

The legend of Patrick Mahomes only continues to grow through four weeks as the Chiefs starter. Trailing 23-13 in the fourth quarter and facing the vaunted Denver pass rush on the road, Mahomes led two masterful drives that resulted in Kansas City touchdowns to give them a 27-23 victory over Denver and improve to 4-0. Mahomes was constantly under pressure from Von Miller and Bradley Chubb, yet he continually managed to evade the pass rush and find open receivers while scrambling out of the pocket.

The play of the game was a 3rd-and-five for the Chiefs down three points with about three minutes to play when Mahomes scrambled left to avoid Miller and threw a pass left-handed to Tyreek Hill to get a much-needed first down on their eventual game-winning drive.

Mahomes had an amazing 192 passing yards from outside the pocket on Monday night, the most by any quarterback in the past decade. At 4-0, the Chiefs surprisingly appear to be among the AFC’s best thanks to tons of talented skill players on offense, a sensational young quarterback and awesome play calling from Head Coach Andy Reid.