WFU Performs “Light Up The Sky” 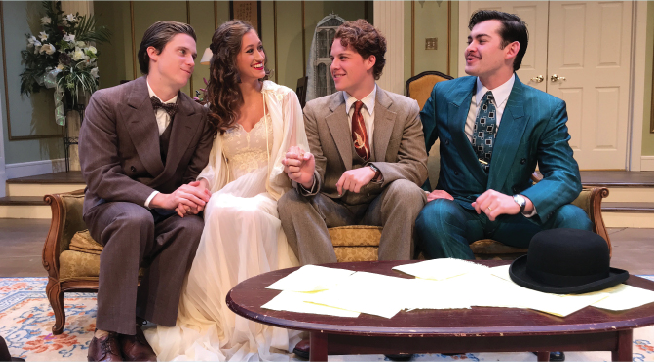 The Friday night performance of Moss Hart’s Light Up the Sky was one of the most engaging shows I have seen performed by Wake Forest students on the Tedford Mainstage. Through the set design and the physical presence of each actor, the audience was immersed in the challenges of the characters as they attempted to produce a play in the midst of the 1940s.

The introduction of senior Avery McClure as Carleton Fitzgerald set a high bar to which his fellow cast members proceeded to rise. His strong physical presence, moving throughout the entire set within his first few moments on stage, juxtaposed sophomore Cassidy Nobel’s Miss Lowell, who remained clearly in only one third of the stage and primarily at her desk.The confidence and grandiose manner McClure carried himself with drew the audience’s eye to him immediately and provided insight into the character of Fitzgerald and his primary concern for his own best interest.

Similarly, the appearance and physical presence of junior Katy Milian as Stella Livingston and sophomore Eliza Drake as Frances Black informed the audience that they too were primarily focused on their own self-interest. The peacocks decorating Milian’s skirt emphasized her over-exaggerated actions and vies for attention, despite only being the mother of the actor. Drake’s shiny silver dress and height drew the audience’s eye to her. Her exaggerated delivery of the lines and ability to cover ground on the stage implied that she too was seeking to be the center of attention and ensure her own goals were achieved. The women were willing to be ruled far more by emotion. The goal to draw their fellow cast member’s eyes towards them was believable and expected of the characters and actors, as each action grew far larger than the last and the audience was drawn further in.

Senior Caleb Cabiness truly brought the character of Sidney Black to life. The bright blue suit that Cabiness first appears in is the essence of a New Yorker businessman from the 1940’s with the shiny navy blue and the charisma to match it. The confidence and intensity with which Cabiness portrayed the character allowed the audience to perceive him as if he had truly walked out of the 1940’s and onto the stage. The physical demeanor of a businessman with fluid and strong motions without hesitation,stood apparent in contrast to McClure’s grandiose movements. Seeing such larger-than-life characters caused the eventual butting of heads to appear as a fireworks show, highlighting the many voices all vying for something within the production of a play.  It offered an insight into the behind-the-scenes of the professional theater world that many had never seen before.

Act two ended with the sound of the door shutting, a poignant decision by sound designer senior Anna Hibbert, providing a sense of finality to the end of the scene. Senior Jyles Rodgers, the lighting designer, then had the entire set illuminated by solely blue light for a notable period of time, extending the disappointment over Sloan giving up on his dreams and thus increasing the anger felt towards the remaining characters for the treatment of the play. The audience was led to believe this served as the end of the play while they sit there in silence, staring at the blue set, but without the feeling of closure one expects at the end of the play. The relief that the audience feels when the voices of the Shriners begin and Milian came out of the bedroom is palpable. However, the hesitation she has in opening the door provides a sharp juxtaposition from her earlier actions, demonstrating that something drastic has changed in the play. The audience is aware that the play could have ended before the start of the scene and is waiting on bated breath now to see how the remainder of the actions proceeds and if a conclusion can be reached.

Despite the cast being college students, and thus all within a small range of ages, senior Cole McWilliams’ performance as Owen Turner was easily able to portray the wisdom and experience of a far more experienced actor when compared to Crawford’s younger Peter Sloan. The tone of voice McWilliams utilized remained calm and controlled throughout the play, conveying the idea that he was a seasoned author who had been through this experience many a time and was no longer phased by it. His performance was truly able to overcome the limitations posed by the ages of the cast.

Because audience members today are not too familiar with the 1940’s, the comic relief provided from the mentions of Oklahoma! was far less effective than it would have when the play was written. However, it was senior Trey Sutton’s meek demeanor as Tyler Rayburn that informed the audience he would be the comic relief and thus carried many jokes to fruition. His attempts to force balloons through the door of the bedroom provided additional relief to help where Oklahoma! may have not fully relieved the tension as the large personalities of the characters clashed over the play.

To further set the play in today’s era, senior Anna Hibbert began the play with a clip of the song There’s No Business Like Show Business from Annie Get Your Gun so the audience would have a familiarity with it for the reference later in the play. Both Oklahoma! from 1944 and Annie Get Your Gun from 1946 would have been something the audience likely had a passing knowledge of when this play first opened in 1948, but now are much further removed from the common knowledge base.

Despite the disconnect, the company was able to successfully convey the intent and meaning of Light Up the Sky to their audience this past weekend. The ability of the actors to surpass both age differences with their characters and generational differences with the content made the play worth watching and an entertaining weekend night.