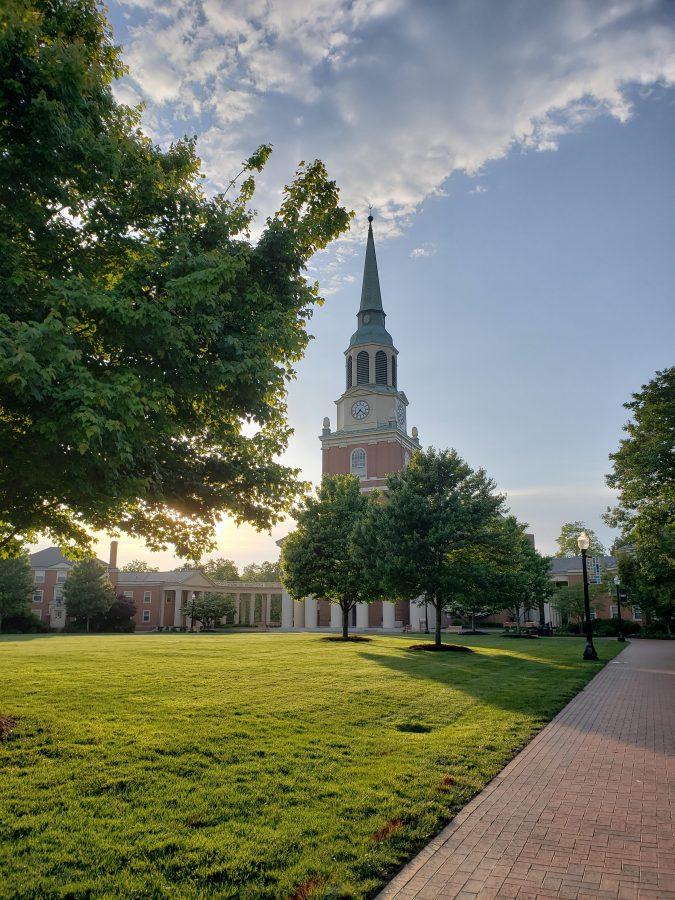 Have you noticed how Wait Chapel has been mysteriously enveloped in darkness lately?

The lack of light isn’t because Facilities and Campus Services is trying to get you spooked in time for Halloween.

Wake Forest is currently replacing the lights that shine on the Wait Chapel bell tower with LED lights. Due to this replacement, Wait Chapel has been unlit for the past two weeks and will be unlit for the next week. The new LED lights are going to replace the old metal halide light system that has been in place since 1981.

According to Brad Gwyn of Facilities and Campus Services, this change is because of both environmental and safety concerns.

The new LED lights will use approximately 60 percent less energy than the old lights, reducing both money spent and environmental impact. Additionally, the light colors can be changed with the press of a button, making the color-changing process less dangerous than in the past, when a maintenance technician had to climb to three different roof areas to place a colored film over each light.

With the new lights, Facilities and Campus Services will be able to easily schedule lighting and dim lights at will.

Furthermore, the new LED lights are half the physical size of the old lights. While the new lights will be set at the same brightness level as the old lights, they might look slightly brighter because of the difference in light from metal halide to LED.

This change is in keeping with a recent campus trend of replacing lights with LEDs.

According to the Office of Sustainability’s website, in 2017, the Lawrence Joel Veterans Memorial (LJVM) Coliseum basketball court switched to an LED lighting system which cut energy use by over 90 percent.

Like the lights on Wait Chapel, the LJVM lights are also advantageous in their ability to change color and create other visual effects easily. For example, the brightness setting of the lights can be easily adjusted.

Additionally, according to an Office of Sustainability article by Suzy Mullins, with recent installments of LED lights in buildings on the Reynolda campus, there are around 1,000 LED light fixtures around the Wake Forest main campus.

This switch to LEDs is part of a larger trend; Wait Chapel is not the only monument that uses LED lights.

According to the National Park Service, the Statue of Liberty and Mount Rushmore both changed their lights to LED in 2015.

LED lights are known for their energy efficiency and long lifespan in comparison to other types of lights.

The use of LED lights has been steadily increasing over the past years for both economic and environment reasons.

Now, in addition to reducing energy usage, Wait Chapel will shine in the glow of its new lights, with more possibilities for visuals due to new color and dimming functions.