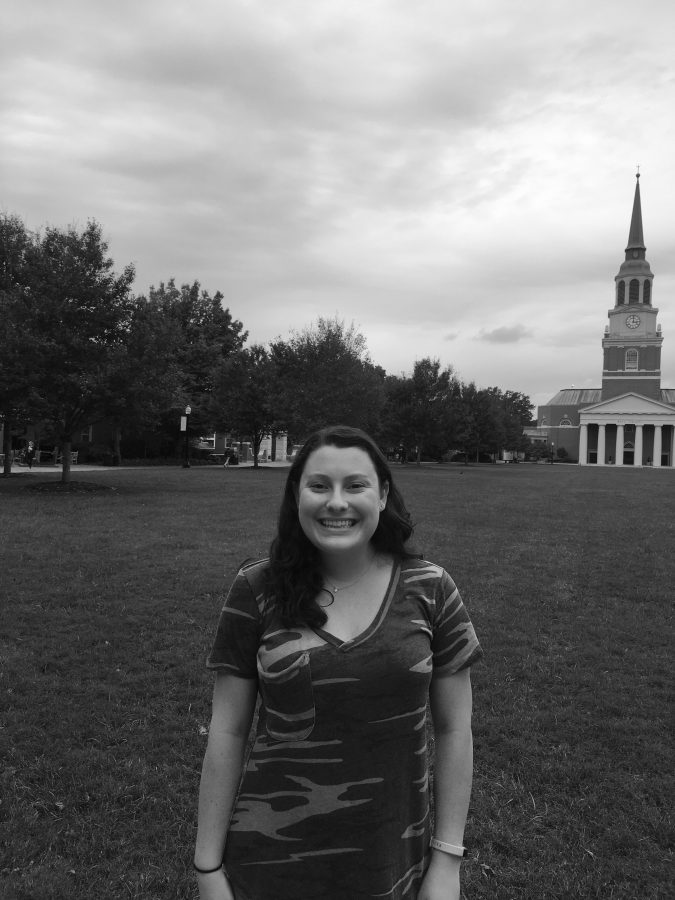 Many have had moments passing judgment on policies from afar, but when it comes to Diplomacy and Foreign Affairs, those policies can have grave consequences. Senior Rachel Schwam has spent the past few years interning and volunteering for the U.S. Department of State working to resolve these sorts of issues.

She currently serves as a liaison between Wake Forest and the U.S. Department of State to better inform the academic community about U.S. foreign policy priorities.

How did you become interested in this kind of work?

I actually did an internship at the Department of State in D.C. during the summer of 2017. I was in the Bureau of Western Hemisphere Affairs and within that bureau, I was in the Office of Public Diplomacy and Public Affairs. I was inspired to do this because of a very fascinating Foreign Service Officer called a “Diplomat-in-Residence,” who I’ve been working with and who does a large component of my job.

She’s given a region of the country and is in charge of outreach at different universities in that region specifically. I actually have not met her in person yet, but she’ll be coming to do an info session here and I’m very excited to meet her for the first time and be with her to answer people’s questions and give my personal experiences.

What aspect of your job is most interesting to you currently?

These Foreign Service Officers switch posts every two to three years, and one thing I found interesting working in this department is realizing that yes, people do move around a lot, whether it’s in D.C., in a different office or across the country, but the biggest thing is that no matter where they are, they are incredibly dedicated to something bigger than themselves. That is, they want to push out the message that the U.S. wants to promote mutual understanding abroad.

Even more inspiring is that they’re going to keep pursuing their job no matter what their own political beliefs are within the changing political climate. Some of them have been there for almost 30 years; that’s a lot of presidential administrations to go through! But they still keep going and doing what they know how to do best, which is being a diplomat.

What are some of the things you did as an intern?

One example of my work was communicating with embassies about trying to figure out how we could promote awareness of the Zika virus because in the Western Hemisphere, namely in the Caribbean and Central and South America, it was becoming a big issue and it still is. So, one thing that we were trying to do was work across bureaus and with these embassies and try to figure out what kind of programming we could do that would prove effective. Some places had less bandwidth than others, so they wanted to print flyers and hang them up. Other places wanted to have camps or conventions for journalists to make sure that they were knowledgeable when reporting about the Zika virus so that when people were reading it, they would be educated.

There’s also this amazing program called 100,000 Strong in the Americas that is run by someone in the office I worked in during summer 2017. It’s an educational exchange between the U.S. and countries in the Americas. People have to apply for grants to be able to do this and so that requires universities in different countries to collaborate and come up with these proposals. I was asked to be a part of this, so I got to read through grant proposals and evaluate them, and then I was able to be part of the final selection process and voice my opinions just like everyone else was. I thought that that was incredibly interesting. Being a part of it, I felt like I was genuinely respected, and my opinions were valued. That was a great experience.

When did you start feeling prepared to take on a job such as Campus Coordinator?

But after about a month I started showing them that I wanted to be working and I wanted to take initiative. So when it came time for my supervisors to start going to their next posts, I felt comfortable taking the lead on some of those projects and being able to say that I could handle it and I knew what I was doing. That was definitely a highlight of the internship.

What is something that you would like to implement at Wake Forest while working as the Campus Coordinator?

I think it would be very beneficial (and hopefully I can make this work) if one of the Foreign Service Officers that I worked with in the past could Skype in with us from wherever they are just to get their perspectives and experiences.

It would also be cool if we could get one of them who’s at an embassy currently to talk to us, so I’m working on that as well. In general, I think it’s important to let people know that this kind of work is not some very distant thing; it’s going on everywhere today.

Even in terms of working there are so many different options, so many bureaus, so many offices and there’s really something for everyone.

What did you do at Wake Forest that led you to pursue Foreign Affairs?

When I chose my major, I was pretty set on double majoring in Spanish and politics. I’ve just found that the language has come easily to me over the years. And it’s beautiful. It’s opened a lot of doors for me too, especially when I traveled to Spain and Costa Rica during and after high school.

Eventually, after a conversation with my politics professor, I concluded that I would major in Spanish and minor in politics. Before interning at the Department of State, I hadn’t really thought about public service, but after working there and having the experience of studying in Chile last fall, I saw how public diplomacy creates personal connections across cultures and is extremely powerful. It’s definitely something down the line that I might consider.

How would you connect your experience studying abroad to the work you do?

I would say that from going to do an internship at the Department of State into studying abroad, it was almost like I got to put my knowledge to work in a way. I got to do public diplomacy on an individual level.

When my host parents would say or do certain things that I wasn’t used to, I would just have to I took a step back to realize, you know, this is their way of life and I am in their home. Just being able to put a human face to each other’s countries and each other’s culture was very eye opening.

I think that if you have the chance to live abroad, study abroad, work abroad in any capacity, you can certainly educate yourself and prevent yourself from being ignorant and passing judgment without having full knowledge. When you’re working across cultures this is one of the most important lessons.

Working in diplomacy and foreign affairs with the Department of State not only do you represent your country, but you get to become a more global and educated citizen and I think we need more  people like that.