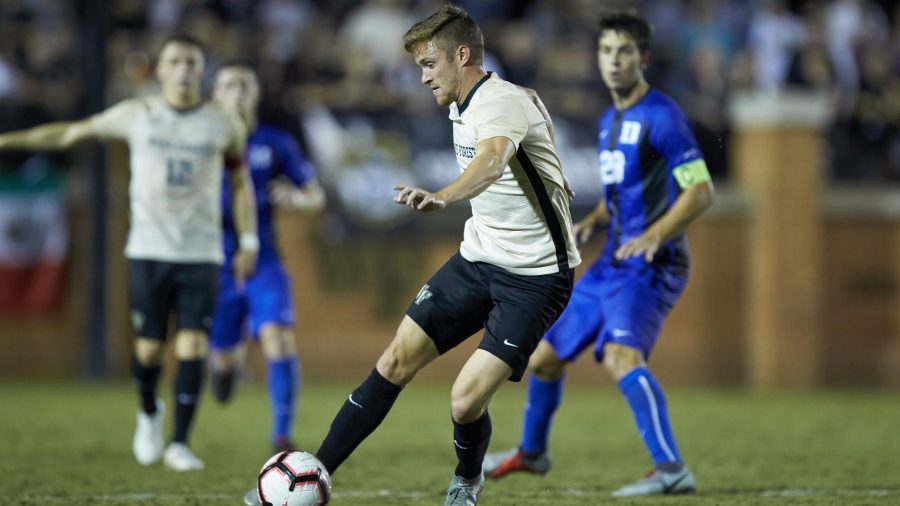 The Wake Forest men’s soccer team’s 11-game winning streak on the season came to an end at last against Syracuse.

That being said, the Demon Deacons began a new winning streak immediately afterwards, winning three games in seven days against High Point, Boston College and South Carolina. The team now has a record of 14-1.

After the Deacs made the trek to Syracuse, NY, the Orange scored two second-half goals on Oct. 5. This gave the Deacs a taste of what defeat feels like.

The Syracuse team changed their style of play to take on Wake Forest by putting heavy pressure on the Deacs all over the field, primarily in the midfield, for all 90 minutes.

“Syracuse did a good job disrupting the style of play that we are used to,” said Head Coach Bobby Muuss. “But I tell these guys all the time that it is a compliment when a team comes in and plays you differently than their last three or four opponents.”

The Deacs refused to let this loss shatter their momentum. Coach Muuss congratulated the team for keeping their streak for as long as they did, and immediately began preparing them for their next games.

To begin their new winning streak, Wake Forest took on High Point University at home and came away with a 4-2 win to get them back on track.

The match was tied 2-2 at half time and it was not until sophomore Machop Chol’s goal in the 64th minute that the Deacs really brought the fire, allowing them to immediately score another and maintain possession until the final whistle sounded.

Three days after their High Point win, Wake  Forest took on Boston College at home for another ACC matchup, and ended the game with a 2-1 win.

The game started off in a dramatic and thrilling manner when Wake Forest’s sophomore Bruno Lapa and Boston College’s Joshua Forbes both received red cards in the 30th minute, forcing each team to play with 10 men for the remaining 60 minutes.

Junior defender Michael DeShields stepped up after this moment and had a remarkable performance by not only scoring the first goal of the match off of a header before halftime, but by also blocking a goal late in the second half that would have tied the match.

Overall, Boston College outshot Wake Forest 18-7 and had an 8-4 corner kick edge. Sophomore Andreu Cases Mundet made four saves for the Deacs, while Antonio Chavez Borrelli made one save for the Eagles.

Wake Forest’s Alistair Johnston, a junior, scored the game-winning goal in the 75th minute off of a cross from freshman Aristotle Zarris that put the Deacs on top.

“I thought in the first half we responded well after the ejections,” Muuss said. “It was unfortunate for the game, but it was a physical game and I give Boston College a lot of credit. They imposed their will on our team tonight. We were against it more than we have been all year. The way that the guys persevered and responded with a goal we needed in the end was really great to see.”

The Deacs then moved on to shut out South Carolina on the road to get their third win in a row on Tuesday, Oct. 16. The final score of this Tuesday night game was 2-0.

Wake Forest only has two regular season games left against the University of Virginia on the road on Oct. 20, and against Louisville at home on Oct. 26.

The team is excited to continue this new winning streak, and take it with them into tournament play.