WFU Volleyball Comes Back Against Clemson 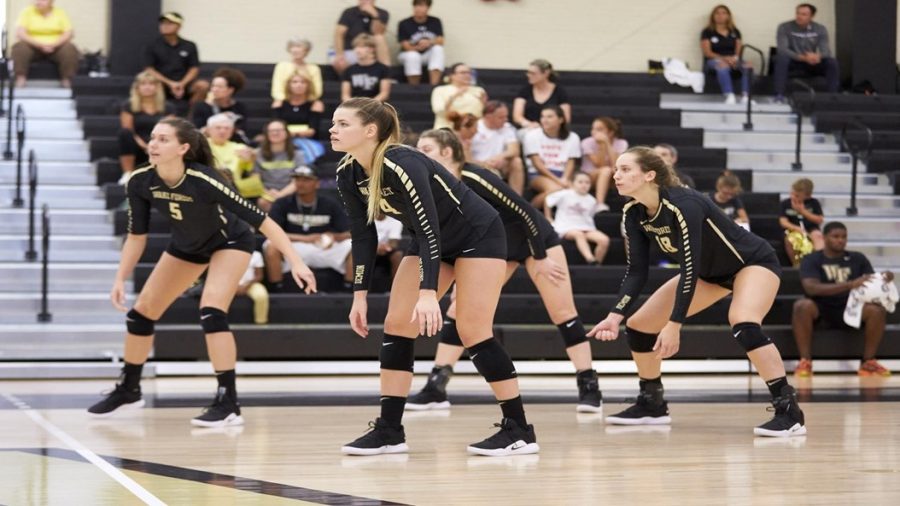 Coming off two losses against ACC opponents Notre Dame and Louisville, Wake Forest looked to right the ship against Georgia Tech 13-8 (2-6) on Friday and Clemson 10-11 (1-7) on Sunday.

Georgia Tech had lost six of its previous seven matches prior to its matchup against the Deacons. Wake Forest did the Jackets no favors in reversing their luck, taking a commanding 3-1 victory by a score of 25-21, 11-25, 25-23, 25-13. Wake Forest posted a hitting percentage of 23.9 for the match and the Jackets sat at an even 20 percent.

The first set featured a point for point matchup until a 6-0 run by the Deacons gave Wake Forest the upper hand with a 21-18 lead. The Deacons took the 1-0 lead in the match finishing the first set winning four of the last six points.

The Yellow Jackets rallied back to even the game at 1-1 as Georgia Tech held the Deacons to just four kills while Tech posted a match-high 14 kills in the frame. Wake Forest battled back in the third set to go back on top with a match-high 15 kills. With a 2-1 lead, the Deacons capped the match in commanding fashion, tallying 13 kills and just two miscues on 22 attempts for a 50 hitting percentage. Defensively, Wake held Tech to seven kills and a 4.9 hitting percentage.

Next came the Clemson Tigers, who had come into Sunday’s match riding high after a 3-0 domination of Duke, which came after a rough seven-game losing streak against ACC opposition. Wake Forest came from two sets down to win a stunner of a match 20-25, 15-25, 26-24, 25-21, 15-13. Wake finished with a hitting percentage of 24.8, with Clemson recording a 22.7 percentage.

Clemson took a 2-0 lead by scores of 25-20 and 25-15 before the Deacons made some key adjustments to turn the tides in the third set. Wake had 16 kills and played stellar defense to hold the Tigers to a 9.5 hitting percentage.

Both sides rallied back and forth in the third set, until the Deacons won five of six points to take an 18-15 lead. Clemson fought to even the frame at 24-24, but two straight kills sealed the 26-24 win as the Deacons cut the deficit to one. The Deacons kept the momentum going with a match high of 20 kills and a 54.3 hitting percentage in the fourth set. Each side went on early 3-0 runs, but Wake Forest earned the momentum back taking an 11-7 lead. The Deacons remained in front for the remainder of the set until 25-21 to set the scene for a thrilling fifth set.

The thrilling five-setter was capped by a 6-0 run by the Deacons in the middle of the frame to take a comfortable 10-6 lead. The Tigers clawed back to get within one, but senior middle blocker Katie Moore made her eighth kill of the game to seal the 3-2 comeback for the Deacons.

Of the adjustments made to set the stage for the dramatic comeback, Head Coach Bill Ferguson said. “We shifted the lineup which shifted our matchups. That’s what made the difference for us later in the match. We were able to get Katie Moore up to block Brooke Bailey who really affected us in the first two sets. The other thing was our passers were able to settle down a little bit. The first two sets got away from them a little bit. They were passing efficiently so we were able to start involving Caitlyn Della and Olivia Saunders again in the later sets, which really opens up our entire offense.”

The Deacons look to extend their streak of brilliant ACC play with two matches this week, first against Duke in Reynolds Gym at 6:30 p.m. on Wednesday before travelling to Blacksburg to take on Virginia Tech at 6:00 p.m. on Friday.

Coach Ferguson appears to enjoy such intense matches against worthy foes, explaining, “If you can’t get pumped up to play your rival, then you don’t have a pulse. You come to a school like Wake Forest to play these rivalry matches. We are all really excited for it.”