A Look At Wake Forest Football After The Bye Week 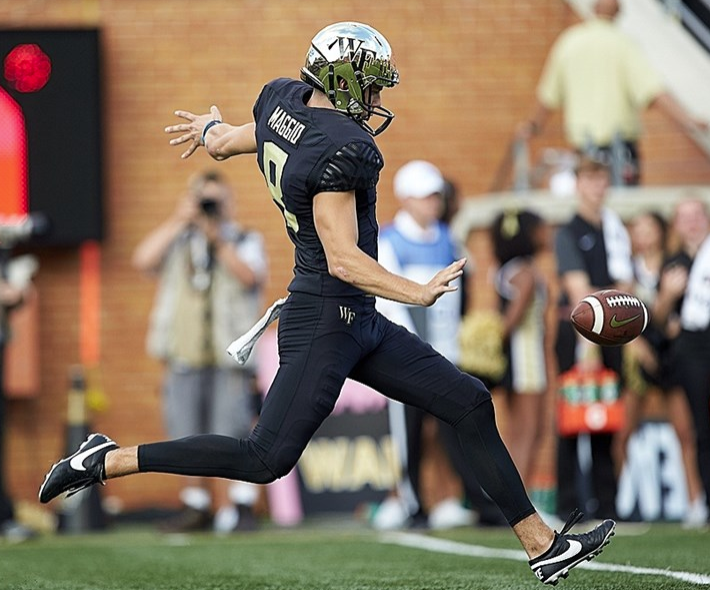 Wake Forest entered this season with big aspirations, and rightfully so. After all, the team was coming from back-to-back bowl wins and an offense in 2018 led by Belk Bowl MVP John Wolford that rewrote the school’s record book. Lots of people carried the belief that, despite losing Wolford and a lot of key pieces on defense, this team would be to able to get a bowl bid and perhaps even fight on the upper half of the ACC.

Even though a bowl bid is still very much on the table, the Deacs are at the bottom of the Atlantic Division and exhibited quite frankly embarrassing performances on defense against Boston College, Notre Dame and Clemson.

Thus far, the defense has allowed 36.8 points per game and against ACC opponents and Notre Dame, they have allowed a much worse mark of 53.3 points per contest. Against Notre Dame and Clemson we are talking about possible playoff teams, but this kind of defensive performance will not win you many games against any Power five time. Right now, the Deacs are ranked 122nd in total defense out of 129 FBS schools. It is worth nothing to be scoring 32.3 points per game if you are giving up almost five points on defense.

“[On defense practices during Bye Week], we had to return to the fundamentals, pad level, getting off of blocks, wrapping up and how we tackle,” said Head Coach Dave Clawson during Tuesday’s press conference. “Some of it is schematic, but some of it, if you look at the Clemson game, some guys are just out of control. Guys were flailing around and not playing with good body control and not tackling with the technique that we coach.”

The loss of key pieces like Jessie Bates III, Duke Ejiofor, and Jaboree Williams really hurt this defense and left them very thin at key positions like pass-rush, safety and linebacker. On top of that, some of their key defensive contributors have been battling injuries over the first half of the season like safeties Luke Masterson and Chuck Wade and linebacker DJ Taylor. They have also been lacking a vocal leader on the field that can ensure that the communication is running smoothly and all the players are lining up correctly.

On the bright side, there is still a lot of football left on the season and enough time for this defense to turn things around. It will be interesting to see how this defense will perform coming off a Bye Week against a struggling Florida State team. If they can clean up some of their alignments issues, the chance of a third consecutive bowl bid is very real.

On offense, the Deacs are going through the natural ups and downs of having a true freshman at QB. Let’s not forget we are only three or four months removed from when Sam Hartman was our third string QB and converted WR Kendall Hinton was the starter. A lot has changed since then, and Hartman has rightfully earned the starting spot for the remainder of the season. Some of his poor decision-making and bad throwing habits can be attributed to the transition to the college level. I do like the poise and composure when facing adversity that he has displayed this season. Hartman has a lot of playmakers at his disposal with WRs Greg Dortch, Scotty Washington, Alex Bachman and Sage Surratt, it is only a matter of being able to consistently find ways to put the ball on their hands and let them go to work.

Looking ahead to their next two matchups at Florida State and at Louisville, the Deacs will have their best chance to win on the road in the ACC this season. Both the Seminoles and the Cardinals have been underperforming in 2018 and it wouldn’t be a surprise to see Wake Forest winning those two games. However, it is not a stretch either to see the Deacs losing both games. This only shows how chaotic the lower half of the ACC is this year.

Against the Seminoles, the Deacs will have their first true test on the road this season, especially for Hartman. The freshman QB played really well on the road against Tulane during the season-opener, but playing in Tallahassee against a defense full of 4 and 5-star recruits is going to be a totally different animal. Wake Forest might also be without its best offensive players against the Noles as Greg Dortch rolled his left ankle during the Clemson game. Dortch was able to practice on a limited basis this week, but his availability for the Florida State will likely be a game-time decision. It’s needless to say how important Dortch is for the Deacs’ offense, especially this week facing a good Florida State defense on the road.

“It starts with their defense. They are in the top half of the conference in every major category: scoring defense, total defense, and rushing defense,” Clawson said. “Offensively, they are always very skilled. François is back for them and he is one of the rising stars in the conference. The running back combination of Akers and Patrick is probably as good of a 1-2 punch as any team in the conference.”

The Seminoles do have a plethora of talented players across the board. However, their biggest weakness this season has been the poor play by their offensive line. Opposing teams have been able to penetrate and disrupt the Noles’ backfield for most of the season. In 2018, the Noles’ offensive line has allowed 18 sacks through six games second-worst mark in the ACC. If the Deacs are able to dominate the trenches against Florida State and disrupt François’ rhythm, I like their chances.

“We haven’t played well on defense and going against their skill level, we are going to have to get lined up, keep things in front of us and do a great job tackling. Those are the things we didn’t do against Clemson,” Clawson said. “It is always challenging to go down to Tallahassee. We are looking forward to getting back out there and continuing the season. Hopefully, we can improve and find a way to get this one.”

The Demon Deacons will face the Seminoles on Oct. 20 at Doak Campbell Stadium. The game is set to kickoff at 3:30 p.m. and will be aired on ESPN 2.