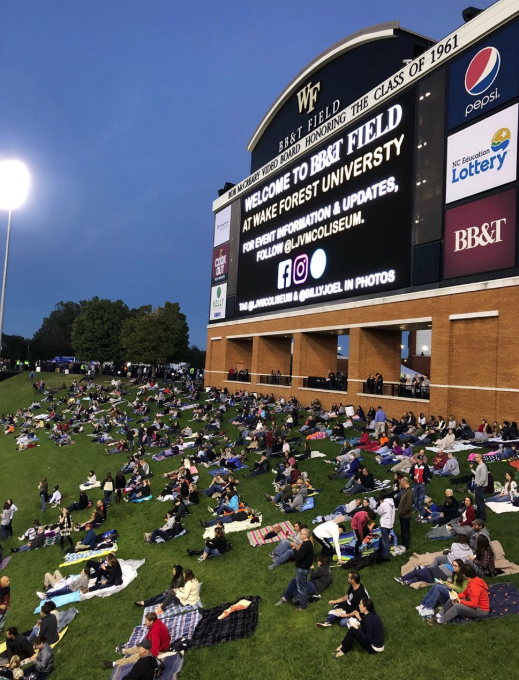 On Oct. 13, Billy Joel delivered a stunning performance of his iconic music for a stadium packed full of more than 30,000 devoted fans. BB&T Field was transformed from its usual Wake Forest football theme into a display of colorful lights and giant video screens showcasing Joel and his band, including the incredibly talented Mike Rivera on saxophone. Performing for his first stadium concert ever in North Carolina, the Piano Man thrilled his audience with a high-energy two-hour set that transported them back to the ‘70s and ‘80s.

He kicked off his show with a bang, performing “Big Shot” to the delight of the crowd, and proving that his voice has clearly not fallen into disrepair with age. Leading into “My Life” with Beethoven’s “Ode to Joy,” and beginning crowd favorite “Vienna” with a rendition of “The Lion Sleeps Tonight,” he seemed intent on incorporating songs outside of his own music. Die-hard fans recognized a few of the more obscure songs on his set list, including “Zanzibar” from his 1978 album “52nd Street” and “Keeping the Faith” from his “An Innocent Man” album.

Sophomore Catherine Heindel said, “It was so great to finally get to see one of the artists I’ve grown up listening to, live.” While performing “Sometimes A Fantasy,” Joel commented that producers had thought the song to be too risque for the radio when he released it, noting that ironically, “it certainly wouldn’t be considered too risque now.” Other fan favorites included “Only the Good Die Young” and “New York State of Mind.”

Throughout his concert, Joel appeared to be in a light-hearted mood, constantly cracking jokes about other performers in between songs. Referring to his “entertainer” throat spray that he used throughout the show, he joked, “Madonna uses this too. I don’t think it really works for her.” He also showed off his rotating baby grand piano, which he described to the audience’s amusement. “This is the extent of my special effects, but at least John doesn’t have it,” he said. “His piano just stays in one place.” He continued to make fun of “the other piano man,” as he called him after leading into “The Entertainer” with Elton John’s “Your Song.” After singing the lyric “ … don’t have much money,” he turned to look at the crowd in mock amazement. “You don’t have much money?” he said sarcastically, to which the crowd collectively laughed. In a more serious turn of events, he paid tribute to Aretha Franklin, for which backup vocalist Crystal Taliefero gave an outstanding performance of her iconic song “Respect.”

Performing in company with Joel during the concert was a variety of remarkably talented musicians. Mike Delguidice, on backup vocals and guitar, originally performed in a tribute band called Big Shot, until Joel himself discovered how astonishingly similar his voice was to his own and hired Delguidice to sing alongside him in his band. Giving an awe-inspiring rendition of “Nessun Dorma” which led into “Scenes from an Italian Restaurant,” Delguidice showcased his incredible vocal range and fascinated the audience with how much he sounded like Joel. Carl Fischer, on trumpet, trombone and saxophone, also concluded “Zanzibar” with an extraordinary trumpet solo that captivated the audience.

Although Joel is approaching his 70s, he still nailed each note as if he were still a young man performing in the ‘80s and kept up his string of one-liners and raunchy humor. He made multiple jokes about his age and appearance, playfully saying, “You guys are probably wondering… what happened to him?” and noting how he had recently turned 69 by lamenting, “I used to really like that number.”

Throughout his entire performance, the energy of the crowd never faltered, despite the fact that most of the attendees were over the age of 40, with a few exceptions of college students. His more upbeat songs had nearly every fan in the stadium on their feet dancing and cheering and his slower songs like the classic “Piano Man” had them singing at the top of their lungs.

According to sophomore Sarah DeHorn, the concert was “full of thriving parents, but their energy was contagious, and Billy Joel’s music is still timeless.”  During his four-song encore, he got up and danced around with his microphone stand while singing “It’s Still Rock and Roll to Me” and vigorously played electric guitar during “We Didn’t Start the Fire,” much to the audience’s enjoyment.

Overall, Joel gave an exceptional performance, as expected, and all the loyal fans who welcomed him were incredibly lucky to have experienced it.