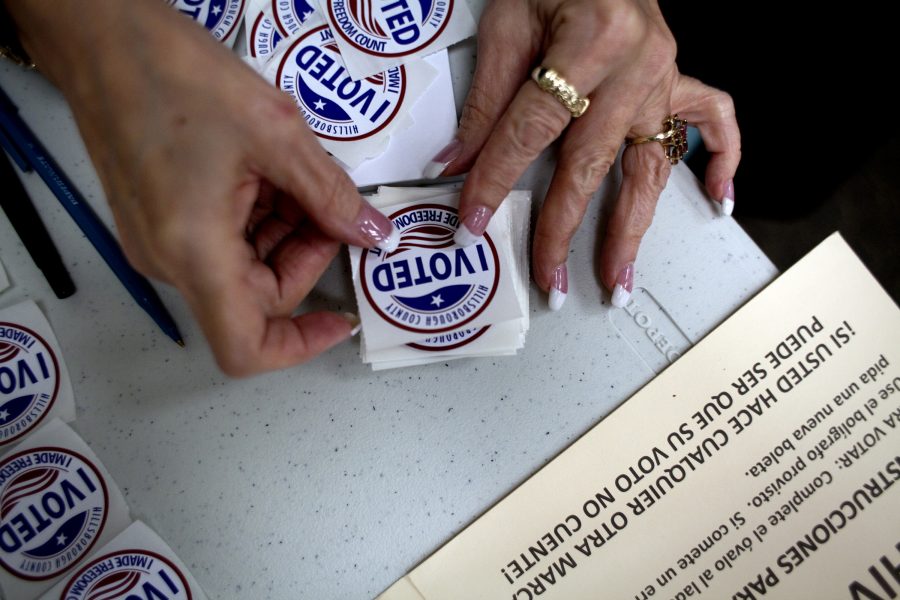 A poll worker gets "I Voted" stickers ready to hand to voters as they finished up at the ballot booths. (Carolina Hidalgo/Tampa Bay Times/TNS)

Midterm elections are quickly approaching and voter registration is coming to a close. In years past, that has meant that young people are neither registered nor interested in voting. To many, things seem different this time.

Millennials, specifically those aged 18 to 34, represent almost 50 percent of the voter population in the country and encompass all of the students here on campus.

When Taylor Swift, a pop sensation with over 112 million followers on Instagram, decided to use the app to express her political views and encourage people to vote, a response was inevitable.

“The more conversation there is surrounding the elections, the more likely people are to get informed and exercise their right,” said sophomore Addison Collins. “And Instagram, especially on a college campus, was definitely the right way, if not the only way to do it.”

Millennials make up almost 60 percent of Instagram’s total user population of one billion people, according to an analysis done by Statista in 2018 of the app’s age distribution, and spend 53 hours per week on social media.

On the other hand, the Pew Research Center found that on average only about 20 percent of millennial voters turn out for midterm elections. The 2014 midterm elections were historically low, with 21 million fewer people in the younger generation voting than adults.

This generation is the most diverse and  is quickly surpassing the Baby Boomers in size, so having the motivation to vote  will be necessary for milennials to influence the issues that will affect their lives in the future.

The elections represent the midway point of Donald Trump’s presidency and will reflect the country’s response to his policies.

Thirty- five out of the 100 Senate seats are up for election and Republicans also control the House, where the Democrats need 23 seats to change the majority. Women’s rights and equality are two key topics driving tension among voters, and specific issues like gun control and universal healthcare are subject to change.

Professor Michael Pisapia, an expert in political participation, said that although in the past young voters have been “less reliable,” the severity of the issues at stake should be enough to increase milennial voter turnout.

“Young voters are going to be more likely to turnout when the candidates explicitly target them,” Pisapia said.

Swift did exactly that.

Although reluctant in the past when it came to expressing her political opinion, Swift said that she felt that due to recent events in the past two years, now was the time. The New York Times reported that less than 48 hours after Swift’s post, 200,000 people registered between the ages of 18-34, which is right in Swift’s “wheelhouse.”

Twenty percent of advertisements feature a celebrity, according to Statista. When combined with politics, celebrities have started to become more outspoken, which could increase turnout.

Professor Katy Harriger, an expert in political participation among college- age voters, defined turnout as “a function of if people are paying attention.”

She said that there is a lot of positive potential for celebrities to bring people together, just like their music and talents do, and that can enable them to span the partisan divide to give their opinion and encourage others to as well.

An NBC News survey found that 55 percent of millennials said that they are going to vote in this year’s elections compared to 26 percent in 2014, and that their desired quality in a candidate is someone who can bring about change. Young voters want to make a difference, NBC reported, and are supporting candidates who will allow them to do so.

Using social media to demonstrate the impact of voting may just have been the platform that young people needed to mobilize and exercise their right, which usually goes unexercised in most elections, midterms, or otherwise.

Swift asked her followers to educate themselves on the candidates and to vote with who aligns with their values. She stressed that even if there is not a candidate who matches one’s views exactly, voting should not be avoided, especially in the midterm elections.

“We have the right and privilege to make our vote count,” Swift wrote on Instagram.