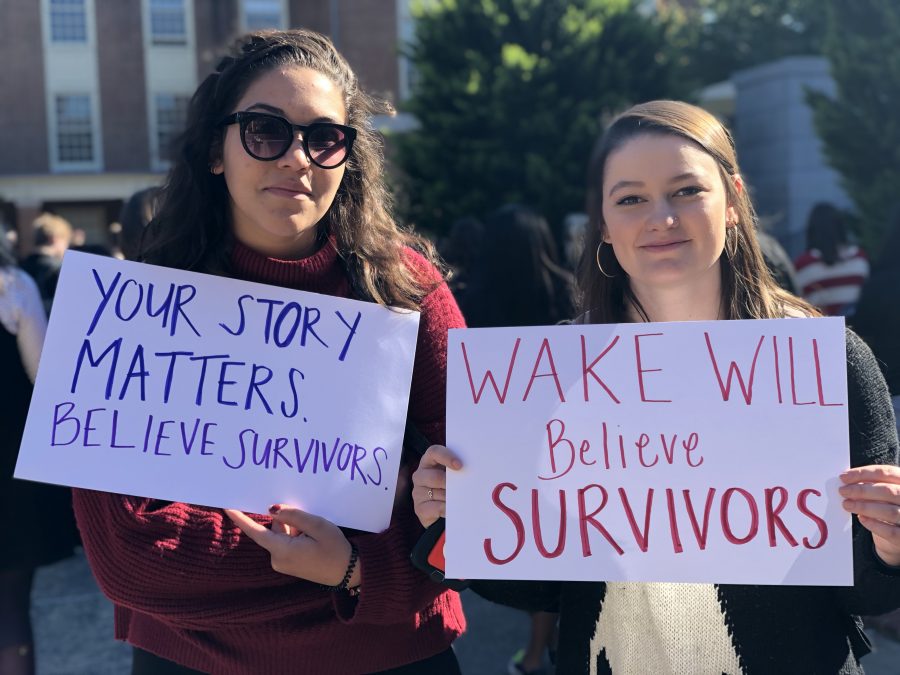 According to the National Sexual Violence Research Center, 20 to 25 percent of college women and 15 percent of college men are sexually assaulted during their college career. Mizzi hopes that the walk-out creates awareness and a sense of community and also sparks action.

“Believing survivors requires more than just words — it requires action,” Mizzi said in a petition she drafted with the help of friends.

At the beginning of the event, Mizzi invited people to sign the petition, which calls for eight institutional changes. Some of these changes include increasing funding for the Safe Office and University Counseling Center, expanding medical amnesty available to students and improving related first-year orientation events.

Mizzi hopes to build “a campus where we believe survivors and acknowledge their presence on campus.”

Safety was Mizzi’s biggest priority when picking where to attend college. Three years later, she sees Wake Forest as a campus fraught with microaggressions.

A large group of people attended the event in Benson-Tribble Courtyard, which lasted about an hour. People were invited to make supportive posters, sign the petition and share their stories with the crowd.

The first person to take the microphone led the chant, “When women’s rights are under attack, what do we do? Stand up, fight back!”

Several other people took the microphone to read poetry, tell of their experiences with sexual assault at Wake Forest and express gratitude for everyone in attendance.

Maggie Powell, a senior, said she felt like it was important to attend “to make visual the fact that people on campus care.”

Although there are many people on campus and in the community who care, some feel that Wake Forest could do more.

Sophomore Taylor Knupp expressed frustration with the campus, saying, “I feel like the Kavanaugh hearing and everything in Hollywood has basically been ignored in all of my classes.”

On the other hand, sophomore Sarah Graham said that these topics weren’t discussed in her classes either, but she’s not in classes in which they would be applicable to talk about.

However, Wake Forest’s Strategic Plan says becoming “a crossroads of discussion on the important national and international issues of our time” is a key part of their vision.

“Nationally, there is a trend of survivors speaking out about their experiences and advocating for change,” said Sarah Broadhurst, a Safe Officer Counselor and Advocate. “The Wake Forest community is affected by events happening outside the university just as much as the events happening on campus.”

Brett Kavanaugh, Harvey Weinstein and Larry Nassar are all public figures who are currently being discussed on Wake Forest’s campus. Many feel these issues are difficult to talk about, but without conversation, students fear that nothing will change.

Mizzi asks Wake Forest’s community to respect the stories of all people on campus, regardless of gender, sexual orientation, race or for any other reason. She’s not alone in this request. Mizzi described the experience as heartwarming and was impressed by how many people showed up.

Wake Forest offers numerous resources through the Safe Office, the University Counseling Center, the Title IX Office, and many other offices and organizations on campus. However, there’s a sense among Mizzi and several other students that the support could be stronger.

The organizers of the walkout said they hoped to increase awareness, support and action on campus. Broadhurst commended Mizzi and her friends for creating a space for survivors and allies to advocate for positive change.

“Having conversations is one of the most effective ways of helping people understand how many people have had this experience and how deeply impacted they are by it,” Broadhurst said. “With that being said, it can’t just be survivors having this conversation.”