Professor Speaks On The Importance Of The Amazon 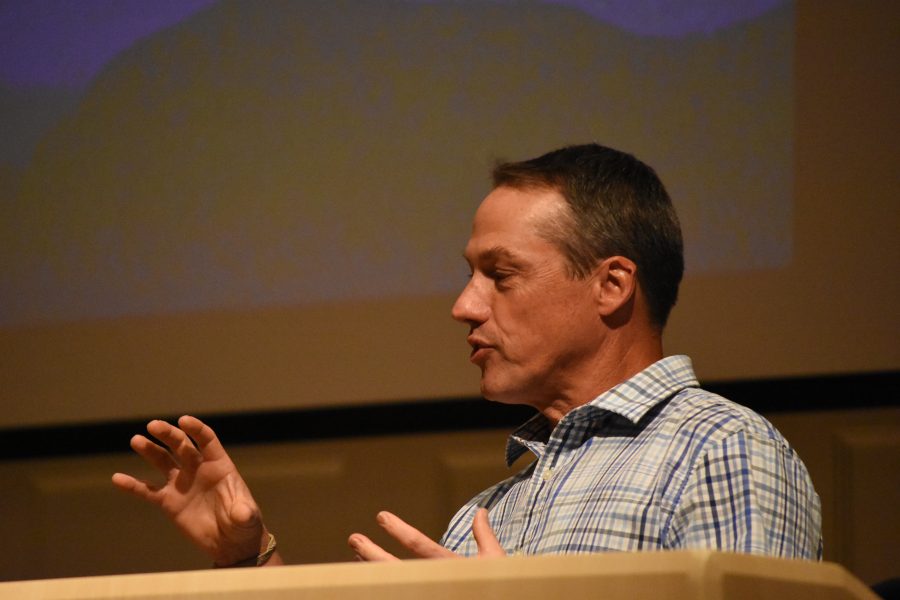 The Amazon basin is one of the wildest and most remote places left on Earth; not many people travel into its depths. Yet, Wake Forest biology professor Miles Silman has dedicated his life and his professional career to studying this area.

On Monday, Oct. 22, Silman presented some of his research and discussed its larger implications for climate change as a part of the Lifelong Learning annual lecture.

When Silman took the stage in front of a crowded audience in Porter B. Byrum Welcome Center, he promised to take the audience down to his research sites in South America. But first, Silman set those locations in context of the larger world.

“This is the Earth the way I want you to think about it — an incredibly dynamic place,” Silman said as he projected images of carbon dioxide cycles across the world.

Carbon levels in the atmosphere are rapidly increasing, which in turn has been affecting the Earth’s average surface temperature. It is widely accepted in many climate projections that the global average surface temperature must not exceed a two degree Celsius increase by the end of the century, as set by the 2016 Paris Agreement. An increase of more than two degrees Celsius could be potentially catastrophic.

“If my kids, who were born here in Winston-Salem, live here all their life, they will die in the climate of northern Florida,” Silman said.

Silman stressed that climate change is a pressing issue now for the global community. Moving away from the global perspective, Silman discussed the Amazon and the Andes.

The Amazon is an extremely biodiverse area: about one of every nine species of birds is found there and there are, according to Silman, “as many trees in the Amazon as there are stars in the Milky Way.”

It also plays an important functional role in helping to control the earth’s climate. The estimated 16,000 species of trees in the Amazon help to draw carbon out of the atmosphere. Further, the Amazon sends out mass amounts of water and energy into the global ecosystem.

As the climate warms, species must move up in elevation to stay within their thermal tolerance, but some might not adapt fast enough or the landscape the species are moving into might not be suited for the species. Silman sees this firsthand on a gradient along the Trocha Union, a ridge in the Andes that descends about 2,300 meters.

“Silman and his team have been establishing an unappreciated fact: tropical forests are fighting to adapt to steadily warming temperatures and that a number of species in these jungles are not adapting quickly enough to survive the warming temperatures coming in the years ahead,” said journalism professor Justin Catanoso, who reports on environmental issues and has traveled with Silman to his research sites in Peru.

But the Amazon is under its own threats in addition to climate change. Vast swaths of the Amazon are unprotected and subject to being negatively altered for agricultural or mining purposes. The patches of forest that are protected do not have the force to do everything that it needs to do, including keeping biodiversity levels high and mitigating the effects of carbon.

In addition to his role as the Andrew Sabin Family Foundation Professor of Conservation Biology, Silman also serves as the director for the Center for Energy, Environment, and Sustainability (CEES) and works closely with the Centro de Innovación Cientifíca Amazónica (CINCIA) to help preserve these areas.

The work that CINCIA is doing leaves Silman hopeful. Partnered with Wake Forest, they focus on restoration and remediation of the environment as well as studying the effects of mercury, a byproduct of gold mining prevalent in southeastern Peru.

Further, Silman noted that there is so much about the Amazon that is still unknown. Four to five thousand of the estimated 16,000 species of trees there are so rare they may never be found.

“We are still in the era of discovery on this planet,” Silman said.

Silman’s lecture, which appeared to captivate and educate the audience, ended by returning to the concept that the Amazon has a greater effect on the future of the global environment and humanity. “Forests are more than just trees,” read one of his last presentation slides.

“Most of us have no concept of the ecosystem services we depend on day-to-day that are provided to us in North America from the tropical forests of Central and Latin America,” Catanoso said. “Essentially, if we don’t understand how nature works and impacts our lives, we can’t take the steps necessary to protect and preserve it.”