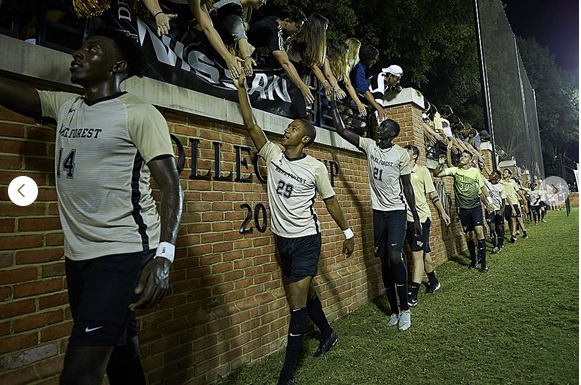 The Wake Forest Men’s Soccer Team clinched their fourth-straight ACC Atlantic Division crown after a thrilling 3-2 victory over No. 6 UVA on Saturday afternoon.

This action-packed game on the road was extremely back-and-forth for the entire 90 minutes of play, leaving all of the fans back in Winston-Salem unable to turn their eyes away from their television and computer screens.

“UVA is a great team and a team that doesn’t concede many goals,” said Head Coach Bobby Muuss. “I could not be more proud of the effort and resilience of this group today.”

The Deacs immediately jumped out to a 1-0 lead when sophomore Machop Chol scored in the 14th minute. This goal began with sophomore Omir Fernandez, who swiped the ball away from a UVA defender’s foot and fired a shot on the goal. Cavalier goalkeeper Colin Shutler was able to make an initial save; however, that was not enough. Chol was in the right place at the right time and was easily able to tap the ball right into the back of the net.

This was Chol’s fourth goal of the season and Fernandez’s fifth assist.

While Wake Forest fans thought this moment guaranteed a relaxed remainder of play for the Deacs, the Cavaliers refused to give up this easily on their home turf.

The first half ended 1-0 with both teams going into the locker rooms having no idea what they were about to be in for.

The second half was madness.

Four goals were scored in only 15 minutes, and everyone watching was on edge.

This madness began in the 63rd minute when Cavalier forward Irakoze Donasiyano scored the equalizer. Donasiyano fired a shot into the upper 90’s that junior Andreu Cases-Mundet could not reach.

Now, UVA was hungry. They scored another goal just 10 minutes later to take the lead. Klockner Stadium was roaring.

But the Deacs were not done fighting. Syracuse had given them a taste of what defeat felt like two weeks prior, and they were not going to let that happen again against Virginia.

Senior Logan Gdula put the Demon Deacons right back into the game in the 77th minute when he chipped the ball right over Shutler’s head and sent it soaring into the goal just under the crossbar. Not only did this play tie the game, but it provided the Deacs with the exact momentum they needed.

Players, fans and coaches alike thought that this match was guaranteed to be finished out in overtime. The 11 Demon Deacons on the field, however, now had other plans.

Sophomore Justin McMaster, just back from injury, netted the game-winning goal less than two minutes after Gdula’s. McMaster, on a mission, beat two UVA defenders and aimed his shot for the goal’s far post. Shutler was able to save this shot, but he was not able to hold onto it. McMaster followed the loose ball and was successfully able to sneak it right past Shutler on the rebound.

“To come back on the road in this conference — never mind against Virginia — is an incredible accomplishment,” said Muuss. “We have so much to get better at to reach our goals, but I am more than proud of these guys today.”

The Deacs will take on No. 10 Louisville on Friday night at home to conclude their regular season play. They are ready to continue the fun and the energy into the tournament play that follows.

They look forward to using this week of practice and their game against Louisville to keep getting better in order for them to reach the goals set in the beginning of the season.