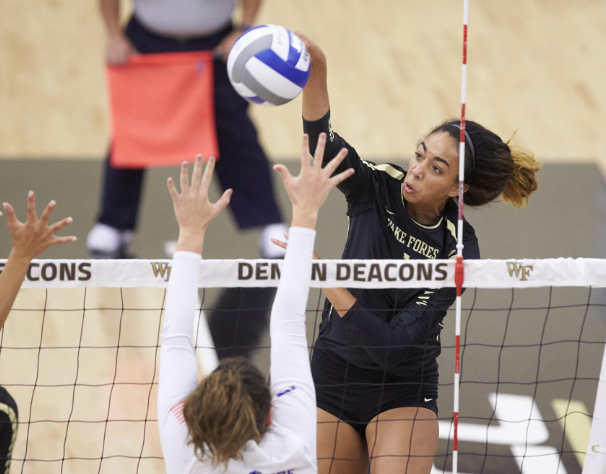 The Deacon offense started strong with a 42.3 hitting percentage off 14 kills in 26 attempts to take a 1-0 match lead. Despite a match-high 17-kill performance from Wake Forest in the second set, Duke battled its way to a 26-24 victory to knot the score at 1-1.

Wake Forest found its groove and pulled ahead in the third set, defeating the Blue Devils 25-20 behind four kills and a 50.0 hitting percentage from Mitchell. Duke took an early lead, but the Deacons strung together a 6-0 run to take a 7-2 advantage. Duke answered back with a few runs of its own, but back-to-back Blue Devil attack errors sealed the win for the Deacons in the second set.

Duke’s offense came to life in the fourth and fifth sets of the match with 20 kills while holding the Deacons to just 12 kills. The Blue Devils rallied again to tie the game at 2-2 with a 25-18 set four victory and kept the momentum rolling with a 47.1 hitting percentage in the final set of the match to clinch the five-set victory.

Wake Forest then travelled to Cassell Coliseum in Blacksburg to play a Virginia Tech team in desperate need of a win. The Hokies came in to play Friday night struggling mightily, having lost nine straight sets during a three-match losing streak against Clemson, Louisville and Notre Dame. In another grueling match, Virginia Tech pulled out a 25-21, 19-25, 25-23, 28-30, 15-9 victory.

Wake Forest was more efficient at the net with 52 kills on 161 attempts for a 14.9 hitting percentage and seven fewer errors than the Hokies. Virginia Tech posted an 11.6 hitting percentage. However, the Hokies were able to make timely plays to take the five-set victory.

Mitchell posted a team-high 17 kills for the Deacs, just one off her career-high of 18. Kuhn and Rassenfoss combined for 17 kills, while Holt recorded her third consecutive double-double with 11 digs and 39 assists. Senior outside hitter Jalia Tolbert and sophomore outside hitter Kaity Smith led the Hokies respectively with 16 and 14 kills and senior setter Rhegan Mitchell finished with 36 assists.

Both teams went back and forth in the first set, with Virginia Tech taking a 25-21 lead. Then, the Deacons fought to even the match at 1-1 with a 25-19 decision in the second frame. After posting 10 kills and a subpar 9.1 hitting percentage in the first set, Wake Forest recorded its best set of the match with 13 kills, only 3 errors, and a 38.5 attack percentage in the second set.

The Hokies jumped back in front with a narrow 25-23 win in the third set. The Deacons answered back with a 30-28 comeback win in the fourth to send the match to a winner-take-all fifth frame. In the fourth set, the Hokies went on several runs, but a late five-point run from the Deacons pulled Wake Forest within two. The Deacons took a 24-23 advantage following a few Hokie errors and a kill from Mitchell. Virginia Tech continued to answer back until a kill from Kuhn and an error from Virginia Tech clinched the fourth set win for the Deacons at 30-28.

Playing at home, where the Hokies are 7-3 compared to 3-4 on the road, proved beneficial for Virginia Tech as they rolled to a match-high 37.5 hitting percentage and held the Deacons to just four kills to take the final frame.

Up next, Wake Forest will return home on Friday to host the sixth-ranked Pittsburgh Panthers, who are a perfect 22-0 this year, at 5:30 p.m on ACC Network Extra. The Deacons will then welcome Virginia 6-14 (2-8) to town on Sunday at 1 p.m.