“Private Life” Locks You In An Intimate Experience 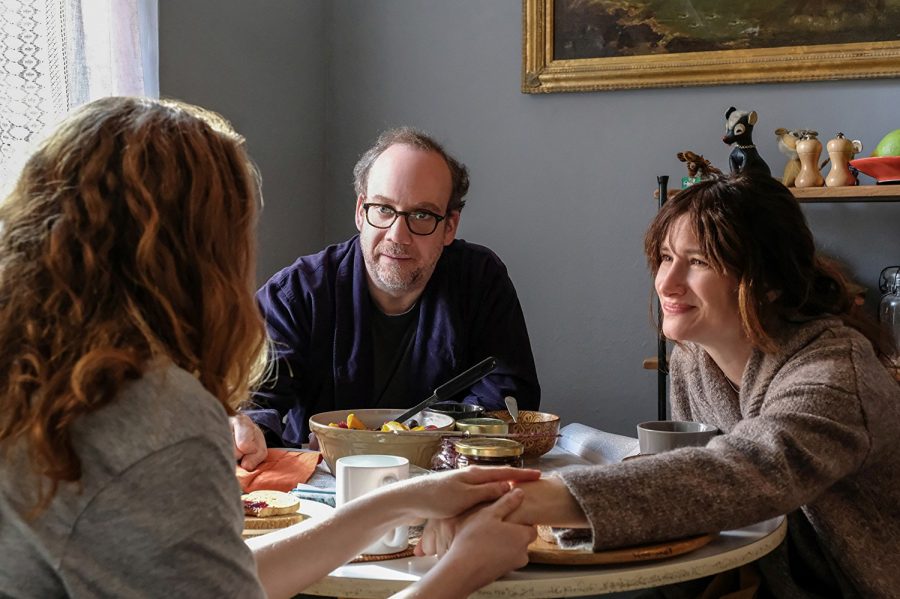 Rachel (Kathryn Hahn) and Richard (Paul Giamatti), the 40-something, art-urbanites at the center of Private Life, could have reached Sartre’s final waiting room. They find themselves squeezed and hunched in so many of them that their existence has been reduced, it seems, to waiting with hundred-yard stares. Simultaneously embarrassed, bored and exhausted by the fraying monotony of extra-sexual fertilization, the couple’s life-consuming project of in vitro fertilization (IVF) occurs mostly in the frustrating false starts of failed IVFs and adoption scams. And although this may be a not-so-unusual tale, we are absorbed so quickly into Richard and Rachel’s idiosyncratic despair that there is soon no other option but to lock in.

Soon, though, the couple is shown a glint of hope among their countless indignities, when their niece Sadie (Kayli Carter), drops out of college at Bard to try to live in New York City as an artist. Sadie comes to live with Richard and Rachel, whose fate now lies only, and squarely, in the use of an egg donor. The couple asks Sadie if she would consider donating, and she quickly consents, claiming Richard and Rachel as her “artistic parents” whom she likes better than her own. Carter plays Sadie with a combination of artistic zeal and sensitive despair and charmingly epitomizes the uncertainties of early adulthood through the young artist’s jaded, fragile psyche. Sadie consents to donating the egg partly because her mother (Molly Shannon) harps on her about finding purpose, and so what could be better, she thinks, than giving the gift of life to people she cares most about?

The ensuing process has its humorous parts, as when Richard administers Rachel and Sadie’s hormone shots and Sadie comments that the process is “so romantic, like we’re in Drugstore Cowboy.” These situational comments do the film a great deed, namely that of saving us from only moving through it in emotional fifth-gear. The humor provides respites to hang onto, at least for a second, and executes on a level that brings the deadly serious nature of Private Life back down to earth.

Private Life gains its intimacy through its setting, New York City, and the locale time and again proves itself to be a great place to capture the seasons. Woody Allen established a genre through the it, and in Private Life we get the witticisms of an Annie Hall, or even When Harry Met Sally. In these films, like in Private Life, the city’s built-in intellectualism (Richard and Rachel are both playwrights) is both pretentious and undeniably cable-knit. Not that it isn’t exclusive, but there is a beatnik-genuineness to it that gives it an approachable touch, almost like a cheat-code to intimacy. In Private Life, we get a similar conception of New York, but not only are the seasons themselves there, the people living in them seem equally as seasoned, and the film is suffused with a tawny, warm, yet never raging air of people’s gleams. It is a granular imagining, characterized by warmth and company, people and their personalities. Private Life makes Kramer vs. Kramer look over-the-top, and all other movies look hard and jaded, insecure and showy.

And although New York City contributes to the film’s likeability a great deal, the specific admiration and enjoyment stems from the fine acting of Kathryn Hahn and Paul Giamatti. In performances as densely situated and packed as their New York City loft, the two both define themselves as multi-faceted individuals and as a synergistic coupling. They stay, for the film’s entirety, in their livable, loveable glow.

There is not a climax, per se, in Private Life, only the bumbling revelations that go along with life itself. We end up right where we started, and we’re moved and touched. We’ve been shown life exactly as it is — with all its ups and downs, as if told beauty arrives in the mini-bloom of small moments, not in wallops of crisis or tragedy. The reward of Private Life is the intangible, almost novelistic feeling of intimate time spent with a character, a moving-through-the-life-of absorption that yields diverse feelings.

This jazz-like, lived-in pace and style allows both the humor and drama to mix, and the fruits of the minutia come to us through small lines and looks that seem to portend the crux of human experience. Private Life, like any intimate portrait, is a film of contextual riches, of life and relationships, tragedy and humor, living and love. It’s not only the cardigans and molded leather jackets that make you want to enmesh yourself in Richard and Rachel’s life, it is the impressionistic, improvisational glances and gestures that metamorphose into mussed-up beauty.

Early on, there is a scene that takes place as Richard and Rachel walk and talk in the city after being told that their only chance at conception is likely through a donor egg. It captures the vacillations of the intellect and the heart in a single instance, and a slowly unfolding, mobile conversation. The two have a tête-à-tête that both rages and simmers, joins and separates, like an unstable wave. “Man is a creature who cannot stand still under blows,” Saul Bellow said in Henderson the Rain King, but Giamatti and Hahn stand resolutely still in their desperate attempt to start a family. They seem to take the innumerable blows dealt to them and shudder with absorption. And while they deal these blows back out in tiny, potent doses of humor and loss, ultimately all is reinvested into their meaty performances. The two are so brilliantly battered, so genuine, that they erase the screen to simply look at you and shrug, and the beauty comes not when the two spin the darkness thrown at them to gold; they never do. It comes when they spin it into life.