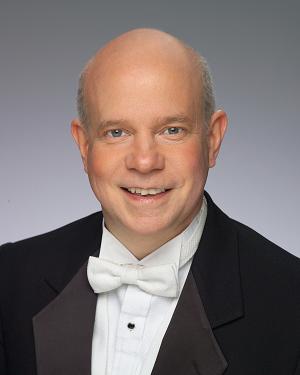 Professor and Orchestra Director David Hagy is the conductor of the annual midnight Halloween concert. Now in his 24th year, the concert experience has been described as “an epic enchantment” of a spectacle, filled with surprises and haunting, comedic music.

Hagy became passionate about music early in his childhood. He credits the public school system for opening him up to orchestral pieces and composers in his elementary school years.

He recalled memorizing a number of pieces every year as a part of the school’s requirement, and by the time he had reached eighth grade, he knew more than 100 pieces of symphonic music. In fifth grade, Hagy picked up his first instrument, the violin, after finding an old one in the back of his grandmother’s closet. Starting a year later than others his age, he was learning playing skills twice as fast as his peers in order to catch up musically with his own class.

Today, Hagy holds a B.M. in Violin Performance from Indiana University and a D.M.A in Orchestral Conducting from Yale University.

In fact, the Yale Symphony Orchestra is where the Halloween tradition began for Hagy. After accepting the position of Orchestra Director 24 years ago, he took the initiative of bringing the tradition to Wake Forest and has been the head conductor ever since.

Interestingly enough, the Halloween concert is an exciting mystery not only for the audience but for the performers and the conductor himself. Faculty keep students in the dark while they plot, and students prepare their own tricks on the faculty, all while performing haunting and triumphant music.

Hagy remembers a year in which the students staged his abduction and another year when they pretended to behead him.

The show becomes a back-and-forth of unexpected tricks and treats for the auditorium to enjoy, and this year should be even better than the last.

Every year, they are challenged to find themes that outdo prior shows, yet Hagy never fails to get the job done.

“If you had spoken to me on Friday, I would not have known what to tell you, the plot hadn’t been created,” Hagy said.

It’s a multi-day process, but the outcome is spectacular. Hagy weaves all sorts of popular stories and fairytales into a hilarious storyline with creative and frightening events.

When asked what his favorite candy was, Hagy replied, “I’ve always hated candy!” He remembers stashes of decade-old candy in his house just sitting and collecting dust after every Halloween. Why go trick-or-treating then? Well, for the costumes, of course!

In addition to the traditional music and mystery plot at the midnight concert, the performance would not be the same without the costumes. With his students, Hagy gets creative on stage with concert attire, playing such characters as Captain Picard, Hannibal Lecter, the Wicked Witch, Bugs Bunny and Olaf.

Dr. Hagy remembers being so unbearably heated inside the Olaf suit, he had to turn on a small fan, making it difficult to hear the orchestra. Another year, he dressed as Voldemort on the back and Gollum on the front for a Star Wars vs. Lord of the Rings themed concert.

“When I faced the audience, I heard all sorts of reactions,” he said. “Here was a 56-year-old man dressed as Gollum in the front, shirtless, with a diaper on. It was quite something.”

He also recalls playing Darth Vader and taking off his costume midway through the concert to reveal himself as Leia, equipped with both buns and the full outfit.

With his enthusiasm, passion and creative mind, Hagy has been inspiring students to love music in a way they never had before.

He encourages the Wake Forest community not to only associate orchestral music with a group of instruments playing long symphonies, but to see this music in collaboration with humor, creativity and excitement.