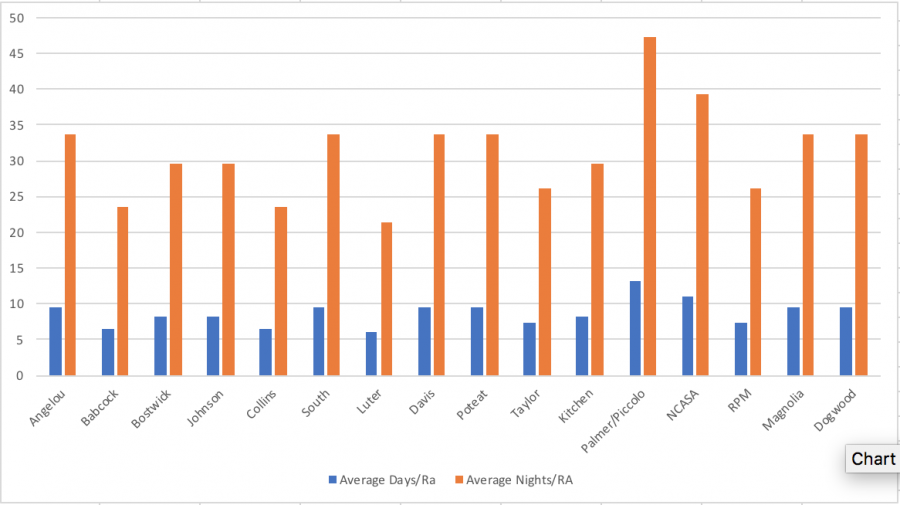 For many, this unofficial motto among student resident advisers, or RAs, has become more relatable than ever in recent months. After working to support a campus community directly impacted by a string of several tragic events in the spring semester, many RAs returned to campus expressing symptoms of emotional fatigue and burnout. Thus, when it was revealed in August that expectations and hours had increased for the position, it created conflict between returning RAs and the Residence Life and Housing (RLH) Office and highlighted disparities between how much RAs are expected to work based on where they are placed.

While RAs are responsible for many things in their respective residential communities, their primary role is to “assist their residents in times of crisis/need and [at] all other times,” according to Dr. Stephanie Carter, the director of Residence Life. This role, when coupled with other aspects such as logging long duty hours and planning community-building events, can be difficult to balance with outside commitments. Because RAs are expected to prioritize their job above other extracurriculars and be an available resource for residents, it plays into their unofficial motto that being an RA “is a tattoo, not a T-shirt.”

“On the most basic level, the saying [‘it’s a tattoo not a t-shirt’] means being an RA is not something you can take off,” Carter said of the slogan. “The job is not like a t-shirt, it’s more like a tattoo that you wear as long as you are employed with our department.”

According to their contract, RAs should expect to work an average of 24.45 hours per week over the course of the semester; they are prohibited from exceeding an average of 29 hours per week. When counting hours worked, this includes time spent in community development, in training and on duty.

At the beginning of every semester, RAs attend lengthy training sessions. In addition, RAs must complete a two-credit-hour College Student Development course. They learn “student development theory, coping with behavior problems, crisis management, mediating conflict and other issues,” according to the course description.

Despite all of the preparation that RAs go through to do their jobs, Dr. Emily Palmieri of the University Counseling Center pointed out that “Resident Advisers are not meant to be caregivers assuming full responsibility of their residents to the degree a licensed helping professional would hold responsibility (and training).” However, the events of last semester, which included a shooting on campus, a racial slur incident on a freshman hall and a student passing away in her dorm room, meant that many RAs were put in difficult positions that their training did not entirely cover.

As a result, when returning to campus in August for fall RA training, the culture of burnout among returning RAs became evident in a training session titled “Filling your own bucket: supporting yourself as you support students,” led by Palmieri and Dr. Jillian Neill, another counselor with the University Counseling Center.

“The trauma our community faced [this past year] was certainly evident in [students’] rooms, lounges and other common spaces, and resident advisers were at the front line,” Palmieri said. “Residence Life and Housing Staff — including administrators, graduate hall directors, and resident advisers — were forced into extremely difficult situations in which they often had to temporarily put aside their own personal reactions in order to be there for others who may have lost a close friend or personally felt in danger. Understandably, much of the campus was in need of empathy and grieving to allow the healing process to occur.”

While the symptoms of compassion fatigue and burnout are usually associated with jobs such as being a full-time caretaker or nurse, many RAs attributed their symptoms to aspects of the job and cited that their own support network, the RLH Office, was lacking in providing RAs with the support necessary for them to effectively be resources for their residents.

“We need to have more honest conversations about mental health issues that people are going through, including RAs,” said senior Matt Schlosser, who has been an RA since Fall of 2016. “RAs are always looked at as people to lean on, but we’ve been going through a lot of issues internally and we have labor issues as well.”

During fall training earlier this semester, the day after the session with the Counseling Center, it was revealed to all RAs that they would be expected to implement day duty on weekends this semester, meaning that each staff community would be expected to work two additional shifts of 8.5-hour day duty on Saturdays and Sundays without additional pay. The additional 17 hours of duty each week adversely affects those in smaller living communities, and has caused others to implement “power weekends” during which an RA may work as many as 72 hours straight in a given weekend. A staff community consists of a group of buildings whose RAs work together to cover tasks, such as the Palmer-Piccolo community or North Campus Apartments/Student Apartments (NCASA) community.

When asked for the reasoning behind adding weekend day duty, RAs were told that the change was made in efforts to ease the workload of Graduate Hall Directors (GHDs), who oversee RA staff communities and who are expected to be on duty for one week per semester for the entire campus.

The implementation of weekend day duty came as a shock to many returning RAs, who in April had signed the same contract as in previous years, pledging to work weekend duty “as scheduled.” Following the announcement of the change, several RAs scheduled meetings with RLH administration, but after several months of back-and-forth conversations, minimal changes were made. This affected the line of trust and support between RAs and RLH, making many RAs feel further isolated.

“It’s really hard to do a campus job when your job is to make people feel supported and heard, and you don’t feel like you’re given that same level of respect from people at the top,” said an RA who chose to remain anonymous.

“Change in any organization can be challenging and we believe in ensuring a culture of openness and dialogue is key to navigating it together,” Carter said of the changes.

The implementation of weekend day duty has adversely affected students on smaller staffs, who already stretch to provide residents with the same attention as larger staffs. Between Palmer and Piccolo, there are five RAs, and so an additional 17 hours of duty per weekend means, on average, six additional hours per RA per week. For larger staffs such as for Luter, which has 11 RAs, the change is minimal in comparison.

After RAs tried to argue that the implementation of weekend day duty may put members of their staff over the 29-hour maximum average stipulated in contracts, they were met with a response effectively stating that duty hours were counted differently since RAs may eat, sleep and socialize while on day duty. RLH asked RAs to log their hours throughout the semester to effectively prove that they were working more than allowed; however, many expressed frustration at having to laboriously prove their point.

While on duty, RAs carry a specified duty phone with them at all times and cannot be further than 10 minutes from their living community. This structure is similar to the “on call” nature of a student EMT shift. However, unlike the RLH office, student EMTs infrequently work shifts longer than nine hours, and while they work on a volunteer basis rather than the RA stipend structure, all hours during which they are on call are logged for training and experience purposes.

For some, being on duty is a significant stressor when shifts are markedly long.

“You can’t focus on school work or anything when you’re on duty because you’re always making sure no one called you with a crisis,” stated an RA who chose to remain anonymous. “The duty phone makes you feel like you have to check it all the time.”

One of the minor changes which RLH has implemented as a result of conversations with students has included the stipulation that, while an RA is on day duty over the weekend, they may sometimes put the duty phone on “Do Not Disturb,” meaning that any call will then default to the GHD  or another RA on duty. However, most feel that this change does little in the grand scheme of things, as they may still need to respond to calls from the GHD.

In addition to affecting RAs on smaller staffs, the change also highlights the fact that the option to quit the job is more available to those with the finances to pay for housing than to those who depend on the RA stipend to afford a semester living at Wake Forest.

“Even though it sucks, a lot of people need this job and don’t have a choice,” an anonymous RA stated. “If it was not a matter of paying for school, a lot of people would have quit by now.”

As the semester has continued, RAs have continued to meet with and converse with members of RLH administration, and while they do not feel as if RLH is intentionally ignoring them, many have given up in the fight to reverse the change to day duty on weekends.

“I think burnout is always going to exist in this job, just because of the nature of the work,” Schlosser said. “It’s tough work supporting people, so that’s why it’s so important to have a strong team and good support structures available for people. “Here, RAs didn’t trust the support structures that were available to us, and that has been difficult, but it will just take time.