House Flip May Be Best Hope For Midterms 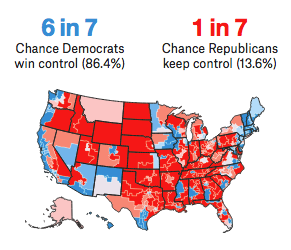 As our country clears the decks for the midterm elections next week, I have one humble request for my fellow Democrats: Please do not confuse likelihood with certainty.

If you have kept the FiveThirtyEight website open on your browser and refreshed it constantly for updates to its election forecast (guilty!), then you know that the numbers have consistently favored the left. The site predicts that Democrats have an 86 percent chance of winning control of the House of Representatives, while David Wasserman of the Cook Political Report puts the odds around 75 percent and The Economist’s data analysis reports 71 percent.

Most people, upon seeing these percentages, would probably think, “Looks like the Democrats are going to win.” But don’t fool yourself. The probability that the Republicans retain control of the House of Representatives is estimated to be between 15 and 30 percent, and events with similar likelihoods happen all the time — think surprise snowstorms, “outside smokes” in sports games and the election of Donald Trump. While it is not the most likely outcome, continued Republican control of the House of Representatives remains a possibility that must be reckoned with — especially considering the fact that the odds markedly favor continued Republican control of the Senate.

What are the plausible consequences if Republicans sweep the midterm elections and retain control of both chambers of the Congress? It would be validation for Trump, who could argue that he had defied the experts and the “liberal media” once again; he could brag that he had outperformed Harry Truman, Lyndon B. Johnson, Ronald Reagan, Bill Clinton and Barack Obama, all of whom suffered heavy midterm losses in their first term in office. It would lead him to believe that he has a mandate to push even harder for the America that he wants — one where corporate profits take precedence over our violently warming planet, voting rights are surgically abridged, the independence of the judiciary is openly scorned and the truth is whatever he says it is. The Republican caucus, which has already proved shocking in its cowardice and fecklessness, will be even less inclined to challenge him.

An 86 percent chance is not just a careful way of saying a 100 percent chance. All it would take for the Republicans to swing the election would be if right-leaning voters put aside their disappointment with Trump and support GOP candidates or if Democratic voters — particularly young people — turn out in low numbers, as they often do in off-year elections. We must assume that Republican-orchestrated efforts to suppress turnout could also work in their favor in swing districts, irrespective of what public opinion polls may indicate.

However, at this point, there’s a significant likelihood that we will wake up on Nov. 7 to an incoming Congress whose chambers are dominated by opposing parties — in other words, a Democratic-controlled House of Representatives and a Republican-controlled Senate. (In the Senate, Democrats must defend nearly half of their caucus to avoid losses, while Republicans must only defend about a fifth of their caucus. Democrats would be lucky to maintain the current 51-49 split in that chamber, especially given the conservatism of the states with Democratic senators up for reelection.)

A split decision in the midterms may appear to be a grim best-case scenario, especially considering the limited power of the House of Representatives in a bicameral system, but the checks that a Democratic lower chamber could place on the presidency should be sufficient motivation to get us all out of bed and to the polls on Election Day. If Democrats win a majority, Rep. Maxine Waters (D-CA), the current Ranking Member of the House Committee on Financial Services, would become Chair, and she would have the power to subpoena Trump’s tax records; general subpoena power would allow Democrats more vigorous scrutiny of corruption in the White House. Given the fact that the Republican-controlled House is far more inclined than the Senate to allow Trump a free hand should he seek to make the presidency more closely resemble his Twitter feed, a swing left could make a good deal of headway in restraining an untrammeled, triumphant Trump.

The Democrats will have much more favorable odds of retaking the Senate in two years — especially if they can ride the coattails of a popular (and yet undiscovered) candidate for president. In the meantime, I am crossing my fingers that come Election Day, a much bluer House of Representatives will brighten our skies. And yet, in the aftermath of 2016, may we know far better than to let Nate Silver lead us down the primrose path.