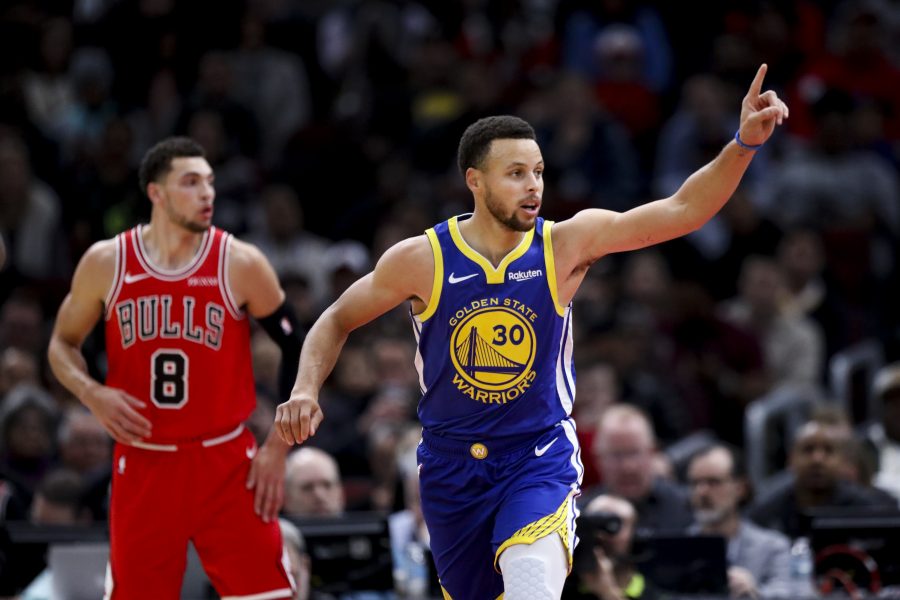 Golden State Warriors guard Stephen Curry (30) puts his finger up after making a shot during the first half against the Chicago Bulls at the United Center Monday Oct. 29, 2018, in Chicago. (Armando L. Sanchez/Chicago Tribune/TNS)

By the start of week three in the new NBA season, there has already been a couple of 50 points and several 40 points performances in a single game. There are some old faces among these players who are always considered as solid scorers, but there are also some new faces.

Curry might surprise you the least on this list with his unprecedented three-point ability, but the two-time MVP did it again. He dropped 51 points with 11 three-pointers in only three quarters against the Washington Wizards last Wednesday.

Fifty-one points was the league scoring record so far in this season, and 11 three-points made were just two baskets away from the league all-time three-point record, which was set by Curry himself two seasons ago. Fifty one points were also only three points away from Curry’s career high score.

Curry was on fire in the first quarter against the Wizards, scoring 23 points with eight shots out of 11 attempts, including five three-pointers. It was hard for a player to score 20 plus points in a single quarter, but Curry did it twice in one game as he scored another 20 points in the third quarter.

In the seven games Curry played this season, he scores at least 30 points and made at least five three-pointers every game except scoring “only” 29 points in two games. If the captain of the defending champion team keeps this momentum going, the Warriors will likely bring back the Larry O’Brien Championship Trophy.

When J.J. Redick made the three-pointer plus a foul with only few seconds remaining in the overtime, everyone thought the 76ers was going to win. But Griffin had a different thought.

He did a ball fake at the perimeter and then drove into the paint, finishing a layup with an extra foul. The game tied by 132 with less than a second remaining. Griffin then made the free throw, got the fiftieth point in the game and led the team to the victory.

Being a player of the Pistons for the second season, Griffin proved that he had recovered from previous injuries and aging was not a big deal. 50 points was his career-high, and nothing was more exciting than reaching a career-high with a game-winning shot.

Fifty points also showed the transformation of Griffin, as he relied less on scoring inside and developed a decent middle range shot and three-pointers. Former dunk contest champion, Griffin made a career high five three-pointers in this game.

The Trail Blazers were playing against Orlando Magic away from home last Wednesday, and a Magic fan “trash talked” Lillard’s performance of getting only seven points in the first half.

Lillard did not say much, but he bounced back in the second half with 34 points, making 11 shots out of 15 attempts and leading the team to the away win.

Two days later, in the game against Miami Heat, Lillard was still in his zone. Despite the loss, Lillard did whatever he could – he scored 42 points, seven rebounds and six assists, and 25 points came from the second half.