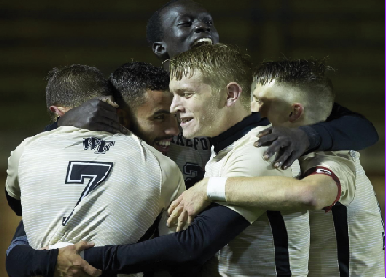 The top-ranked Wake Forest men’s soccer team ended their regular season on a high note by coming back from behind to beat No.17 Louisville 2-1 in overtime at home.

The Deacs and fans together honored the program’s four seniors before the match: Brad Dunwell, Sam Raben, Logan Gdula and Tre Bailey. This was their 71st win with this team.

Both Dunwell and Raben have started every match since they stepped foot on campus freshman year.

“You’ve got to pinch yourself to realize that this doesn’t happen in this conference or in this country very often,” said Head Coach Bobby Muuss to describe the substantial number of wins experienced by these players.

The Deacs ended regular season play 15-1, and therefore secured the top seed in the upcoming ACC tournament. This spot allows them to have a bye for the first round, which gives the team some extra time to practice, watch film, recover and prepare.

Although Wake Forest lost to Syracuse three weeks ago on the road, they finished up unbeatable at Spry Stadium, winning 11 games and losing none.

On Nov. 4, the Deacs will begin tournament play, facing off against the winner of the NC State and Boston College game on Oct. 31.

They beat both of these teams already this season.

But some started doubting that the Deacs could beat Louisville during their final regular season match.

The Deacs left fans on edge against Louisville until overtime, when Bruno Lapa scored the golden goal in the 97th minute to win the game.

This electrifying play began with freshman Aristotle Zarris, who dribbled the ball into Wake Forest’s attacking third and found freshman Isaiah Parente just outside the top of the box. Parente sent it out wide to McMaster to cross it inside. McMaster found Lapa at the top of the box and sent him a fast-paced ball on the ground. Lapa took one easy touch to settle the ball, and fired a shot into the back of the net that curved right past the Louisville goalkeeper. Players, coaches and fans went wild. Everyone knew the Deacs put themselves in a good position for upcoming tournament play.

“We beat a really good team here tonight,” Muuss said after the game. “We just beat the No.4 seed in the best soccer conference in the country. Earlier this season, nobody could touch them and so I am really happy with this result and they are too.”