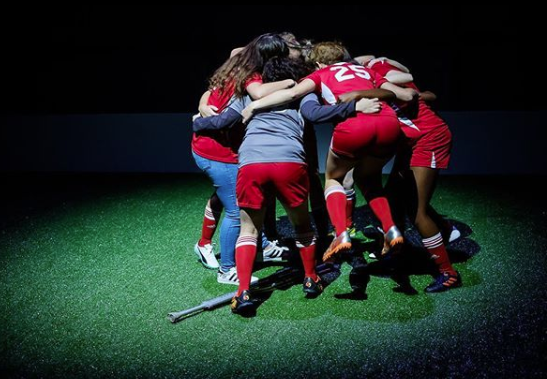 The newest theatre production, The Wolves, is about the trials and tribulations of a high school women’s soccer team during their indoor season. Touching on topics ranging from politics to injuries to classic teen drama, the story encapsulates the reality of teenage life within the microcosm of a sports team.

The setting itself was supposed to emulate any indoor soccer facility in suburban America in the wintertime, outfitted with high ceilings and turf. This was fascinating for me because I used to play competitive soccer and played indoor soccer during the winter. Originally from Chicago, I played most of my games in indoor facilities in domes or huge buildings like what was portrayed as the setting. I went to the matinee performance on Sunday, Oct. 28 and it was a decently full house watching with me.

As someone who has a lot of experience with a women’s soccer team, I think the director’s overall concept for the production was successful. One of the main reasons why I think the production was successful was the decision to utilize the Ring Theatre for the production. The turf encapsulated the entirety of the stage area and having the actors so close to you made you feel as though you were a part of the action. I also thought that the choice of a small all-female cast was helpful in portraying the overall themes that were intended. They made reference to their male coach, various fans, scouts for college teams and parents, but they never came into the stage and were rather referenced from afar. The all-female cast allowed for the discussion to be about female matters, such as periods and birth control, and it wasn’t met with any awkwardness from others involved. It was also compelling to hear about various discussions of current events through the lens of teenagers gossiping on the team. With a more encompassing cast, the powerful message about female adolescence would have been subdued by other issues. They touched on deep topics in the pre-game stretching circle, like the Khmer Rouge, immigration issues, using the word “retarded,” feminism and more. The script was definitely representative of the current millennial population — only some of them understood the complex topics and  almost none of them comprehended any of the issues in their entirety.

The simplistic costume design further illustrated the ideas of the team elements and the scene of them being at a soccer match. One aspect that was very helpful was that they all had numbers, making it easy to understand who was being referred to during the play.

Additionally, I was impressed by how the ideas of NCAA recruiting, Title IX, sexism and more were conquered through the lens of a high school team. One instance of this was the girls’ discussion of their coach, who is an alcoholic. In addition to always showing up drunk or hungover to the games, they referenced an instance in which their male coach asked them to scrimmage in their sports bras even though they didn’t want to. In the play, it is small instances like this that depict everyday issues working to perpetuate sexism in our society. The discussion of NCAA recruiting was of interest to me also, as I dealt with recruiting for cross country and am now helping my sister through it. The way that the team was happy for one another, but also insanely jealous and stressed, was both entertaining and sadly realistic in a lot of instances.

Finally, concussions are prevalent in women’s soccer, but are not as discussed as in many other sports, like football. One teammate subtly described how she now had had six concussions and was wearing headgear to try to prevent future injury. This is a scary but realistic depiction of soccer that was subtly, but importantly, portrayed through the girls’ conversations.

Finally, and most importantly, the cast was well-trained in soccer. While they never played a full game in front of the audience, some of the passing drills were elaborate and well-executed. After talking with junior Isabel Einhorn, who plays number 14, I learned that the cast practiced soccer at least once a week even before rehearsal started. I was impressed that while some of the players played soccer when they were young, most have not played recently, which is a testament to their hard work.

At the end of the play, after one of their teammates dies, the way in which the team came together was touching and personal for me as well. One of the cross country teams near me at home lost one of their runners during a race due to a cardiac arrest. Their team, and all of our surrounding area teams, came together and wore blue in support of them during the next race. In the play, their first game back after their teammate’s death was met with overwhelming support from friends and family.

Overall, I was really impressed with this production and enjoyed the realistic portrayal of teenage girls participating in such a tight-knit activity. On top of that, the intimacy of The Ring Theatre made the performance feel that much more personal.