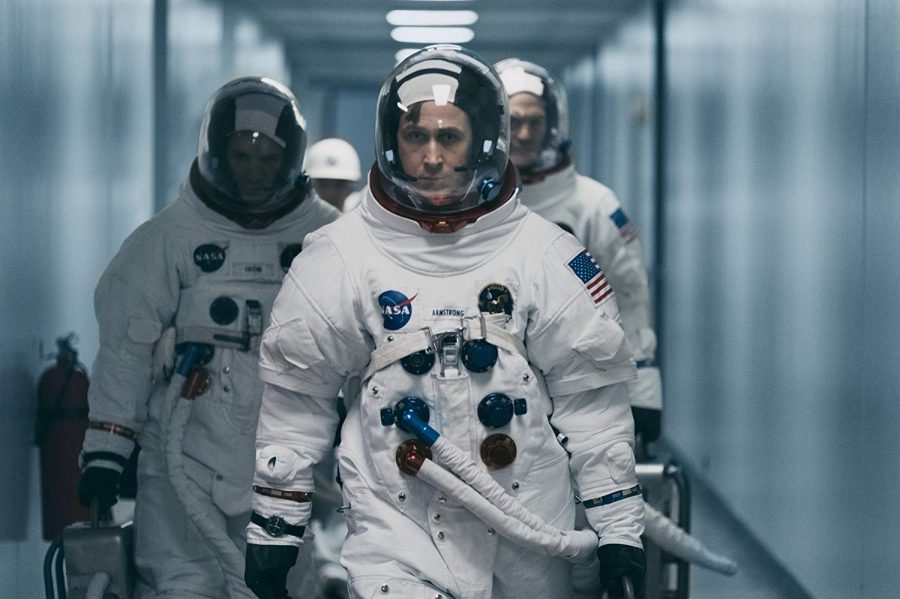 Such is one of the first lines uttered in Damien Chazelle’s new film, First Man, a powerful and gritty Neil Armstrong biopic that underlines the absurdity and uncertainty underlying America’s rat race to the moon. The line serves as a sort of tonal microcosm for the rest of the film, capturing the core of craziness within the space program’s perceived, unfettered novelty. The tones of radio communication almost parody the unprecedented, lunatic nature of the space operation. As Napoleon is thought to have said after his defeat in Russia, “from the sublime to the ridiculous is only a step; let the future generations judge.”

The story of the moon landing, in film, is one of personal histories subsumed by a national narrative of adamantine achievement. The Right Stuff perhaps does the best job of portraying the propagandistic public relations of the program, as shown when Fred Ward’s character gets all but a spanking in the back room after an unglamorous landing in the ocean. The space story is sometimes taught as a bulletin of rolled-out achievements, but it is really an opera, of brave men often swept along, with their families left emotionally untended and fumbling in the dust. And although there are many characters in First Man, the focus on Armstrong (Ryan Gosling) himself serves to center a narrative that is often decentered in an attempt at doing the men and the subject justice.

We start in 1961, with Neil as a test pilot pushing the limits of aerial endeavor, piercing the atmosphere and briefly witnessing the earth from above. The first sequence of the film contains yet another of what continuously proves to be one of the most spectacular shots in cinema, that of the astronautical-helmet-reflection. You know the structure: a lit-up control panel reflected off the crystalline glass of the helmet, the sun cresting Earth’s side, blooming and bursting in a diffusion of beauty, and then finally that sight shown with the tight-shot awe of the pilot’s eyes as he realizes he’s just burst the envelope of human achievement. It is as magical and inspirational as anything cinema has ever produced, and the updated version of it in First Man does not fail to stir us.

Armstrong continues along the path to space in a tale most more or less know. He, as well as other pilots, go through an unconscionable battery of physical tests (perhaps no two better adjectives, since the tests cause them to all pass out), as well as a rigorous curriculum in “intro to rocket physics.” Armstrong’s closest friend, it seems, is Ed White (Jason Clarke), who is his neighbor as well as his competitor in space. The two get along well enough, and the cadre of astronauts-to-be form a little community in their Houston neighborhood, celebrating holidays and looking at the stars. Of course, that is, until they begin to die. White, along with two other astronauts, perish in a tragically brief and unstoppable cockpit fire while on the ground, while Armstrong is at the White House representing NASA. Neil finds himself unhelpful and helpless in the face of random disaster, and eventually appears as one of the only ones left to go to space. Armstrong, as well as Edward Aldrin (an acerbic and boorish Corey Stoll) and Mike Collins (Lukas Haas), commands the Apollo 11 on the first manned trip to the moon.

There is not much more plot to elaborate on because we know the endgame, but what makes Chazelle’s film gripping is its documentary realism, and its sharp focus on Armstrong himself, instead of the wide-pan approach other filmmakers have taken (and done well with). For Armstrong was a man of undiscerning tastes, of an even-keeled unassertiveness that allowed him to (somewhat) calmly command a vessel to the moon. Neil is the engineer archetype: nice, exacting, unperturbed and emotionally inarticulate.

Unfortunately (and this is what Chazelle captures with astuteness), the emotional wreckage and strain on Neil’s family, specifically on his wife Janet (Claire Foy), springs forth a philosophical morass of sorts. For the Armstrongs, Neil’s voyage, training and resultant disposition becomes akin to a man of war. When he is home, he finds it hard to sustain conversation or open up; when he is away, which is most of the time, he is completely severed, concentrated fully on his mission. Maybe that’s just Neil, or maybe he’s been a bit debased.

It seems the only thing that stirs Neil is the death of his baby daughter, who haunts him throughout the film. But Neil’s instinct to stay bottled up is why he is the perfect man to send into space; that may also be why, although Chazelle’s film does the personality of Armstrong justice (in response to a question about his reaction at manning the flight to the moon, Armstrong says, “I was pleased.”), Chazelle is forced to provide drama, and tension. How does one portray and create a film about a fundamentally uninteresting person’s relation to a history-defining deed? One would naturally assume that the result would be, yes, uninteresting, but it is not, and it is because, thankfully, Chazelle allows for some emoting.

The emotion, though, hardly ever comes from Neil himself. In both The Right Stuff, and even more so in First Man, we can see the film as a wives’ tale. Claire Foy plays Janet Armstrong with the fragility of a tittering glass about to shatter, yet she somehow is not caricatured. She is embodied with emotional truthfulness and assumes, after realizing Neil is more than preoccupied, the role of a matriarch. She eviscerates Deke Slayton (Kyle Chandler, perfect in his role, and unconsciously situating himself as the hard-knuckled, vérité version of Alec Baldwin from this year’s Mission Impossible — Fallout), the first chief of the Astronaut Office. When NASA cuts off Janet’s radio tuner as one of Neil’s missions, Gemini 8, begins to go south, she calls the “esteemed” space program “a bunch of boys building models out of balsa wood.” She has a point.

The space program was formed from an earnest and full-throated attempt to best a rival. America’s masculine powers-that-were had to beat the Soviet’s at all costs, and they catapulted their contest onto a galactic stage, funneling money and resources into what was by all accounts a little-understood, prematurely green-lit operation. Yet we did it. It was a feat of will power, of aggression, and of sacrifice, but it is also a story of domestic cataclysm. No one could even fathom tolerating sleeping under the light of “a Communist moon,” as Lyndon Johnson says in The Right Stuff, but as this desire was coming to fruition, families were shed like skins.

Expectedly, there is a lot of silence in First Man. It comes as men pierce through to space, as they step out of the moon capsule, etc., but the silence seems to portend a sort of personal requiem. When Neil returns from his expedition, he greets his wife behind a glass partition in a quarantine zone. The two of them reach out, touch the glass, and look at each other. It’s an encapsulating moment that is an anti-E.T., anti-quixotic look at space, because Neil is now, and has been for some time, to his family and to his world, a man lost in space, an extraterrestrial.  His head will always yearn skyward.