Teju Cole Speaks On The Power Of Photos 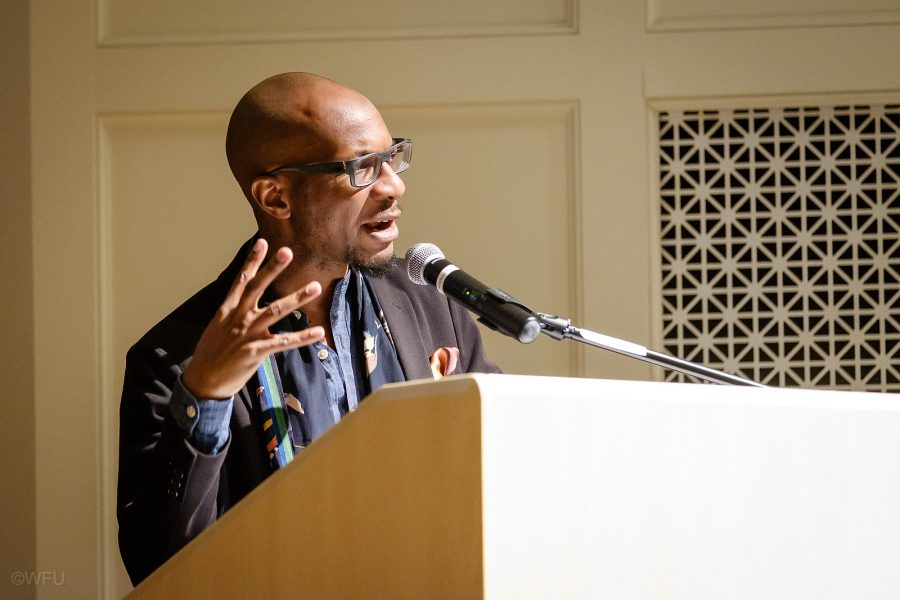 The auditorium seats in Porter B. Byrum Welcome Center were filled to capacity well before the 6 p.m. start of the Voices of Our Time guest speaker event on Tuesday, Oct. 30.

This sizeable crowd was brought together for a sole purpose — to listen to acclaimed photography critic and novelist Teju Cole discuss the power of photography and Blind Spot, his most recent novel fusing photography with prosaic writing.

After President Nathan Hatch’s introduction to Cole’s numerous credentials as the renowned photography critic of The New York Times Magazine, the Gore Vidal Professor of the Practice of Creative Writing at Harvard and author of award-winning novel Open City and and essay collection “Known and Strange Things,” Cole was welcomed to the podium with resounding applause.

Humanizing his various accomplishments in the artistic and intellectual realms of society, he humbly accepted the applause and delivered a candid discourse on the importance of using photography to exhibit inclusive portrayals of humanity.

The source of Cole’s humility comes from his proclamation that “the voice of authority is not as interesting … subjectivity is the attraction.” He revealed a specific instance of vulnerability as the source of inspiration for his photography and for the creation of Blind Spot.

This referred to his realization one day in 2011 that he could not open one of his eyes during an attack of papillophlebitis, or “big blind spot syndrome.” Although only altering his vision temporarily due to a successful laser-eye surgery and the subsequent return of his vision, he reflected that it was a euphoric moment for the way in which he viewed the world as a photographer.

Likening his experience to that of the blind man in the Bible who rubbed mud on his eyes and could suddenly see, Cole said that he opened his eyes and began to work on his newest project, Blind Spot, a collection of his photography paired with prosaic reflections on the images portrayed in the novel.

He explained that Blind Spot began with a photographic endeavor in Switzerland shortly after he “opened [his] eyes” to a new perspective of photography as the “way terrain retains memory of what happened to it.”

In Blind Spot, there are 150 images reflecting this new perspective, including one image that appears twice in the novel with different variations of light exposure. These images are paired with textual reflections that he wrote for each photograph, which he said are often inspired by the language of the Bible and Homer. In this way, he exhibits photography as a reflective experience.

Cole highlighted two images in particular during his discussion of Blind Spot that represented the central tenets of his work. It is the image that is presented twice in the novel, with different light exposures in each one. Both images depict a boy who tightly grips a railing by the Congo River. In the first one, the expression of his face is hidden due to the low level of exposure. However, the second representation of the photograph, which is also the final image in the novel, clearly portrays the eyes and facial expression of the boy due to an increase in exposure.

Through this alternative perspective, one attains a more profound comprehension of the emotions and humanity represented in the photograph.

Cole summarized this phenomenon succinctly: “Darkness is not empty — it is information at rest.”

This illustrates his focus on changing the scales, boundaries and borders of modern photography and his introduction of alternative methods of photographing the human experience. For instance, from just a simple alteration of light, Cole completely altered the first image in order to illuminate the boy’s facial expression and to provide insight into the boy’s emotional state and humanity.

This provides readers with a heightened awareness of the impact of changing perspectives. Cole underwent his own “blind spot” in 2011 following his diagnosis of “big blind spot syndrome” that inspired this photographic collection.

This progressive mode of photography and literary discourse that Cole engages in elucidates what he refers to as the goal of using photography to portray others “with a sense of humanity that includes them.” Specifically, he discussed the transcendence of racial boundaries in photography, like the development of exposure levels that could depict black skin like that of the photographed Congolese boy.

He referenced Roy DeCarava’s work, like “Mississippi Freedom Marcher,” as one of his inspirations for this method of “playing in the dark.” This method involved camera setting adjustments from the traditional Shirley card, which set a standard for photographing white skin, to an alternative setting that could photograph dark-skinned people.

Cole said, “we are surrounded by technology that is exclusionary,” like the discriminatory effect of the traditional Shirley cards, and that the object of portraiture photography should be to “get others right … with a sense of humanity that includes them.” He envisions photographing an inclusive portrait of humanity.

He also frequently critiques the work of other prominent photographers like DeCarava through his articles in the On Photography column of New York Times Magazine and through his travels to the locations of photographs to see “something [he] cannot see in the library.”

Cole ended the night with a proclamation that “the greatest pleasure is freedom,” and a declaration of his hope to continue to photograph a variety of subjects that portray the wide range of human experience through inclusive images. To evoke a sense of the boundaries that his work overcomes, his work is available for viewing from now until Jan. 21, 2019 in the Hanes Art Gallery.