Deacons Fall To Syracuse Over Homecoming 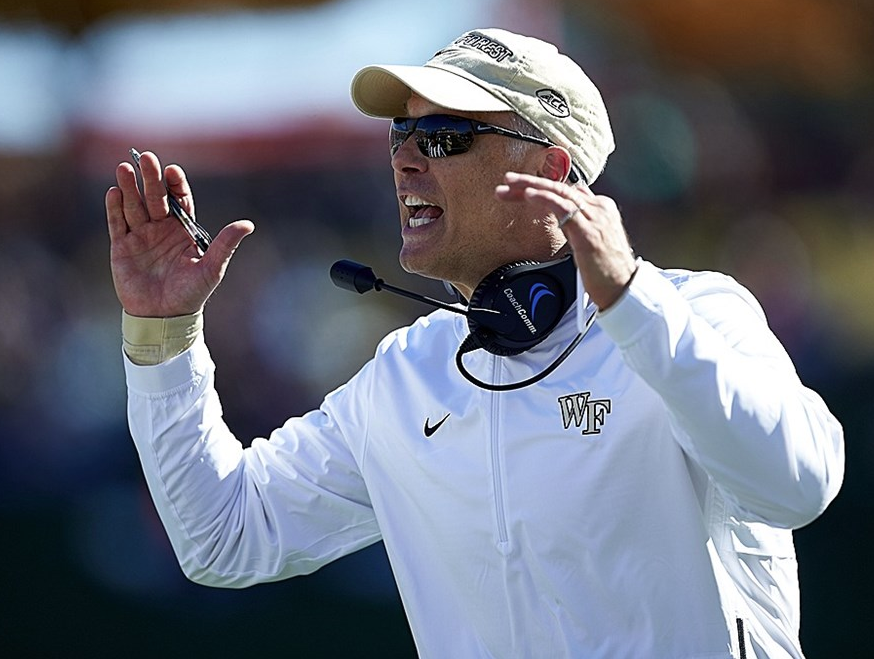 In a matchup featuring two of the best offenses in the ACC, both defenses surprised and even outperformed expectations. However, despite improvements on defense, the Demon Deacons could not escape two narratives that have plagued them all year: another ACC loss at home and another injury-plagued game.

Wake Forest entered Saturday’s matchup against then-19th ranked Syracuse in a borderline must-win situation. The Demon Deacons had just conquered their fourth win of the season and first in the ACC on the road against Louisville. With two remaining home games against Syracuse and Pittsburgh, they needed to add two more wins to become bowl-eligible for the third consecutive year under Head Coach Dave Clawson. The math was simple: secure home-field advantage, and the Deacs would be playing in a meaningful game in December.

The Demon Deacons sure looked determined to secure their end of the bargain against the Orange. Wake  Forest jumped to a 10-0 lead early in the first quarter thanks to great defensive coverage and a clicking running game. Despite being plagued by injuries and poor alignments all season, the Wake Forest defense looked ready to take on one of the ACC’s hottest teams. Junior Cornerback Essang Bassey had perhaps his best performance of the season with five pass breakups, one shy of the school record. The communication, alignment and proper sets were all clicking for a defense that struggled all year with mental mistakes.

However, the offense, which has been the far more consistent unit, was not able to capitalize on short field position and early defensive miscues by Syracuse. Early in the game, the Wake Forest offense receive the ball on Syracuse’s territory twice and only managed to get a field goal out of it.

Freshman QB Sam Hartman missed two downfield throws that could’ve turned into touchdowns or set them up for more points. Instead, Hartman’s throws were off early, and the true freshman quarterback struggled with the pressure generated by the Syracuse pass rush.

“The last three games I think we have been very inconsistent in the O-line,” said Head Coach Dave Clawson. “[Offensively] we did not play well on the first half. We gave up a lot of pressure. There were times that we had guys open and Sam [Hartman] didn’t have time.”

Hartman was sacked a season-record of six times in the first half. Some of it was due to poor O-line play, but Hartman himself, upon sensing pressure on some occasions, tried to break contain from the pocket too soon and ended up running into a Syracuse defender. Wake Forest’s slow start on offense allowed Syracuse to catch its breath, and on a 3rd and six, Orange QB Eric Dungey found Jamal Curtis for a 33-yard pass, which ended up igniting Syracuse’s first score. What followed was a shift in momentum, as Syracuse scored 28 unanswered points.

To make matters worse, Wake Forest turned the ball over three times on offense (two fumbles and an interception) and took too long to find an offensive rhythm.

The Deacs still rallied back on the second half, bringing the difference down to 11 points at the beginning of the fourth quarter. But the damage was already done.

Wake’s defense started getting tired and tackled poorly. They were not able to contain Syracuse and Eric Dungey in the second half.

The Syracuse QB finished with a team-high 119 rushing yards and a touchdown, being highly effective on QB Draws and scrambles.

The loss wasn’t the only bad news on Saturday. Starting QB freshman Sam Hartman sustained a right-leg injury late in the fourth quarter and is now officially out for the remainder of the regular season. This is a tough blow for the Deacs, as the freshman QB showed a lot of promise with his level of maturity and composure on his first season leading the offense.

Hartman was on pace to set new records on passing yards, touchdowns and completions by a true freshman quarterback in Wake Forest history, records all held by Wake Forest Alum and Belk Bowl MVP John Wolford.

Hartman is the 12th scholarship athlete on the roster to sustain a season-ending injury in 2018. Furthermore, Hartman will be the 38th athlete to miss a game this season.

The most injury-plagued position is at linebacker, where the only starter healthy at the moment is redshirt junior Justin Strnad.

“It’s unbelievable. We moved Demetrius Kemp to linebacker and he gets hurt in the first quarter,” said Clawson. “I’ve never seen anything like this. It’s just that one position [at linebacker] we can’t stay healthy. What happens is that now you’re putting freshmen in and Syracuse wore us down.”

On top of dealing with injury challenges at linebacker and quarterback, the Demon Deacons will now have a short week to prepare for their next game, as they travel to Carter-Finley Stadium to face 14th-ranked NC State Thursday at 7:30 p.m.

“I think [playing on a Thursday twice] is crazy. After nine games in the season, in November, that we’re going to play one of our rival games in a short week. We’re [already] having a hard time recovering on seven-days rest,” Clawson said. “I don’t see how this is good for the players and their health.”

After falling to 4-5, the Deacs now need to win two out of their last three games to be bowl eligible, which means that in addition to having to win at home against Pittsburgh, they need to steal one of their road games at NC State or the season finale at Duke.

It is already a tough three-game stretch with road games at NC State and Duke. When you factor in the loss of Hartman and a short week to prepare for the NC State game, the odds really stack up against the Demon Deacons.

“We need to win six games. We got last week [against Louisville] which helped, obviously, this was one that was important to us that we wanted to get,” said Clawson. “Now, we gotta find a way to get a game on Thursday and we’ll do that.”