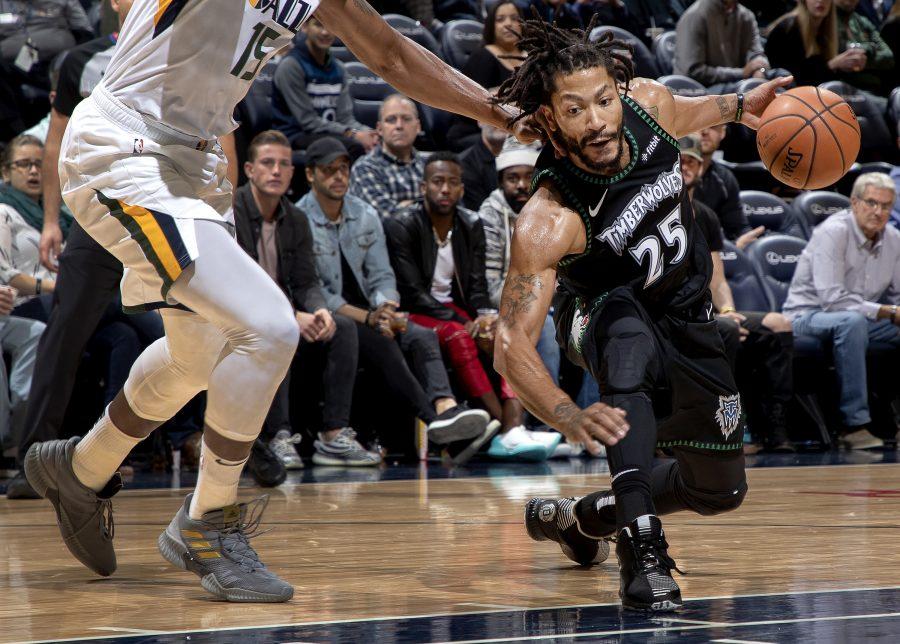 The Minnesota Timberwolves' Derrick Rose drives the lane in the third quarter against the Utah Jazz at the Target Center in Minneapolis on Wednesday, Oct. 31, 2018. The Timberwolves won, 128-125, behind a career-high 50 points from Rose. (Carlos Gonzalez/Minneapolis Star Tribune/TNS)

It had been seven years since Derrick Rose became the youngest Most Valuable Player of the NBA, but things did not go well for him after that.

Four serious knee injuries. Then, several small but consistent injuries. The former MVP was confronted once in an interview about what injuries had done to him: “If those (injuries) happened to another player, he would have retired.”

But at the age of 30, Rose scored a career high of 50 points at his third new team in three years, Minnesota Timberwolves, on Halloween night. The media teased that Rose wore a costume of his 2011 self, who was the youngest MVP and carried the Chicago Bulls to the Eastern Conference Finals.

There were no words to describe Rose’s performance during the game against Utah Jazz. He came out strong in the first half with a solid 16 points, but more valuably he scored 34 points in the second half to help the team win by three.

Rose made a critical three pointer in the fourth quarter to help the team tie the game with only a minute remaining, and immediately after he made two layups in the following possessions. Last but not least, Rose made two free throws to seal the victory and got his career high 50 points, and that’s when the whole stadium chanted “MVP! MVP! MVP!”

But there was a bigger emotional value to Rose. His eyes went red after he made the game-winning free throws calmly, and he burst into tears when the siren marked the end of the game.

“[This game] meant everything to me, man. I worked my ass off,” Rose said in tears during the post-game interview.

Indeed, 50 points marked all the efforts Rose had made for his game. On one hand, Rose changed so much of how he played due to the injuries as he made a lot of jump shots that he was not good at before; but on the other hand, he was still himself, attacking the rim 34 times during the game — the most a player had done for the past two seasons.

His performance also proved that he still owned a place in the league after the disappointments during all these years. After the reoccurrence of the injuries, he struggled to settle in a team and he only signed a one-year minimum salary contract with the Timberwolves. While he used to only be a point guard, Rose now had to shift his roles based on the need of the team. That required him to try different game styles that he might have been unfamiliar with before. However, his hard work prepared him well with solid mid-range and three-pointer performances.

In 2016, Rose admitted that his body could not afford to play as quick as he was before, saying that “the vintage is gone.”

But here he is, writing himself a totally different but encouraging story in the league. Averaging 17.4 points, 3.5 rebounds and 4.6 assists per game, Rose has been an inevitable part of the team.