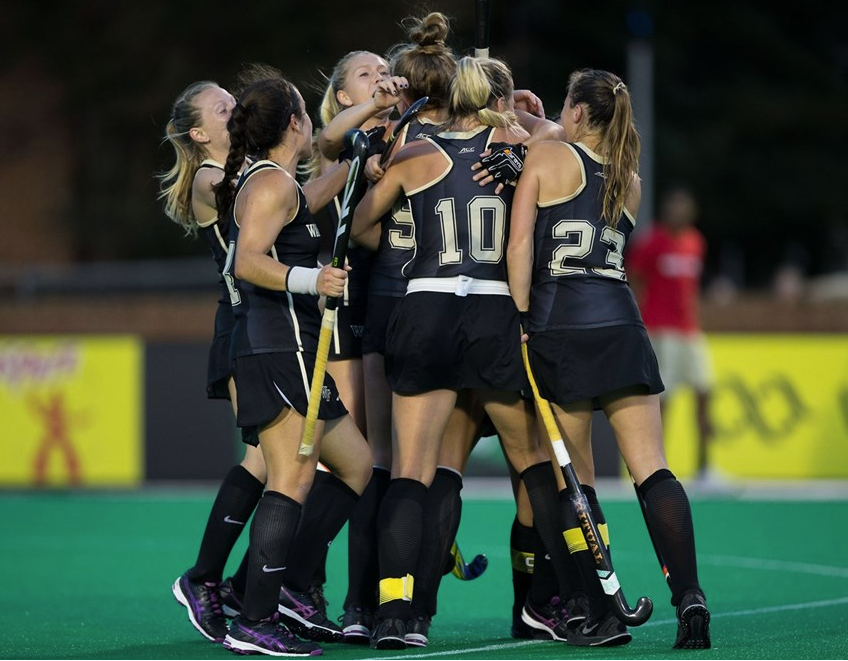 The path that was laid out for the No. 6 women’s field hockey team was not an easy one. First, it was playing No. 3 Louisville in the quarterfinals on Thursday, Nov. 1. Then, it was playing second-ranked and in-state rival Duke on Friday, Nov. 2. Finally, it was playing top-ranked North Carolina in Chapel Hill on Sunday, Nov. 4.

It was a whirlwind of a weekend and a feat that many outsiders never would have imagined. But, for coach Jen Averill, in her 27th year as the head of the Wake Forest program, these were just a few more games that the team needed to win.

In the Louisville game on Thursday, the Cardinals went ahead early, scoring their first goal off of a penalty corner a mere three minutes into play. The Deacs were resilient, and freshman Grace Sambrook evened the score 16 minutes into the game. The Cardinals then retook the lead on a controversial shot over the keeper’s head in the 29th minute, which was matched in the final minutes of the first half by senior Jule Grasshoff’s rocket into the back of the net, tying the score at two apiece heading into the half. Both defenses were tough in the second half, not giving much up, but senior Emily Adamson was able to launch a shot behind the keeper to give the Deacs the advantage. They were able to hold off an offensive attack from Louisville in the second, leading them to a quarterfinal victory and setting up a date against Duke the following day.

No. 2 in the Atlantic Coast Conference, and the number three team in the country, it looked to be a tough matchup on paper against Duke for the Deacs. Grasshoff, who also assisted in many of the scores the day before, was able to score the game-winner for the Deacs. Duke scored early, just two minutes into the game, to attempt to set the tone of the game. A mere seven minutes later, Sambrook scored her second career goal and second of the tournament in the 10th minute of play to even the score. Duke then went up again, scoring off a rebound to go up by one. At the end of the half, in similar fashion to the prior day, the Deacs were awarded a penalty corner and sophomore Elisha Evans tapped in the equalizer for the Deacs heading to the break. Just two minutes into the second half, freshman Laia Vancells gave the Deacs the lead off of a rebound from a penalty corner. The Blue Devils answered back with their own goal from a penalty corner deflection, but Grasshoff was able to score a goal off of the penalty corner with 13 minutes left in the game to put the Deacs up 4-3. The Deacs were able to hold on for the rest of the game, and advanced to the title game of the ACC Tournament against top-ranked Carolina in Chapel Hill.

Top-ranked Chapel Hill demonstrated just how good they were in the ACC championship game. The Deacons fell to the Tar Heels 7-2 at Karen Shelton Stadium in Chapel Hill. Grashoff continued to shine throughout the tournament, scoring both of the team’s goals, but the offensive firepower of the Tar Heels was too much to contain. The Heels scored four goals in the first half, doubling the Deacon’s scoring total going into the half. Carolina continued controlling the game straight out of the half, scoring three unanswered goals in the second half to win the game 7-2.

After the game, the team looked towards the NCAA Selection Show to see if they got a bid into the NCAA Tournament. The show aired on the night of Sunday, Nov. 4 and the Deacons received a bid for the second straight year. The team will face Iowa in Durham, NC on Friday, Nov. 9.