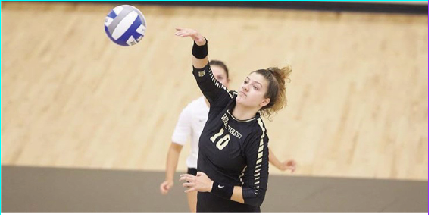 NC State came into play coming off of three consecutive losses to ACC opponents. The Wolfpack managed to secure its fifth victory in conference play, triumphing over the Deacons by a score of 25-21, 24-26, 25-23, 20-25, 15-5. NC State finished with a 19.9 hitting percentage, doubling Wake Forest’s mark of 9.3 percent.

Sophomore outside hitter Myca Mitchell led the efforts for the Deacons at the net with 16 kills, while sophomore setter Madeline Holt notched 40 assists and senior libero Hailey Brooke McFadden added a team-high 14 digs. For the Wolfpack, senior outside hitter Teni Sopitan posted a whopping 20 blocks.

In the first set, the two squads stayed even until 13-13 when the Deacons ripped off a 5-1 run to take their largest lead of the set at 18-14. NC State then procured a potent 11-3 comeback on the strength of multiple kills from Sopitan and three Wake Forest mis-hits to end the set, finalizing a 25-21 Wolfpack victory.

The Deacons answered back to even the match at 1-1 with a 26-24 set two victory. Della posted four of her kills in the second set, as Wake Forest hit 27.6 with a match-high 13 kills in the set after posting just an 8.6 hitting percentage in the first frame.

After ceding a 20-11 lead in the third set, the Deacons surged back to win clutch late points. Wake Forest won eight of 11 to pull within four at 22-18. A 4-1 run from the Deacons brought the score within one at 23-22, but the Wolfpack sealed the 2-1 match advantage taking the final two points of the frame.

Despite falling in the opening set, the Deacons started the match strong, registering a 23.3 hitting percentage with 13 kills. However, the Tar Heels were slightly more productive, notching 16 kills and hitting 24.3 percent. Both sides traded points early until North Carolina went on an 8-0 run to take a 15-9 lead. Wake Forest pulled within two multiple times late in the frame, but UNC sealed the 1-0 lead taking the first frame 25-22 with a kill from Cox.

Momentum stayed with the Tar Heels in the second set as they hit 30 percent while holding the Deacons to 3.8 percent and nine kills. North Carolina held on to a small lead for the majority of the set, but the Deacons fought back to cut the deficit to one, trailing 19-18. A 5-0 run from the Tar Heels gave them for match point. Wake Forest answered back with a kill from Della and a Tar Heel error, but UNC held on for the 2-0 advantage.

Wake Forest took advantage of four early miscues from North Carolina and scored six unanswered points to open the third set. UNC notched a 6-0 run of its own to pull within one at 10-9. The Tar Heels took their first lead of the set following a 3-0 run at 23-21. The Deacons tied up the frame twice, but UNC clinched the three-set victory with a kill and a Deacon error.