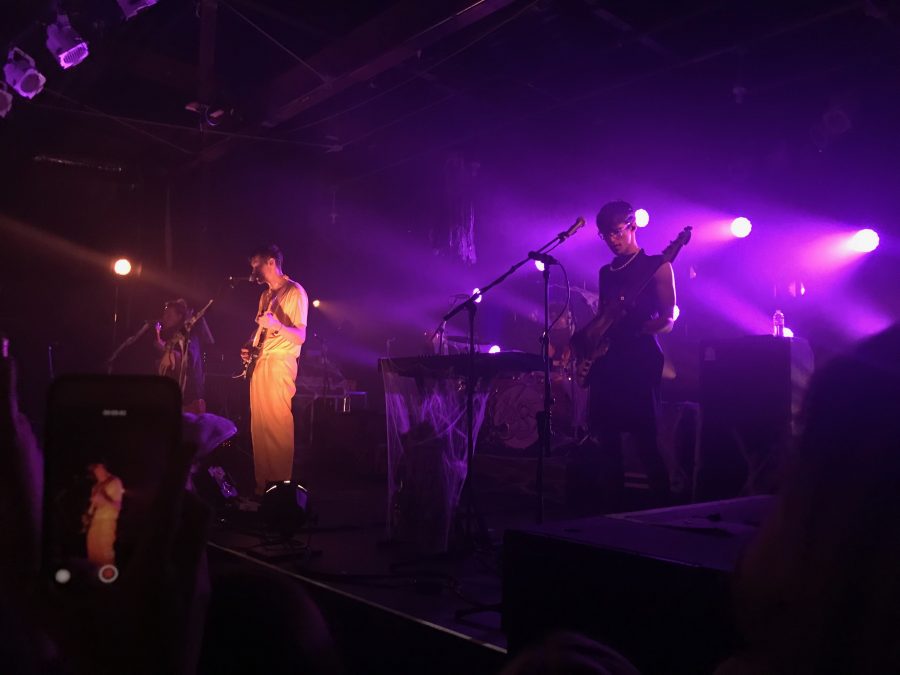 Last Wednesday, I skipped out on the classic Halloween festivities to attend Hippocampus’s concert in Carrboro, NC. Taking place at Cat’s Cradle, an intimate concert venue that can only be accessed by walking to the back of a nondescript building, the band put on a vibrant, enthralling performance of their two albums, Bambi (2018) and Landmark (2017) and equally noteworthy EPs, warm glow (2017), South (2015) and Beautiful Creatures (2015).

Hailing from Minnesota, the group of five’s genre is self-described as “kinda pop.” Blending rock, indie and electronic vibes, Hippocampus has a unique sound that distinctualizes itself from similar bands such as COIN, Coast Modern and Rainbow Kitten Surprise. Their style is most poignantly represented in Bambi with songs like “Doubt” and “Golden” shining through.

Before the main act, The Districts took the stage to start off the night. Embracing Halloween with coconut bras, a ketchup bottle bodysuit and other obscure outfits, the group had a surprisingly different sound than Hippocampus. Much more influenced by classic rock, their set list included the grungy “4th and Roebling” and the more chill “Young Blood.” Although I had never heard of the group before, I was impressed by their dedication to performing. By the end of the last song, the members were drenched in sweat and lost about half of their costumes from head banging.

With an upbeat energy already established, Hippocampus kicked off their set with “Bambi.” The crowd was immediately singing along with the techno pop beat of the song, which is their most popular from their new 2018 album.

The group also kept in line with the Halloween theme — guitarist and pianist Zach Sutton was dressed as a housewife (complete with pearls, a wig and full bottle of wine drank throughout the night), guitarist Nathan Stocker, drummer Whistler Allen and saxophone player DeCarlo Jackson took on Naruto characters and lead singer Jake Luppen took inspiration from an “It’s Always Sunny in Philadelphia” skit.

Throughout the concert, Luppen and Stocker cracked jokes between playing favorites like “Suicide Saturday,” “baseball” and “Simple Season.” Alluding to the special holiday, they also played “Vines” and “Monsoon,” which Luppen said they never perform live.

Thanks to Cat’s Cradle’s small space, I was able to make my way to the front of the crowd fairly easily. With a great view of the entire stage, and a crowd as equally invested in the music, I was completely engrossed in their performance. From Luppen’s facial expressions while singing to Sutton’s ability to quickly switch from guitar to piano, you could tell how all of the members of Hippocampus are both musically inclined and just plain talented.

Although I missed out on Halloween parties and elaborate costumes, I was able to bask in the music of a group of really talented artists. Hippocampus’s concert at Carrboro was 100 percent worth the hour and a half drive.