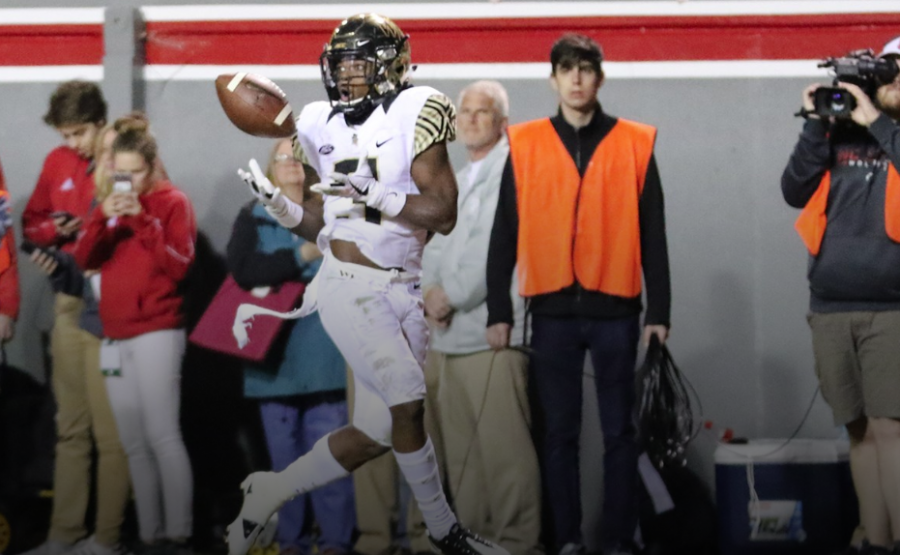 The Demon Deacons entered Carter-Finley Stadium needing nothing short of a miracle to pull out a win. They were double-digit underdogs against a No. 14 NC State squad fresh off a resounding win against Florida State and led by future NFL QB Ryan Finley.

The Deacs, on the other hand, had an injury-plagued roster playing in a short week game after losing their starting QB for the year. As I said, it would take a miracle to win this game, and that’s exactly what happened Thursday night.

Wake Forest started the game on the wrong foot, as star WR RS sophomore Greg Dortch failed to properly field a punt inside Wake Forest’s 11-yard line and NC State recovered it to start their possession already in the red zone. However, the defense held the Wolfpack to only a field goal. Yet, the Deacon’s offense struggled to generate any points against a strong NC State front-seven that heavily pressured first-time starting QB RS sophomore Jamie Newman. Newman also struggled early to build chemistry with his receivers, which was more than expected given that this was his first full-game leading the offense.

Amid the offense’s struggles, the defense was tasked with stopping an NC State offense filled with guys expected to hear their names on the upcoming NFL Draft in QB Ryan Finley, WR Kelvin Harmon, LT Tyler Jones and LG Terronne Prescod. A tall order for almost any defense, especially one battling as many injuries at linebacker as the Deacs have. Yet, the Deacs managed to hold NC State to two field goals, including the punt-return fiasco, over their first five offensive possessions, while tailing a season-high four TFLs in the first quarter and 11 through the whole game.

“Defensively, we got lined up, we defended the run and we didn’t allow a lot of explosive plays. Those are the three things we had to do,” said Head Coach Dave Clawson during Tuesday’s press conference. “I thought given the circumstance and their offense, that was the best defensive performance of the year.”

The defense played a pivotal role in keeping the game close, but the Deacs were still trailing by 10 points as NC State went to halftime with a 13-3 lead. The offense needed to step up or the game would eventually get out of hand in the second half. That’s when Newman enters the equation.

Playing your first start on the road, in a tough environment against a top 15 team can rattle even the most tough-minded of the quarterbacks. On top of that, with the running game not clicking as much in the second half, Newman was now being asked not to just hold the fort and avoid turnovers to keep the game close, he was being tasked with getting the Deacs a win at Carter-Finley for the first time since 2006.

On their third drive in the second half, Newman throws a bomb downfield on a third and nine to RS freshman WR Sage Surratt who miraculously caught it one-handed while falling against an NC State defender for a 43-yard gain. It was the only jolt of confidence that Newman needed. On the following play, he took another shot downfield, this time to senior WR Alex Bachman who also made a SportsCenter-worthy catch for a 38-yard touchdown. Just like that, after two plays, the Deacs were back down only a field goal late in the third quarter.

“No matter if you’re No. 1 or No. 2, you have to be prepared like you’re going to play at any moment,” Newman said in an interview for the Winston-Salem Journal after the win.

And the moment certainly came for Newman. After Wake Forest stopped NC State on a 4th and 3 inside their own 20-yard line, Newman was given the ball back with 1:34 left, no timeouts, down three.

He looked calmed and collected leading the Deacs all the way down to NC State’s 32-yard line with 37 seconds remaining. On a 2nd and 10, NC State’s Defensive Coordinator Dave Huxtable dialed up a blitz up the middle. Newman barely had time to hit RS junior TE Jack Freudenthal before getting laid down by NC State’s Safety Tim Kidd-Glass. Bachman, who was crossing in an opposite direction of Freudenthal, made a huge block setting Freudenthal off to the races for 32 yards and the game-winning touchdown.

“I thought he was calm, cool and collected. He didn’t show any signs of being worried or anything,” Surratt said about Newman on the game-winning drive. “I think he was ready for the moment and he definitely capitalized on it. We’re all proud of him.”

Newman finished the game completing 22 out 33 passes for 297 yards and three touchdowns, while also adding 44 yards through the ground. For Wake Forest RS senior center Ryan Anderson, the plays Newman didn’t do were as important as the ones he did do in the final drive, as he referred to Newman not forcing the ball or taking a sack.

“Obviously, the two-minute drive was awesome. He made some unbelievable throws and decisions. Some of his best plays were in the two-minute drive, the touchdown obviously, but also when he threw the ball away. He made a really smart decision because we didn’t have any timeouts and we could not take a sack. That was awesome to see,” said Anderson during Tuesday’s press conference.

This was Wake Forest’s first road win against a top 15 team since defeating North Carolina in 1979. This also means that the Deacs are now up to five wins on the season and only need one more win over their last two games to become bowl eligible for the third straight year under HC Dave Clawson.

Pittsburgh is coming off a dominant performance against Virginia Tech. The Panthers rushed for a total of 492 yards en route to a 52-22 win.

“Pitt, since October, has won four out of five. They have beaten some really good football teams and their only loss is by five to Notre Dame in a game where they had a chance to win. Offensively, they are averaging 250-260 yards a game on the ground,” Clawson said. “Their two backs, Ollison and Hall, have 1900 yards rushing on the season already. Ollison is already over 1,000 and Hall will probably get there.”

The Demon Deacons will host the Panthers Saturday, Nov. 17 with a noon kickoff time.