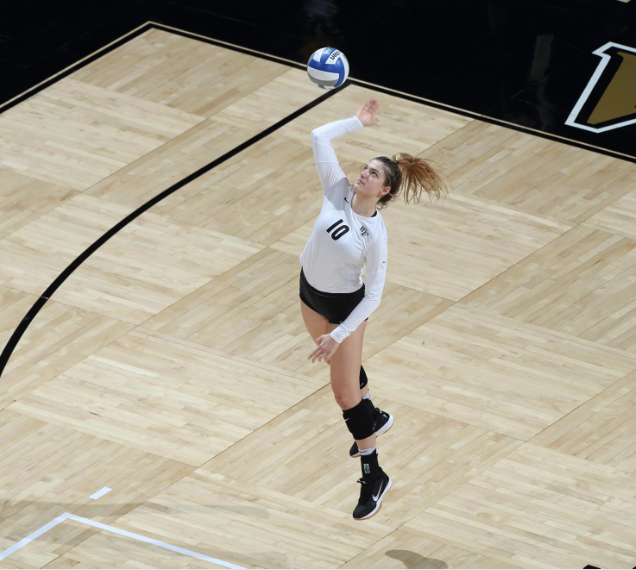 Miami jumped out to a 2-0 match lead with a 25-16 victory in the first frame and a 25-20 decision in the second set. Wake Forest struggled to compete with Miami’s power early on, as the Canes hit a match-high 41.7 percent in the opening set and followed with a solid 20 percent in the second frame, totaling 29 kills while holding the Deacons to just 17 kills in the first two sets.

The Deacons remained hot offensively in the fourth set, posting a 37.1 hitting percentage and a tremendous match-high of 18 kills. Kuhn and Holt led the charge at the net with nine combined kills. The Deacons went on a 4-0 run early in the set, taking a 9-4 lead and forcing the Canes to call a timeout. Miami regrouped to tie the set at 13-13. The teams continued to trade points back and forth until a kill from Holt and an attack error from the Canes gave the Deacons the 26-24 set four win to even the match at 2-2.

Miami jumped out to a 6-3 lead in the fifth and final set as Wake Forest called a timeout. The Hurricanes continued to lead in the frame, up 10-6, but nine unanswered points from the Deacons sealed the comeback victory. Sophomore middle blocker Olivia Saunders recorded two late kills and sophomore outside hitter Paige Sebesta added three to power the Deacon offense late in the match.

After the match, Coach Ferguson explained that Wake Forest “play[ed] with [Miami] in the first two sets [but] the aces were the separation. We needed to clean up our passing. Everything else, blocking and attacking, we were doing okay and we were getting [Miami] in trouble but we weren’t finishing our blocks. And [the coaches] kept telling [the team], ‘Hey you’re right there, we’re not that far off, we just need to clean a few things up.’” The coaching staff’s words of encouragement paid off, as the Deacons secured their greatest win of the season.

Wake Forest’s second matchup came against the third best team in the ACC percentage-wise, as Louisville entered the matchup on Sunday having alternated wins and losses for three weeks. Louisville secured the 3-0 victory by a 25-16, 25-18, 25-20 margin.

The Deacons struggled to match the Cardinals’ prowess at the net, posting 25 kills and 16 errors to Louisville’s 47 and 18, respectively. Kuhn and Holt led the way with 9 kills and 22 assists, respectively. Senior outside hitter Amanda Green and senior middle blocker Jasmine Bennett led Louisville with 11 kills apiece.

Louisville sprinted out of the gates to a 7-3 lead off the strength of six early kills, setting the tone for the match. Wake Forest fought back to 10-11 thanks to multiple kills from Della. Wake Forest continued to keep the score close until 15-17, when the Cardinals ripped off an 8-1 run to secure the 25-16 win.

Wake Forest continued to struggle in the battle at the net, as Louisville posted nine early kills to take a 10-4 lead in the second set. The Cardinals maintained their lead throughout the set, posting 18 kills to take a 25-18 second set win. Louisville started off the third set quickly again, creating an 8-4 lead which they did not cede en route to a 25-20 set three win.