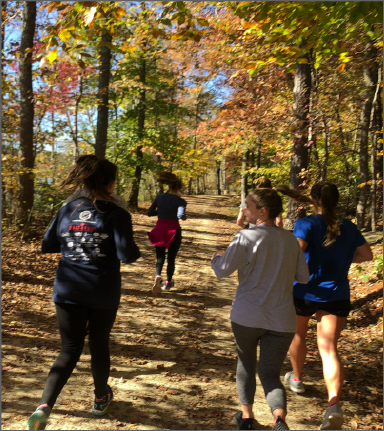 From the “We Run Winston” running group to the Running Club at Wake Forest to the Fleet Feet Running Club, Winston-Salem and Wake Forest are bustling with groups to help women train and run safely, the need for which has been amplified over the last few months with Mollie Tibbetts’ murder making national news.

On the evening of July 18, 2018, Mollie Tibbetts set out for a run on her normal trail, not knowing it would be her last. Tibbetts was a 20-year-old sophomore at the University of Iowa. After going missing during her run, her body was found on Aug. 23, littered with stab wounds in a cornfield nearby. This was a not a unique event. Women fall victim to men catcalling and harassing, stalking and assaulting, and more while running.

In a survey of Runner’s World readers, 43 percent of female runners sometimes experienced harassment on runs whereas only four percent of men did. However, they conveyed that physical violence against female runners is rare, at around three percent. Regardless, there is now a culture of mistrust and fear for female runners. It seems as though most women know of at least one person who has experienced some sort of scary situation while running. Wake Forest senior Jenna Truedson, a former collegiate cross country and track athlete, acknowledged that this fear is always in the back of her mind as a result of these stories.

“I know I’ve heard stories of other people on my team who have been followed with cars, and other unfortunate situations where guys come out and they’re following them … it’s just creepy,” Truedson said. “I think it’s definitely safer running with a group, just because you’re not as vulnerable to people driving or walking or anything, and people aren’t gonna cat-call as much or do anything.”

“I feel comfortable running on and off campus during the day, pretty much any time, depending on which area,” Anderson said. “It’s hard because Winston-Salem is so split in half between wealthy areas and underprivileged areas that there could be a lot more crime going on, but overall I feel very safe on campus.”

The Women’s Running Community on Facebook was extremely active in their discussions on safety and support in the wake of Mollie Tibbetts’ murder. The group has 79,913 members from around the world. Seventy-six women responded to questions posed to the group. Almost all of the women run alone regularly, but most of them carry some sort of protection: 61 of the 76 to be exact. The kind of protection is what varied the most. The various items mentioned included flashlights, stun guns, pepper spray, portable knives, small guns, their dogs and various types of online live tracking apps that family members can follow. Some ran on the treadmill for safety reasons and some felt comfortable running alone outside in the early hours of the morning. This group of women would not let fear get in the way of running, but, as Joanna White put it in her comment, “I totally enjoy my runs and relax, I just think it’s wise to be aware and prepared.”

Winston-Salem police records for the past few months indicate there are no reported cases of runners being harassed in any way in the areas surrounding Wake Forest’s campus, a reassuring sign for runners in this area. While Winston-Salem and Wake Forest both seem to foster good running communities, not all areas can say the same.

The Fleet Feet running store in Winston-Salem typically trains 1,500 hundred runners per year. Emily Davis, one of the owners of Fleet Feet, stressed that running safety is something that all runners need to take seriously, even if you think you are in a safe environment.

“The Mollie Tibbetts case is very tragic, and unfortunately in the world evil people will do evil things. You can take all the precautions in the world, but it’s hard to be prepared for every scenario,” Davis said. “Whenever you are going running alone, especially at night time, it’s important to tell friends and family where you are going and when you are expected to return, and, when possible, it’s always preferred to run with someone else. It’s best to run during daylight hours whenever possible, stay on the sidewalk when it’s available, and if running at night, be seen and run in safe locations.”