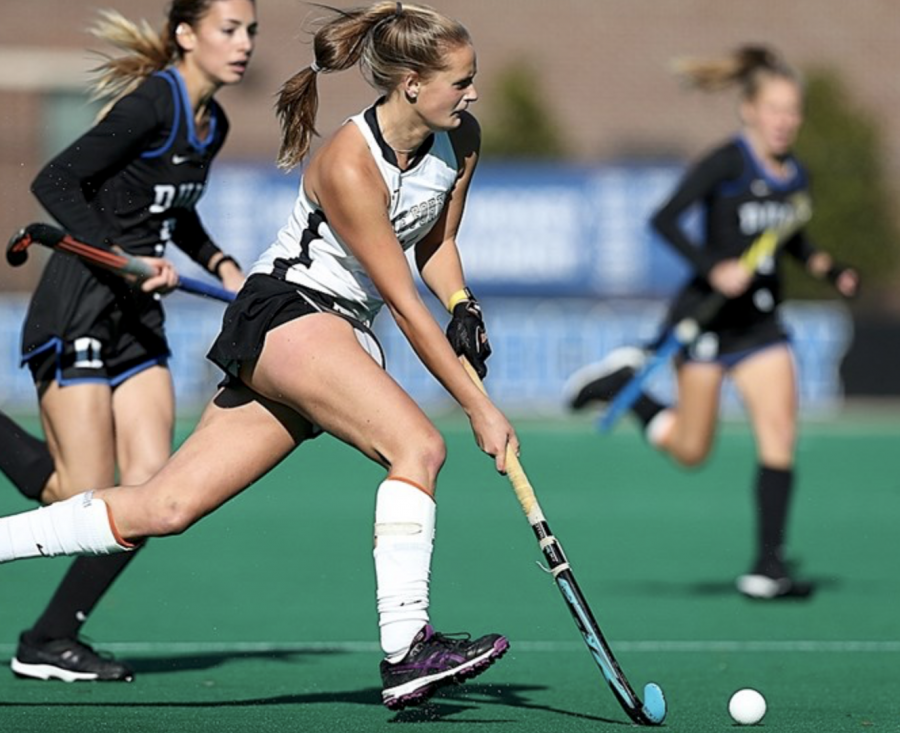 Jule Grashoff, a senior from Bremen, Germany, has come into her own as a scoring force this year for the women’s field hockey team. Through 21 games, Grashoff has 54 points on the year, scoring 24 goals and tallying six assists. In part due to her successes this year, the team made it to the ACC Tournament final and the Final Four of the NCAA tournament. Prior to Wake Forest, she played for Club zur Vahr Bremen and Groflottbeker THGC Hamburg and tallied a handful of top ten finishes in German national play. She saw action with the German Youth National team with U-16 in 2013, U-18 in 2014 and 2015.

In addition to a stellar senior campaign, Grashoff has contributed immensely in every year as a Deacon. In her junior year, Grashoff started in and appeared in all 20 games, leading the team with 16 goals and 14 assists. She tied for third in the ACC in goals and tied for the conference lead in assists, earning herself a place on the All-ACC First Team. In her sophomore campaign, she was named to the 2016 Preseason All-ACC Team, scored 16 goals and 10 assists, and was named to the 2016 ACC All-Tournament Team. In her rookie campaign, Grashoff led Wake Forest with 13 goals and finished second on the team with 31 points.

Samantha Wexler: Over the past few weeks, the team has experienced great success both in ACC and NCAA tournament play. Can you discuss what you think the biggest reasons for success are?

Jule Grashoff: We experienced many ups and downs in regular season, but then in post season we really stepped up our game; we peaked at the right time. Going into ACCs, we knew we had to win the first game against Louisville and then the semifinal against Duke to even be considered for the NCAA tournament. We didn’t want it to be over yet, so we put everything we had in those two games, so we could potentially make NCAAs. And look at us now — we are in the Final Four, it is unbelievable.

SW: What were the team’s goals coming into the season and how has that played out through the start of postseason play thus far?

JG: Our goal was definitely to play in the NCAA tournament, which again was a big factor in our performance during ACCs. Especially as a senior, you do not want to end your season with a loss in the ACC tournament without even playing in NCAAs. Looking back at our last regular season games it is incredible to see how much we’ve grown as a team since then.

SW: You have come into your own as a scorer and leader of this team this year; what were main factors contributing to this growth this year?

JG: A lot of people, especially in our senior class, add some sort of leadership to this team. We have two incredible captains, we have many vocal leaders on the team and my leadership role is to be a performance leader — and this is exactly what makes us a Final Four team because we have an entire team full of different personalities and every single one is adding value to the best of their ability.

SW: With 24 goals on the year, you have been a presence in front of the net. What teammates have been the most impactful on your goal-scoring this year and why?

JG: Most of the goals I score come from penalty corners, so everyone who draws corners in the first place is making a really big impact. Then of course the corner execution with Kelsey Gill or Veerle Bos on the insert and Megan Anderson as our primary stick stopper have really critical roles too. Moreover, there are many teammates who set up me and others with great passes to score some field goals too.

JG: Getting off the bus when we got back from Duke, so many people were welcoming us to celebrate our huge win. The football team, both soccer teams and many more people, it was an incredible feeling and sharing this with other athletes was just unbelievable.

SW: What newcomers are particularly making a splash this year, and how are they impacting the team?

JG: The entire freshman class has made a big impact on our team this year. I would like to highlight Grace Sambrook, who has really stepped up in postseason. She can play in the midfield as well as on the strike line, and her ability to tackle and score goals is outstanding.