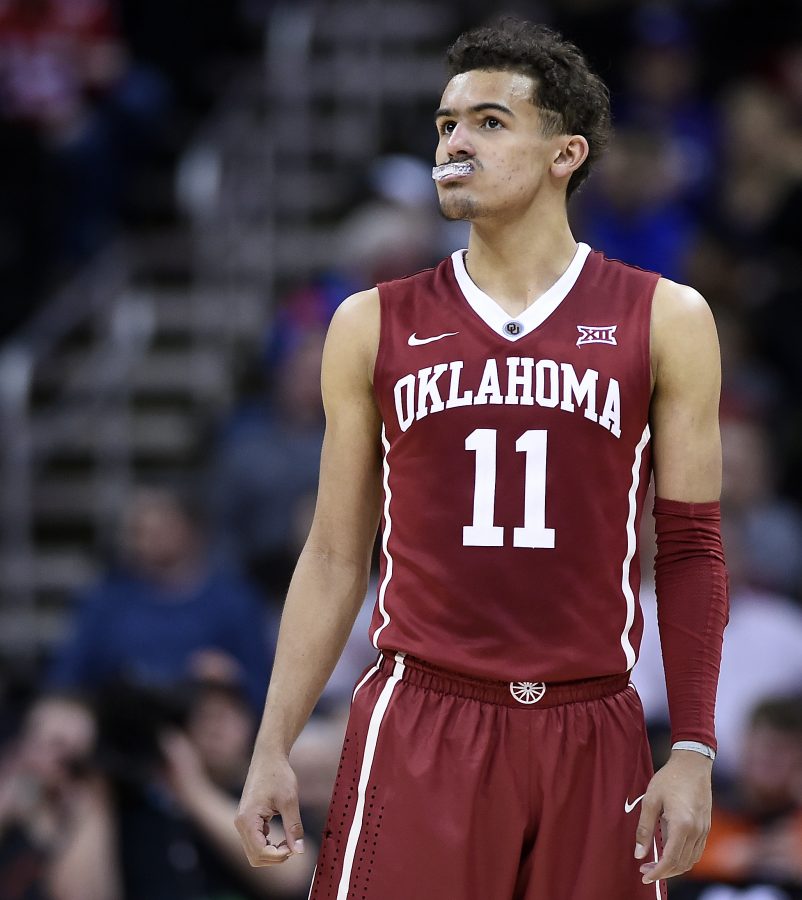 Oklahoma's Trae Young watches the final seconds tick off the clock during the second half against Oklahoma State in a Big 12 Tournament first-round game at the Sprint Center in Kansas City, Mo., on March 7, 2018. (Rich Sugg/Kansas City Star/TNS)

After Ben Simmons’ and Donovan Mitchell’s surprising rookie season last year, the rookies this season show off their potential as well after their first month of NBA experience.

Most of the top-pick rookies have been quality starters on their teams, and a few of them started to prove their abilities to be the franchise players for their teams, including Luka Doncic from Slovenia and Trae Young from University of Oklahoma.

The 19-year-old EuroLeague MVP is a strong candidate for the Rookie of the Year. As young as he is, Doncic has been fearless on the court and averaged team-high 19.6 points per game. 19.6 points was also the highest among all the rookies.

But scoring was not his only strength, as he had an all-around performance of 6.5 rebounds and 4.4 assists per game. In the overtime loss against San Antonio Spurs on October 29, Doncic made 11 shots out of 18 attempts, scoring his career-high 31 points efficiently.

In the following back-to-back game against the Lakers, despite the one-point loss, Doncic made the game-tie jump shot with just a few seconds remaining. His composure in a tight game like this was unparalleled among players at his age.

The advantage of Doncic over other rookies was that his performance was steady — he scored efficiently every night and he contributed through his passes and rebounds when he got a cold hand occasionally. For now, he seems to be capable of being another European franchise player for the Mavericks following his future Hall of Fame teammate Dirk Nowitzki.

Twenty-year-old Trae Young showed everyone his astonishing college performance was not a coincidence. While some doubted if Young could handle the physical contact in the NBA, Young quickly adapted it. He averaged 4.4 free throw attempts per game, and this proved his ability to drive in the lane and to make body contact with the opponents.

Young continued his well-known three-point ability in the NBA, despite a lack of stability. In a preseason home game victory against San Antonio Spurs on Oct. 11, Young made the game-winning three-pointer from the logo of the court.

However, during regular season, Young struggled to have a steady three-point performance. Although he made about two three-pointers per game, he was only 28 percent from behind the line. He could make six three-pointers in some nights, and immediately in the next game he could miss all seven attempts.

But Young adjusted his game style very fast. He had solid floater and layup abilities, and more valuably he had an excellent view to find teammates. In a home game victory against Miami Heat, Young sent out career-high 15 assists; in the 13 games he has played this season, he had double-digit assists five times. He averaged 8.2 assists per game, which ranked the third in the whole league and the top among the rookies.

The top-pick Deandre Ayton of Phoenix Suns was having a good season as well, averaging almost 16 points and 10 rebounds, which was the top among the rookies. However, his team struggled to show competitiveness and has only won two games so far.

As many as 10 rookies in total averaged at least 10 points per game, including Allonzo Trier of New York Knicks, who was undrafted and signed only a two-way contract with the team. As the season went on, the competition among the rookies might get even more intense.