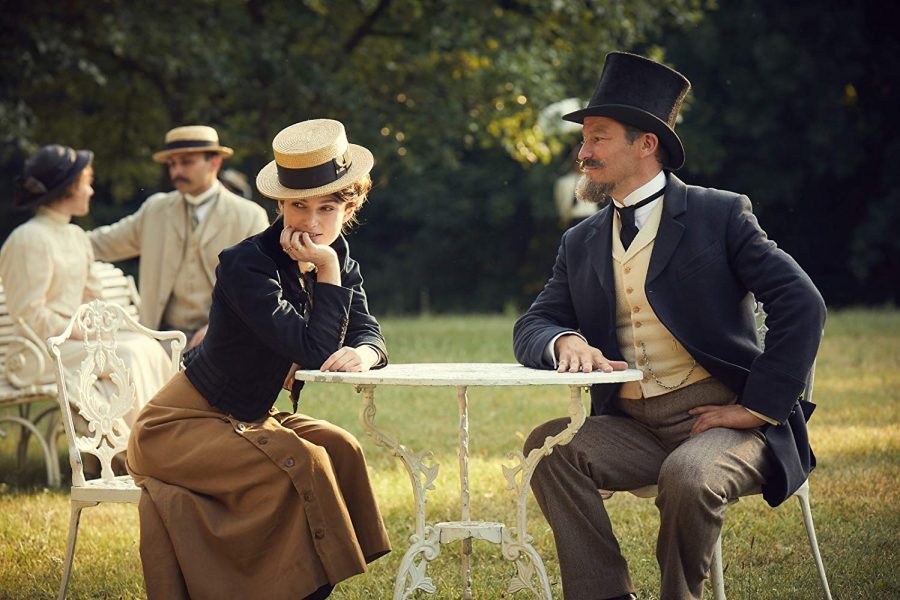 One can easily imagine how Colette, a film about a female artist whose literature and life is oppressed by her greedy, domineering husband, was green-lit by Hollywood execs trying too hard to capture the zeitgeist. It could have easily been a film of contrition, tedious and cold. Yet, thankfully, Wash Westmoreland (Still Alice) never really does this with Colette, a feat that may also have to do with smart producers like Christine Vachon on the bill. Although there are revolutionary ideas in Colette’s story, we get them within the nuanced confines of the late-19th, early-20th century milieu, not in what could have been a boring, ideological glean-job by meddling producer and insensitive director. The story is told for the story’s sake, and it is an engaging one of a woman’s harrowing detachment from men, money and ghost-written fame to artistic and personal freedom.

We begin in the provincial town of Saint-Sauveur-en-Puisaye, a rural French fairground where it seems Pan would have specifically liked his creatures to frolic. Here, we find Sidonie-Gabrielle Colette (Kiera Knightley) tending the garden and picking blackberries for her mother’s tart. Soon though, we learn that this young girl is being courted by Willy (Dominic West), a wealthy outsider qualified by his urbanity and bombast that is impressive to Colette and her family.  Willy wishes to sweep the ingenuous Colette away from the countryside into the urban environment of late 20th-century Paris to start a life of unconditional love. The two are innocently if movingly in love, despite class difference, and are soon married. Willy gives up his inheritance to start a literary firm in Paris, and the two, at first, resemble a young couple battling life together, like the Belfort’s before Jordan discovered penny stocks.

But Colette, upon moving to the city, is expectedly jarred by its libertine traditions — men seeking company out of wedlock, flirtation at parties to “stave off boredom.” Willy tells her that men are the lesser sex (although it’s obvious he doesn’t believe this), and that these perceived savageries are part of not only modern man’s coping mechanism, but the universal way of keeping the male psyche on an even keel. This emotional and physical promiscuity bothers Colette, as does her domestic consignment as a wife. When she finds Willy with a prostitute early on, she realizes she may be heading down a dangerous path, and must take charge before her identity dissolves. She demands to know things, to have Willy involve her in business, and it is here that we get the first inkling of Colette’s departure from the acquiescent woman.

As Willy’s firm begins to flounder, he deigns to ask Colette to write of her schooldays, thinking that her off-hand turns-of-phrase may make a decent novel. Her first draft of Claudine à l’école is one of Proustian reverie, detailing nature and feeling with such assiduous intimacy that her husband claims they can’t begin to publish the thing. It’s “too feminine.” So, the two begin injecting the salacious fodder Willy thinks his readership wants, and the book is eventually published, proceeding to quickly take the heart of Paris.

Colette goes on to write more Claudine novels, all of which sell, and the couple is tethered together by their period of proliferation (both commercially and socially, the two become ubiquitous). Colette goes from unknown ingénue to amanuensis for a literary titan. The percentage she contributes is still shrouded, yet her presence with Willy becomes necessary and voluminous.

But it may be difficult for a viewer to discern whether Colette is a serious novelist or nineteenth-century Danielle Steel. Part of the message is that her husband meddles to the point of unrecognition, but it also seems like the literary fame afforded to them both is not among the erudite; instead, it is the vapid aristocracy who launch what at times appear to be two local bodice-rippers into Fifty Shades status. That said, what mostly comes through is Willy’s manipulation of Colette’s literary skill into commercial triumph, and, it must be said, common literature in early-nineteenth century Paris is better than compared to anything today.

Yet still, in no way is Colette a film about a tortured genius. We do not get scenes of anger followed by fetal positions, nor do we ever really get extended moments of inspiration, as in Ed Harris’ Pollock, for example. In fact, Colette claims she hates to write, and even though there is an element of torture, it seems, to every great artist, we get the sense that what Colette desires most is freedom, not necessarily a specific, artistic kind, but an overall mental unchaining. Of course, one could accede this lack of artistic vitality to the fact that Willy locks her in a room several times in order that she produce a product, but, as I said, the film is more nuanced than those sort of simple answers, and that is what makes it worth pondering.

Although Colette could have been turned into the perfect politico-sexual amalgam, it never really does, at least not intentionally. The most interesting part is the nuance of Willy and Colette’s relationship. If the film is a political awakening of any kind, it is one that aims at nuanced conversation about the important matters of domestic economy. At the start, the relationship between Colette and Willy finds its passion where all new relationships do, in the prospect of a radiant future together. West plays Willy as a man at once enraptured and threatened by his wife’s revolutionary spirit, and is often tender. Yet, finally, he is dictated by the dynamics of the time, as well as his own greed. And although Knightley’s Colette is a slowly unfolding revolutionary, gaining almost Von Trierian faith, she initially shows great love towards Willy. Knightley’s performance is unflinching, but she still rightly allows for her visage to crumple under the weight of emotional havoc, especially in the face of her unforeseen domestic disaster.

There is a moment in the beginning of the marriage, where Willy lets a fart go in Colette’s presence. When she takes a playful affront, he comments that is it merely “intimacy in all its savage abandon.” It is a moment of marital acceptance that we have seen throughout countless films and novels, and in life, that forbids us to take this film as a political prop. It is a genuine exploration of how relationships go south, and how people deal with unexpected circumstances in their lives.

We get this, too, in the rousing final monologue, delivered by Knightley, which expounds on “the lucid hour,” a period of artistic ecstasy similar to what Paul Dano’s Brian Wilson refers to at the start of Love & Mercy. But it is also, in practical sense, an expatiation of moments of true human accounting, the vital inventory from which we make our decisive leaps into the unknown. The lucid hour is artistic fugue, but it is also the layman’s honest confrontation. And that is what we get in Colette, the story of an artist oppressed by the social and political constraints of the times, as well as a regular spousal awakening endemic to any couple’s maneuvering through life together. At one point, after Colette finds Willy with a prostitute, she returns to her mother in the country, deeply unsettled and sad. Her mother tells her not to get used to marriage, but to make marriage get used to her. It is this specific individuation that nods at the larger contours of human relationships. To approach partnership with authenticity and effort, honesty and adaptability, seems to be the only proper way to go on living.