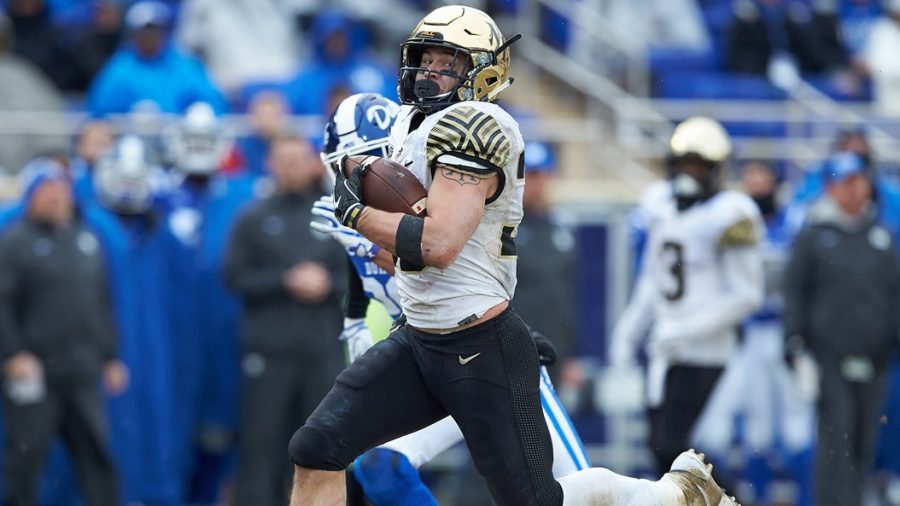 The Wake Forest football team has been through a lot of ups and downs this season.

In total, 13 athletes suffered season-ending injuries throughout the season and 38 missed significant time due to injuries. Among the injured are key players like starting QB Sam Hartman and pretty much the whole linebacker group.

So, it was understandable that the “We goin’ bowling!” chants had an added excitement to them, after the team’s bowl-clinching win on the road against Duke (7-4).

“I thank God every day that I get to coach at a place like Wake Forest and lead young men like we have. Every time our back was against the wall this year, we responded,” said Head Coach Dave Clawson during the postgame interview. “It just seems like every time we are in that position, we knew what was at stake. We made it like a playoff game. We had to get this one to continue our season, and we probably played our best game of the year. I couldn’t be prouder.”

Playing with their backs against the wall surely fits the description of this football team in 2018. After falling to Syracuse at home, the Deacs had a tough test to win two out of their last three games against then-ranked NC State, Coastal champions Pittsburgh and Duke to close the schedule.

After an all-time stunner at then No. 14 NC State, the Deacs needed a win on the road against a strong Duke squad that had wins against Miami and Northwestern to get to a 6-6 record and go to a third straight bowl game.

Yet, being an underdog on the road did not frazzle the Deacs, who came out clicking on all cylinders and jumped up to a 21-0 lead in the first quarter. Duke still answered back with a touchdown early in the second quarter, but after that, the Deacs would not allow any more points en route to a second-half shutout.

“We wanted it more than them, and it showed on the field,” said safety Nasir Greer who had a huge second quarter pick-six interception.

The defense surrendered only 251 yards the whole game while forcing four turnovers and racking up five tackles for loss. This comes from a defense that had its defensive coordinator fired midway through the season and allowed 43.6 points per game on average through their first five games in the ACC. The turnaround by this unit toward the end of the year is one of the primary reasons behind the Deacs’ two road wins against NC State and Duke.

On offense, running back Cade Carney had a field day, rushing for a career-high 223 yards and two touchdowns in 31 carries. Carney was the sole healthy running back with significant game experience during most of the game. RB Matt Colburn II did not play, and backup Christian Beal-Smith sustained an injury during the first half. Carney averaged 7.2 yards per carry while shouldering most of the offensive snaps, a truly remarkable effort by the junior running back.

Quarterback Jamie Newman quietly threw for 177 yards and four touchdowns while completing 18 of 23 passes. Ever since he filled in for injured QB Sam Hartman, Newman has been a steady presence in the backfield. Aside from a couple of bad reads against Pittsburgh that resulted in interceptions, the redshirt sophomore has been mostly calm and collected under center for the Deacs. In a couple of touchdown throws against Duke, Newman stepped up in the pocket and threw it as he got drilled by a Duke defender.

Receiver Greg Dortch was Newman’s main target with yet another great performance: 10 receptions for 124 yards and a touchdown. Dortch finished the season as the Deacs’ leading receiver in yards (1078) and touchdowns (eight) while racking up 1,750 all-purpose yards. He was also selected all-ACC first team as the league’s top all-purpose back and top return specialist.

The 59-7 win against Duke marked the largest victory margin against an ACC opponent in Wake Forest history.

“Certainly, it was the most complete game this year. Duke is a good football team. They were 7-4. They’ve beaten some good football teams. They are a very good team with an excellent quarterback, a good defense and a lot of offensive skill,” Clawson  said after the win. “I thought if we could get this game to the fourth quarter with a chance to win it, that was the goal. I never expected this.”

The Deacs will now wait until Dec. 2 to find out where they are going to play their third bowl game under Clawson. The most likely options are the Birmingham Bowl in Birmingham, AL; the Gasparilla Bowl in Tampa, FL; the First Responder Bowl in Dallas, TX; and the Independence Bowl in Shreveport, LA. Stay tuned for releases, updates and a matchup preview of the Demon Deacons’ bowl matchup.