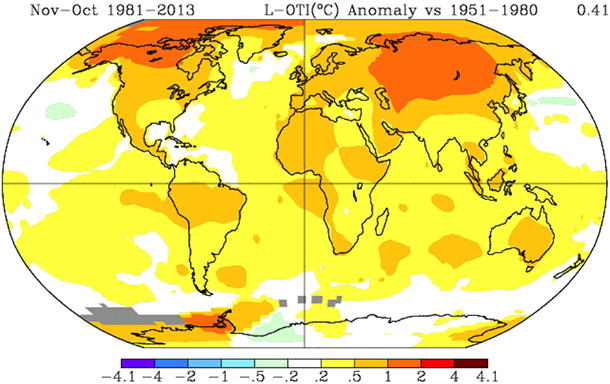 Marine ecologist Dr. John Bruno spoke about the effects of temperature on ocean communities to a packed room of approximately 100 faculty and students in Winston Hall on Nov. 26. His seminar, “Ocean Warming: The role of temperature as a process regulator in marine communities,” comes on the heels of the Fourth National Climate Assessment, completed earlier this month, for which Bruno was a contributing author. Bruno, a professor of biology at the University of North Carolina at Chapel Hill, conducts research on marine ecosystems in the Galapagos Islands, Belize and throughout the Caribbean.

In his seminar, Bruno focused on the role of temperature in regulating species interactions in the Galapagos. Bruno explained that in warmer environments, herbivores like fish, turtles, sea urchins and marine iguanas experience an increase in respiration and metabolism, causing them to consume more algae. Photosynthesis, however, does not increase at the same rate, so the algae do not grow enough to feed the new demand from the grazers. This reduces algal or plant biomass in these marine systems. In contrast, colder environments reduce the metabolic demands of herbivores and favor the growth of the algae.

The Galapagos are an excellent location to study these temperature-driven changes because of the natural cycle of warm and cold weather seasons driven by the El Niño Southern Oscillation (ENSO), a climate pattern in the Pacific Ocean. “El Niño” phases of the ENSO are warm in the Galapagos, while “La Niña” phases bring cold, nutrient-rich water up from the deep ocean. The influx of nutrients can make it harder to separate the roles of reduced herbivory and increased nutrients in algal growth during these colder periods. Bruno’s lab used caging experiments with specific quantities of urchins and algae to show that herbivory really does increase during warmer periods and decrease during colder ones.

Erynn Rebol and Jenny Howard are graduate students in Dr. Dave Anderson’s lab here at Wake Forest who also work in the Galapagos. Research from their lab mate Emily Tompkins was featured in Bruno’s talk. After the seminar, Rebol described one of her experiences in the Galapagos, which highlights the role of temperature in structuring marine communities:

“I went swimming in two different bays … less than half a mile apart. They were both extremely different in terms of what kind of ocean life was there,” Rebol said. “The biggest difference between them was the water temperature.”

Howard highlighted another important point from Bruno’s seminar, the implications of these temperature-driven changes for warming oceans worldwide. In the Galapagos, Howard and her lab mates study the Nazca booby, a seabird which feeds on small fish.

“The primary prey for the birds prior to 1997 were the sardines. And they aren’t going to be able to survive in the Galapagos with the temperature bumped up,” Howard said.

This means the boobies will have to depend on flying fish instead, which, as Rebol explained “are kind of trash fish in terms of nutrients and caloric intake.”

Even though Nazca boobies, like marine mammals and humans, regulate their own body temperature and may not experience directly the same temperature-driven metabolic shifts that cold-blooded herbivores do, they can still suffer as a result of those changes occurring elsewhere in the ecosystem. Bruno also pointed out that, as of now, the dynamics his lab has measured occur below the optimal temperature for these species, past which their survival and reproduction may be negatively impacted. Increasing ocean temperatures could eventually push species past that point and have dire consequences for marine ecosystems.