Nancy Pelosi Has Shown Us Why She’s The Democratic Leader 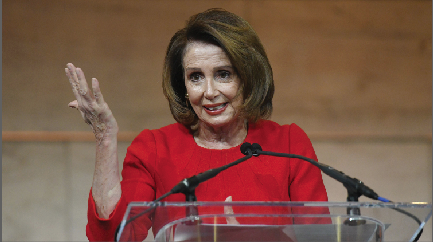 Rep. Nancy Pelosi (D-CA), the current Democratic minority leader in the House of Representatives, is about to face her first test in her bid to be elected the next Speaker of the House as lawmakers return to Washington.

This week, members of the Democratic caucus will have a secret-ballot vote behind closed doors to choose party leadership for the incoming Congress, most notably for Speaker of the House, majority leader and majority whip. Pelosi is expected to easily win a simple majority in this initial vote. However, the magnitude of intraparty opposition to a second Pelosi Speakership will indicate whether or not the California lawmaker has the votes to be elected in a public vote on the House floor in January.

To be elected Speaker on the floor when the new Congress convenes, Pelosi will need the support of a majority of all members present and voting. A numerical majority of the full House would equate to 218 votes; assuming that all 200 Republicans back current Majority Leader Rep. Kevin McCarthy, she can afford to have 16 Democratic defectors. But it’s possible that Pelosi could win with fewer than 218 votes if some members opt out by voting “present,” which would not automatically count for or against her, but would instead lower the majority threshold needed to be elected Speaker.

Taking this narrow margin of error into account, an anti-Pelosi letter currently circulating among the Democratic caucus has some Pelosi backers biting their fingernails. The group of critics has promised to vote for new leadership both in the closed-door vote and on the House floor. As of Nov. 27, the count of signatories totals 16 — precisely the amount of Democratic support Pelosi can lose and still have the votes to be elected Speaker.

At this point, opposition to Pelosi is difficult to justify. Many Democratic lawmakers — particularly the young female candidates of color who generated much of the blue wave — have expressed a desire for a new generation of leadership within the Democratic party. I couldn’t agree more. However, these progressive freshman lawmakers have also demonstrated that they understand the crucial, fragile nature of the next two years and the desperate need for an experienced hand to guide the party. As I expressed in last week’s column, this new generation of leadership needn’t be precipitated by a knee-jerk Pelosi ouster — she can preside over an orderly transition in 2020, and for now, she’s the disciplinarian that the party urgently needs.

There are many reasons to be cynical about this 16-member putsch, so don’t be deceived into thinking that the dissidents represent the new generation of Democratic leadership themselves. At a time when just over a third of the incoming Democratic caucus is comprised of white men, 13 of the 16 signatories are white men. The majority of the signatories are conservative Democrats who belong to the bipartisan Problem Solvers Caucus. Basically, they are using their votes as leverage to threaten Pelosi into agreeing to a set of House rules changes entitled “Break the Gridlock,” which would weaken Democrats’ majority power.

I would find the Problem Solvers’ objections more credible if they were veritably about supporting new leadership rather than making threats to secure rule changes. In addition, bold calls for “change” and “new leadership” ring hollow when there simply is no viable challenger to Pelosi. The only potential challenge to take seriously, Rep. Marcia Fudge (D-OH), dropped her bid for the Speakership and endorsed Pelosi after cutting a deal wherein Pelosi promised to reinstate a voting protection subcommittee eliminated by Republicans in 2013 and to name Fudge the chairwoman of that subcommittee. The Problem Solvers aren’t going to support McCarthy for Speaker, so with no reasonable alternative, by withholding support for Pelosi, all they will accomplish will be creating a fruitless stalemate on the floor in January.

A floor fight cannot emerge as the Democratic party’s first order of business. People stepped out to vote for Democrats in the midterms because they believed that Democrats could deliver on the issues that matter most — jobs, affordable healthcare, corralling a runaway presidency — and their confidence might be irreparably shaken if Democrats’ first move was an intraparty food fight. This debate threatens to divide Democrats precisely at the time when they need to be a disciplined counter to Trump.

And the bottom line is this: party politics aside, Pelosi deserves to be Speaker because she is exceptional at the job. When it comes to outmaneuvering her opponents and whipping her party into line inside the Capitol’s marble walls, no one else even comes close.