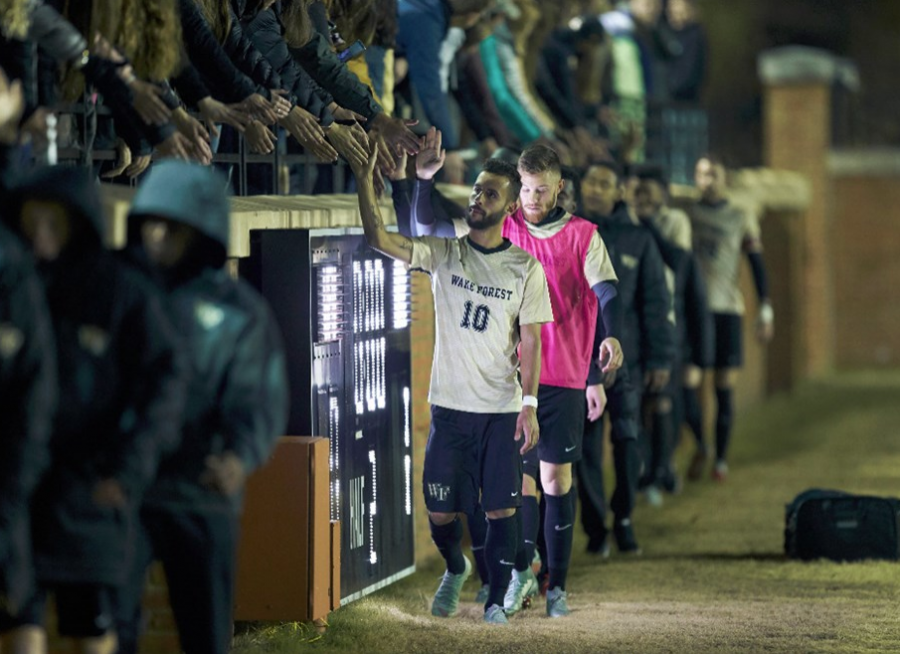 The top-seeded and No.2-ranked Wake Forest Men’s Soccer team saw their 2018 season come to a close on Sunday evening in the NCAA Tournament Round 16 after a 1-0 loss at Spry Stadium against No. 16-ranked Akron.

“That’s a tough pill to swallow,” said Head Coach Bobby Muuss. “But Akron did everything they needed to do to win so congratulations to them.”

Not only was this the end to the team’s season, but the final match as a Demon Deacon for seniors Brad Dunwell, Sam Raben and Logan Gdula, who led the team all season long. The team’s record during their time at Wake Forest has been 73-11-7.

“The staff, the guys, the facility, Wake Forest is unlike any other college soccer program,” Raben said after the match.

“Playing with these seniors has been an incredible opportunity” said junior defender Michael DeShields. “I don’t know what I’d do without them — they have nurtured me, they brought me into this program when I was a freshman, and they have taken care of me all these years. I can’t thank them enough.”

The first half went back and forth between the Deacs and the Zips, ending in a draw with four shots on goal for each team. Wake Forest, however, was out-fouled 19-6.

The second half was different. After only 51 seconds in, Akron’s Marcel Zajac fired a shot into the bottom left corner of the net off of a cross by David Egbo on the ground inside of the box. This one goal proved to be enough to enable Akron to move on to the Elite Eight.

“We were late on the backside, and the kid just got a toe to it,” said captain and defender Sam Raben, describing the goal.

The action-packed second half ended with the Deacs outshooting the Zips 9-2 and possessing the ball for the majority of play, even though they were not able to get the equalizer.

Despite the early goal, Muuss described this last 45 minutes as “one of the best second-half performances we have had all season” due to the way that the Deacs dominated.

While Wake Forest’s Aristotle Zarris, a freshman, was able to find the back of the net in the 89th minute of play off of a cross into the box by sophomore Machop Chol to tie the game, the goal was called offsides by the right linesman. Zarris was argued to have been just a step in front of the last defender when the ball left Chol’s foot.

“They played to the final whistle,” Muuss said. “How could you not be proud of them?”