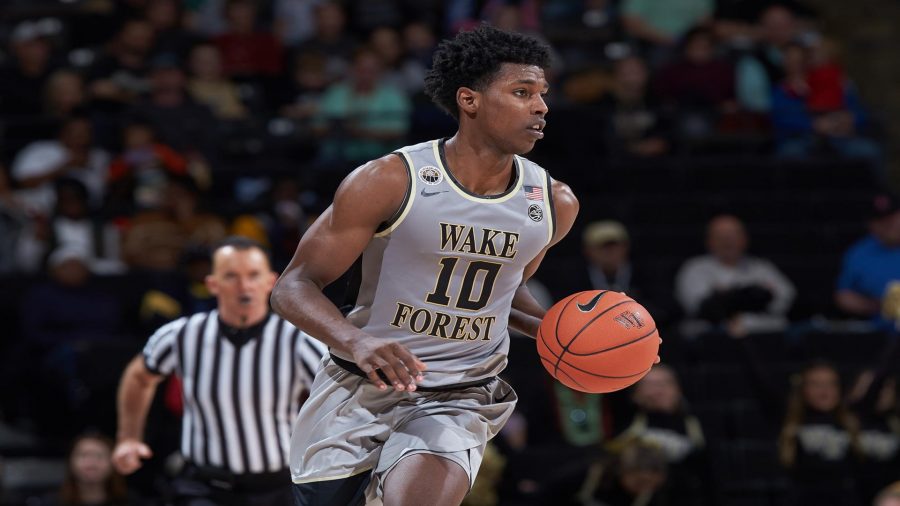 Since the last publication of the Old Gold & Black, the Men’s Basketball  team has played five games, winning three of them to compile a 4-2 record overall. Wake Forest first traveled to South Carolina on Nov. 15 to participate in the Myrtle Beach Invitational.

Play began with a loss against a hot shooting Saint Joseph’s squad in round one, as the Deacons succumbed to the Hawks by a score of 89-69. Saint Joseph’s shot a blistering 53.3 percent from downtown. Their 16 threes tied the Wake Forest school record for most three-pointers allowed.

The Hawks were led by sophomore forward Charlie Brown Jr., who made four threes en route to 26 points on the night. For the Deacons, freshman forwards Jaylen Hoard and Isaiah Mucius led the team with 14 points. Wake Forest struggled from within the three-point line, making only nine of 26 shots while shooting 44 percent from downtown on 25 attempts.

The Deacons then moved onto the fifth-place game, where they dispatched Valparaiso 69-63. A Crusader layup closed the gap to two points at 54-52 before the Deacons ripped off an 11-4 run to secure the victory. Freshman led the way again for Wake Forest, with Hoard, Mucius, and forward Sharone Wright Jr. combining for 39 points.

Five days later, Wake Forest welcomed an unimpressive Houston Baptist (2-3) squad to the Joel Coliseum. Coming off of two huge losses by 30+ points to Arizona and Wisconsin, the Huskies were simply looking to remain competitive against the Deacons. They wound up completing the improbable task of beating a more talented Wake Forest team, shocking the Deacons with a 93-91 victory in overtime.

The Deacons led by 14 points with nine minutes remaining in regulation before crumbling down the stretch, failing to score a field goal and committing six turnovers. Sophomore guard and North Carolina native Ian DuBose hit the game-tying three with 0.5 seconds left to send the game to overtime.

Wake Forest appeared to regain its composure in overtime, taking a 91-87 lead before giving up six straight points to end the game. After the game, coach Danny Manning said, “All losses are tough. This one definitely stings.” Childress led the Deacons with a career night, scoring a personal best 27 points with five assists and four steals in a staggering 44 minutes.

Wake Forest looked to right the ship this past Tuesday against Western Carolina (2-6) in the two programs’ first-ever matchup. Wake Forest started hot, leading 21-3 early on. The Catamounts fought back with its own run of 14-2 to pull within six at 23-17. The teams went back and forth until the end of the second half.

Wake Forest led by a slim 67-64 margin until clutch steals by Hoard and Wright Jr. led to four consecutive free throws for the Deacons, securing a 74-71 win. The Catamounts failed to help themselves, missing 16 of 32 attempts at the free throw line and turning the ball over 19 times. Childress and Hoard led the Deacons once again, scoring 20 and 17 points respectively.

Speaking on how close the game was at the end after leading early, Manning said “That’s college basketball. You know, it just happens. Tonight we led the game for 37 minutes and we lost the lead late in the ball game. I’m happy and proud of how the guys continued to fight, especially those last minutes. Isaiah (Mucius) comes up with that big deflection steal and Jaylen (Hoard) comes up with a loose ball for us as well. Thought that was obviously very key for us.”

After four straight close games, Wake Forest will look to play up to its ability against the Richmond Spiders (2-4) on Saturday at 7 p.m.